How glorification of martyrdom produces child suicide bombers in Turkey

A majority of Turkish children are exposed to Islamic education and media indoctrination that glorifies martyrdom. 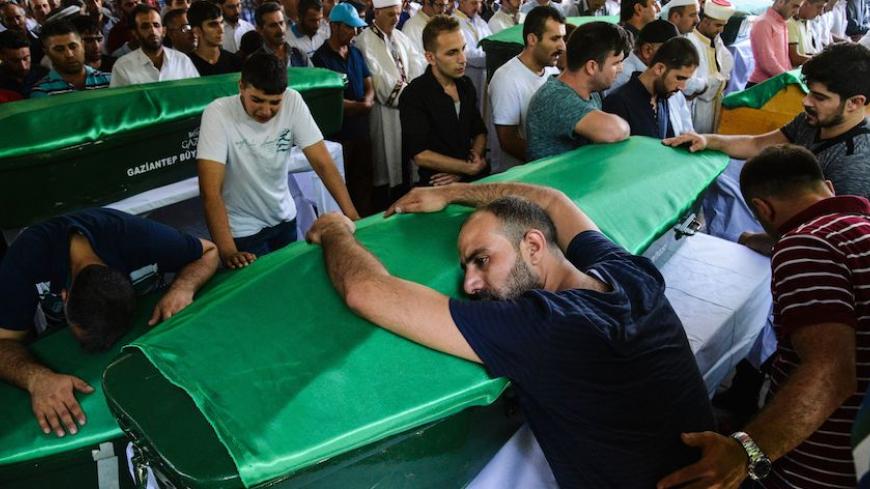 A man places his arms and head on a coffin as people mourn during a funeral for victims of the attack on a wedding party that left more than 50 dead in Gaziantep in southeastern Turkey near the Syrian border, Aug. 21, 2016. - ILYAS AKENGIN/AFP/Getty Images

On Aug. 20, news broke that an outdoor wedding celebration was attacked in Gaziantep, in southeast Turkey, on the Syrian border.

The attack left at least 57 dead and dozens wounded. Turkish President Recep Tayyip Erdogan informed the press that the Islamic State (IS) was suspected in the attack and that the suicide bomber was a child aged 12-14 years old. Erdogan added that authorities were not sure whether the child had blown himself up or the bomb was activated remotely.

A day later, however, Turkish Prime Minister Binali Yildirim retracted this piece of information, claiming that the government was not able to identify the bomber, and that therefore he could neither confirm nor deny that the perpetrator was a minor.

In almost all other suicide bombing incidents, Turkish authorities have been able to confirm and publicize the identity of the bomber within the first couple of days. However, this time, after several days, we still do not have the name or names of who was responsible. Initially, local people told the press that in this small neighborhood everyone knows each other. They said two men and a child entered into a little market and bought a bottle of water for the boy. Two days later, it was reported that a woman in a veil and a man made a boy push a bomb-loaded baby carriage into the wedding crowd.

The situation gets more complicated as we try to understand the setting. First, it was a prelude for a wedding, called the henna night. This is similar to a bridal shower, where mostly women and children attend. Hence, the majority of the victims were kids and women. The festivities were also being held on the street, which is traditional and more economic in suburban neighborhoods. It is thought that IS targeted this henna night because of the majority of Kurdish women and children at the celebration. These are the most vulnerable sections of the society, commonly targeted by IS in other parts of the region as well. IS did not claim the attack, but that has been pretty much the norm for their operations in Turkey.

The Turkish public started to question the horrifying possibility that children were now carrying out missions to terrorize people. The possible shock for this new face of terrorism, however, wore off quickly. How Turkey got so used to the idea of child suicide bombers can be explained on both the regional and domestic levels.

The Turkish public was distraught but not shaken by the child suicide bomber news, mainly because in the last decade it has become the new normal for the region. “Anyone and everyone can be used, even a corpse,” said a lieutenant general from the Turkish Armed Forces, who asked to remain anonymous. The general added, “We have become calloused to the news from Boko Haram, al-Qaeda, IS and others. Turkey experienced a female as a suicide bomber and knows about child IS recruits along with those of the PKK [Kurdistan Workers Party].” So the regional aspect generated a sort of a shield for Turks against the strong shock effect.

Next are domestic factors that are indeed stronger than regional ones. Turkey has been experiencing a prolonged session of hyped-up nationalism and glorification of martyrdom. Given that Turkey has been at war with the PKK for the last four decades and with IS in the last year, one can expect this to be normal. However, the glorification of martyrdom has been encouraged and stimulated for a decade beyond the reasons of combating terrorism. This hype is particularly affecting youths.

Indeed, Erdogan and the Justice and Development Party (AKP) have always enjoyed the rhetorical statement “We have embarked upon this journey with our shrouds,” trying to signal to the public that they are willing to die for their cause. As patriotic as it may sound, when these words are paired with images of men wrapped in white cloth at AKP rallies, it could have a terrifying impact on minors.

A family health official, who works for an AKP municipality in Istanbul, told Al-Monitor, “We witness children between the ages of 4 and 14 frequently in two categories: Either they are acting extremely bold and aggressive in ways that could physically hurt themselves and those around them, or they are on the other side of the spectrum with a sincere phobia, what we call death anxiety. One child complained, for example, 'I wake up suffocating.' Later, we found that he was scared his parents would kill him so that he could become a martyr.”

The depth of the children’s fears and anxiety can be better understood after seeing the intense indoctrination of Turkish youths through the publications of the Religious Affairs Directorate (Diyanet). For example, in one Diyanet publication in April, there were three separate controversial cartoons.

In the first one, a preteen boy asks his father, “Would you like to be a martyr, Daddy?” His father replies, “How blessed it is to be a martyr. Who would not want that, who would not want to reach heaven?” In the next one, a young girl salutes like a soldier and says, “I wish I could be a martyr.” Her brother replies, “Girls cannot join the army,” but the mother intervenes and says, “If you want it so much, my dear daughter, God will grant you that wish.” In the last one, a young boy and his father appear at a graveyard decorated with Turkish flags. The young boy says, “They must have suffered so much before falling martyrs, right, Dad?” The father replies, “Son, martyrs don’t suffer in the way that you envision.” Alongside each of these drawings there is a quote from the Prophet Muhammad.

Turkish State Television (TRT) has also been doing its part. In November 2015, TRT aired a documentary claiming to document the Syrian civil war. In an effort to portray Syrian President Bashar al-Assad as the evil against Islam responsible for all the atrocities, the producers interviewed several Syrian refugees. One of them was a young girl who had lost her father in the war. The interviewer asked her, “What would you do if you had to fight?” She replied, “I would blow myself up at a checkpoint.” Turkish opposition parties made this section of the program the focus of a parliamentary inquiry in March, and after the Gaziantep bombing, the young girl’s image appeared on social media with harsh criticism about utilizing taxpayer money to advocate self-sacrifice.

It is quite ironic that in a country where Pokemon was banned due to its harmful effects on children, there are now thousands of imam hatip schools where children are indoctrinated to walk to their deaths without fear. There are several videos of school plays or other activities from these schools where kids sing and march declaring they wish to be martyrs.

After the attempted coup, nothing could abate the martyrdom zeal in Turkey. At every possible instance, Erdogan and his men told people that they wish to be martyrs and that they are even jealous of those who reached this status, adding that every inch of Turkish soil should be washed with the blood of the martyrs. Watching all this passionate rhetoric combined with a formal education system focusing on self-sacrifice, one cannot help but be fearful of its possible consequences for Turkey’s future.