After decades of carefully guarding its treasures, the Tehran Museum of Contemporary Art is uploading its priceless collection of contemporary art. 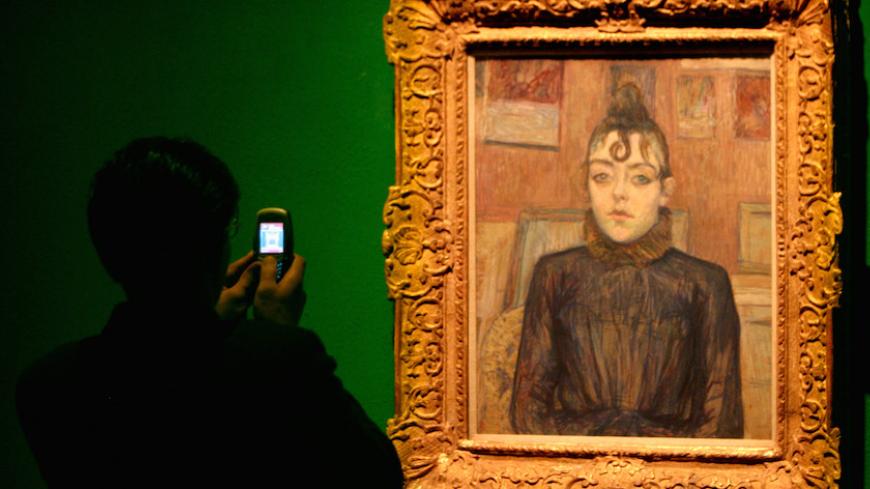 An Iranian man takes a picture of a painting by 19th-century painter Henri de Toulouse-Lautrec during the Modern Art Movement exhibition at Tehran Museum of Contemporary Art in Tehran, Aug. 29, 2005. - REUTERS/Morteza Nikoubazl MN/JJ

The Tehran Museum of Contemporary Art (TMoCA) is considered to have the most valuable collection of Western modern art outside Europe and North America. Tucked away in the museum’s 40-year-old treasure vault are such masterpieces as Picasso’s "Artist and His Model," Francis Bacon’s "Two Figures Lying on a Bed With Attendants," Andy Warhol’s "Suicide," Vincent van Gogh’s "At Eternity’s Gate,” Jackson Pollock’s "Mural on Indian Red Ground" and many, many more treasures.

Work is underway to showcase all of the artwork housed at the museum on its website. However, until this process is complete, there will be no permanent displays of the pieces due to what has been described as a lack of space as well as “cultural issues.” There have also been numerous reports in the Iranian media during the past year about some art being stolen but eventually returned.

The idea for the impressive art collection at TMoCA came in 1966 from Farah Pahlavi, the former queen of Iran. The museum itself was designed and built by Kamran Diba — a prominent architect and a cousin of Pahlavi — and inaugurated in 1977. The galleries were designed in such a way that light enters through windows that are reminiscent of the famed wind-catchers in the ancient city of Yazd.

In an interview with Al-Monitor, Bahram Dabiri, an Iranian painter and artist, said, “The key factor about the purchased pieces was that not only did they have the signatures of famous and distinguished artists, but they were among those artists’ most recognized pieces. For instance, there were works by Rene Magritte, Henry Moore, Pablo Picasso and more.”

The artwork was displayed at TMoCA up until Iran’s 1979 Islamic Revolution. The pieces were then moved to the museum’s basement for safekeeping, but a portrait of Farah painted by Andy Warhol as well as a nude by Iranian painter and sculptor Bahman Mohassess were destroyed by the revolutionaries.

The museum's director was said to have provided the revolutionary forces with an inventory of all the artwork kept at TMoCA. However, neither this list nor any other inventory of the vault has ever officially been released.

Nearly 38 years have passed since the revolution, and during that time, the museum has seen repeated changes in management, governments and the scope of its own activities in line with changing cultural policies. Yet through it all, the collection in the vault has managed to remain intact. Dabiri told Al-Monitor, “If untouched, it is a valuable treasure that Iran’s artistic community has concerns about.”

In 2015, the head of the Culture Ministry's Visual Arts Department, Majid Mola Norouzi, confirmed rumors of the theft of 27 contemporary pieces from the museum. After their successful return, the stolen art was put on public display at a gallery in Tehran to remove any doubts about its safety. The pieces included works by Mohassess, calligrapher Reza Mafi, painter Farideh Lashai, painter and sculpture Charles Hossein Zenderoudi and illustrator Ardeshir Mohasses, among many others.

Speaking to Al-Monitor, Amir Rad, who directs the museum’s new media center, highlighted TMoCA’s high security. He said, “The museum vault is like a large box that is very safe. The bureaucracy seen in everyday dealings in Iran is even more intense at the museum. Removing or bringing in any work of art from the museum requires several rounds of communication and numerous permits. I think the vault is an untouched treasury.”

Rad added that such concerns have always existed — concerns that he and other officials at the museum hope will be alleviated once the digital versions of all the artwork are put on virtual display. Rad, who is heading the project, said, “The plan is to eventually upload all the pieces onto the website along with up-to-date information. We are also thinking of offering special services to researchers and curators. As of now, 60 art pieces by foreign painters have been uploaded to the website.”

Some of the work currently deemed unsuitable for display will remain so. These include "Gabrielle With Open Blouse" by Pierre-Auguste Renoir, Bacon’s "Two Figures Lying on a Bed With Attendants" and other paintings by Picasso and other artists that contain nudity. Rad said, “Of course, we will put them on the website, but the parts that are not suitable for public showcase will be faded out. After all, the museum is part of the Ministry of Culture and Islamic Guidance and has to abide by certain policies. I should mention that there are no more than 20 such pieces, and only four or five of them are famous.”

The TMoCA is finding new life with its impressive collection of art now being put on temporary display. There is also a tentative agreement with the German government to send 60 pieces from Tehran — 30 Western and 30 Iranian — to Berlin for a three-month show this winter.

According to Rad, such exhibitions could be a way for the government-owned museum to generate income — earnings that under Iranian law must be directly deposited into the government’s treasury. He said in this regard, “The museum has a lot of financial problems. That’s why the techniques used for preserving the art are based on the standards of 40 years ago. These standards are good, but because they have not been updated, they lag behind global standards. Our plan is that in return for holding exhibitions such as the one in Berlin, we will receive services that will help improve the quality of our preservation, such as improving the ventilation system at the museum.”

The treasures held at the TMoCA are said to be valued at around $3 billion, and there is no more space for new artwork. Many art experts in Iran are of the view that 40 years after its establishment, the museum's collection is not just contemporary, but modern — a view Rad shares. “By establishing different centers at TMoCA and holding exhibitions, we are trying to bring it closer to the contemporary art movement. This means that from now on, contemporary works will be [displayed] using contemporary media [such as digital],” he said.