Prime Minister Haidar al-Abadi has instructed the Interior Ministry to take measures to remove signs of militarization from Iraqi cities. 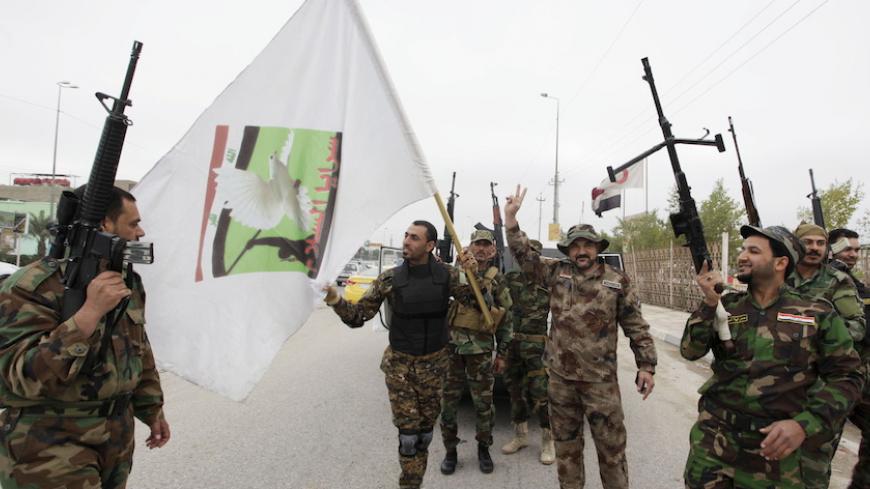 Shiite fighters from Saraya al-Salam, who are loyal to the radical cleric Muqtada al-Sadr, gather in the holy city of Najaf before heading to the northern Iraqi city of Tikrit to continue the offensive against Islamic State militants, March 20, 2015. - REUTERS/Alaa Al-Marjani

BAGHDAD, Iraq — The Iraqi government recently announced the launch of an effort to remove signs of militarization from the country's cities. The Interior Ministry issued a statement July 17 to that effect, based on directives from Prime Minister Haider al-Abadi, that included such measures as reducing the number of checkpoints and relocating military bases and offices outside the cities.

“Arms have been in the streets and at checkpoints, and men in military uniforms have been deployed in the cities since the 1970s,” said Walid Youssef Atto, a researcher on Iraqi history. The militarization intensified significantly with the recruitment of additional soldiers for the paramilitary People's Army after President Saddam Hussein launched the war against Iran in 1980. Following Hussein’s ouster and the 2003 US-led invasion, the militarization of civil life again increased, perhaps peaking when the Islamic State (IS) took control of Mosul in June 2014, and Grand Ayatollah Ali al-Sistani's call for Iraqis to mobilize against the extremists led to the reconstitution of previously disbanded militias and the formation of new ones.

“Visible signs of militarization in the cities intensified by both parties, IS fighters and militias members fighting IS,” Jassem al-Moussawi, a political analyst told Al-Monitor. “The militarization has [also] increased due to the war on terrorism. … On the other hand, the security forces are weak, but they are deployed in all parts of Baghdad, which promotes the presence of arms in the streets.”

Concerning the future of militarization, Moussawi said, “It is linked to the country’s security situation, the end of the war on IS and on whether or not new conflicts emerge, leading to the formation of new armed factions whose activities and presence overshadow those of the civil state institutions.”

Shabib Midhati, an activist in Baghdad, commented, “I am an eyewitness to the militarization and transformation of the community into a military barracks, the spread of weapons and military mobilization in the streets, schools, and social and religious activities,” he told Al-Monitor. “Visible signs of civil life, such as art galleries, music concerts and sporting events, are rare and receive little attention from either the state or public.”

Midhati added, “In Babil, there are no cinemas, no theaters, no billboards or artistic signs symbolizing civil life. They were replaced with signs calling on the people to join the war against IS.”

“The visible signs of militarization in the cities point to security vulnerabilities and problems,” Youssef Kallabi, a commander of the Popular Mobilization Units (PMU), told Al-Monitor. “The PMU are not responsible for these signs, as they are not present in the cities, but rather on the battlefields. If any of the fighters displayed any visible sign of militarization, it would be an individual behavior.”

Saad al-Matlabi, a member of the Baghdad City Council's Security Committee, dismissed Kallabi's assertion that PMU elements were not in the cities. “Some parties took advantage of the threat posed by IS to preserve their presence in the cities, including Baghdad,” Matlabi told Al-Monitor, without naming names but apparently referring to the PMU. Matlabi further asserted, “Whoever wears the PMU uniform in Baghdad should be arrested under the law and referred to the judiciary to be held accountable.”

Matlabi wants all armed forces and factions to withdraw from residential areas. “There is no need for them to be present in Baghdad, and their job is to be present on the battlefield or the Baghdad belt,” he said. “Their presence in the capital is a threat [to civil and civilian life].”

He added, “The Baghdad Operations Room conducted a study on reducing the number of permanent security checkpoints in Baghdad and replacing them with temporary ones as a step toward reducing signs of militarization in Baghdad.” Matlabi did not indicate whether the study's recommendations will be or have been partially implemented.

Ali Sultani, a PMU member, justified visible militarization in the cities, telling Al-Monitor, “Military uniforms and the display of arms in the street help citizens feel safe, letting them know that there is an armed force protecting them. The militarization is an irregular situation generated by the efforts to mobilize the community to defeat IS.”

Iraqi army Col. Abu Ali Hamzaoui told Al-Monitor, “The community is increasingly being militarized, due to the feeling that there is a need to take up arms given the existing insecurity. Since 2003, weapons have been accumulating in the cities and among tribes in the countryside, which can be seen in the heavy presence of arms in family conflicts and at events.”

Majid al-Gharrawi, a member of the parliamentary Security and Defense Committee, commented, “It is hard to eliminate the visible signs of militarization in the cities due to the war against IS.” He also remarked, “There is a need to invest in the many military positions in Iraq, particularly abandoned posts, by turning them into parks and tourist facilities, banning the carrying of arms in the cities, except for the battlefields, and prohibiting military mobilization activities at schools.”