Millionaire MK's plan: Partners in business will be partners for peace

In an interview with Al-Monitor, Knesset member Erel Margalit argues that Israel should focus on joint regional economic ventures to build confidence, and from there advance to negotiating with the Palestinians. 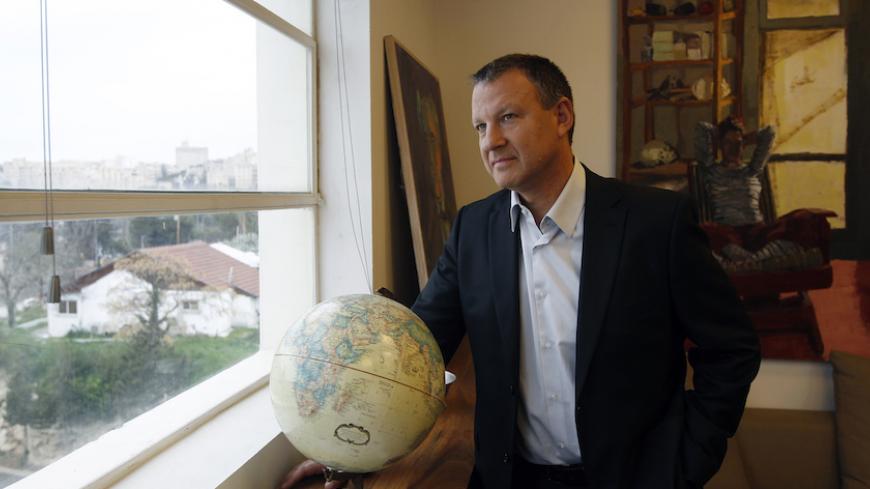 Founder and managing partner of Jerusalem Venture Partners Erel Margalit poses for a photo during an interview with Reuters in Jerusalem, Jan. 30, 2012. - JERUSALEMVENTURE/REUTERS/Ronen Zvulun

In recent months, Knesset member Erel Margalit (Zionist Camp) has flown almost every weekend to meetings, most of them secret, with "senior business and political figures" in the Arab world, as he puts it, and tried to market the "common interests plan." This new diplomatic plan he envisioned is based on economic cooperation between all of the region's nations. Written in Arabic and translated to Hebrew, the plan has been distributed to "thousands of decision-makers in the Middle East."

The move is part of his early campaign for the Labor leadership (the main partner within the Zionist Camp) — a primary election that has been postponed until July 2017. In the meantime, the polls foresee a collapse of Labor (Army Radio predicted on Aug. 7 the Zionist Camp will win only eight seats compared to the 24 it won in the 2015 elections). But this collapse could provide the tailwind that Margalit needs in his battle for leadership of the party. In other words, the weaker Labor head Isaac Herzog becomes, the better for Margalit. Can Labor be revived? That's another question.

As part of the campaign, Margalit, a tech millionaire and founder of the venture capital fund Jerusalem Venture Partners, is trying to translate his business success to the political and diplomatic arena. In a July 31 press conference where he revealed his plan, he said, "We need to stop talking about 'peace,' imagining flowers and butterflies and laughing children. Whoever tries to sell this romanticized vision cannot truly bring about a settlement." In an interview with Al-Monitor, Margalit explained that he hasn't abandoned the idea of two states and the negotiations toward a permanent agreement, but that it isn't the time for it, and that first we have to leverage the economy for the sake of trust-building measures.

Al-Monitor:  Who are you meeting with? In whose name are you speaking?

Margalit:  These are mostly quiet talks and I can't expose the people I'm talking to. But I've had many meetings abroad, and I make sure there are meetings abroad. These are very senior figures who are curious about the model that I present: joint regional projects. Nine nations have invested in my fund, and of course that helps in these talks. These folks can move things 10 times better than governments can.

We look at the Middle East through a rifle sight. But what really moves things is economic factors. I can say that I presented the plan to very senior political and economic figures — it's a very concrete plan. It's based on the regional idea — the Arab League's initiative — and it actually goes beyond the usual equation of us and the Palestinians and involves other states.

Anyone who does business knows there's some crazy investment right now by the Chinese, the French and the Russians, and slowly also the Americans entering Iran with long-term projects, and that's worrisome, but there's no doubt that this is the moment to present the new equation in the Arab world.

Al-Monitor:  And the new equation ignores the bilateral negotiations between us and the Palestinians?

Margalit:  What I wish to do is invert the pyramid. First we'll build trust and relations with Arab nations and then we'll work on an agreement with the Palestinians. Right now it's impossible to present anything concrete to the Israeli public and to the Palestinian public, nor to the surrounding nations, whom we also need for an agreement.

The more I present the plan, I discover that I have more partners for the idea in the Arab world. We're talking with the Egyptians about a big water project because it's an acute problem there. The idea is that we don't expect the government to be the big investor. We start to work because we have the ability to do so. We approach the governments when everything's already fully baked.

In effect, I'm talking about Israeli, Palestinian and regional interests while talking about the Palestinian issue. I don't separate things. These are not empty words; we really identify projects for investment.

Al-Monitor:  But does your plan ignore the acute problems of the settlements and the refugees? Have you given up and adopted the crisis management approach of the right?

Margalit:  I'm willing to talk about it [with the Palestinians] but I don't want it to be the immediate and first topic of discussion.

I say to the Palestinians: Come to the table and let's talk about specific and concrete economic issues, about your quality of life. Now, from moment to moment — not in a year. It's the sort of confidence-building measure that the system has lost. We can't advance anything now without building trust through a series of concrete steps. For instance, Gaza: There's a big plan that I can't disclose for now. But before that there are some little things we can do. For instance, all of Gaza's sewage flows to [Israel’s] Zikim Beach, because of electricity and water problems, and in [the nearby Israeli city of] Ashkelon, they pump water from the sea that's full of sewage. So why not organize the electricity system so that sewage is treated and doesn't flow to our water? It's not a big move but it’s very important. On the humanitarian level it would get a lot of points.

Al-Monitor:  But doesn't such an approach ignore the problems at the heart of the conflict, which is a national and territorial one?

Margalit:  For [a diplomatic process] to happen we have to start with something, and it has to be something concrete. We can deal with desert agriculture even without the government and thus build trust toward the country. We have to understand that governments are pretty limited, and that the elements that have to present the concrete business plans are specific local leadership and the business sector. Clearly I want to solve the conflict. The moment you frame issues within the economic and security arenas you have a partner to talk about the big things.

Margalit:  The Palestinian Authority is a partner, a partner who is going through tough times now. In October they'll have municipal elections and it's a dangerous moment when Hamas could take over local authorities. From my standpoint, the Palestinian Authority is a partner, but with whom it is currently very problematic to work. Still, we have to remember that cooperation with the Palestinians is good and constructive and that the more we strengthen our security connections we save ourselves from actions that we would have to take.

Al-Monitor:  What's your position on the settlements? Jerusalem?

Margalit:  My position is very clear. There are three central blocs that have to stay [under Israeli sovereignty]. Today I'm also developing the economic plan in Maale Adumim, Ariel and Gush Etzion because I believe in these [settlement] blocs. We have to [make the blocs more dense] and to insist on [doing so] with the Americans and Arab nations. Next to each such bloc, you build a joint industrial zone, part of which is on the Israeli side and part of which on the Palestinian side. There's a model like this in the Gilboa [village of northern Israel] and [the West Bank Palestinian town of] Jenin.

As for Jerusalem, it's very complicated and I'm not dealing with it right now. But the way to advance things is to move on from assumptions regarding the contents of the plan and only after to talk about borders. The contents: Jerusalem should be an Israeli center of excellence for technology and other fields, and turn into a center of Arab Palestinian excellence. In addition, we have to create the infrastructure for large international investments in Jerusalem.

Al-Monitor:  What impression do you get from your meetings in the Arab world of the atmosphere regarding the Israeli-Palestinian conflict?

Margalit:  Older people are skeptical, but when I talk about the economy with young people there's a curiosity and they want to hear more. Several times at conferences people from the audience approached me. Recently a senior Tunisian figure from the new generation approached me and told me: You have to come to us, we're now the first democracy in the Arab world and if we don't cooperate economically now, we'll be in trouble. The young people say that they are challenged by two threats: First, all the money is flowing to Iran now and no one talks with them, and they understand that Israel is key. Second, they're really afraid of cyberterror and see that Israel has clear solutions in the fields of aviation, electricity, banking and civic infrastructure. And of course there is the threat of the Islamic State. They understand that alone, it will be hard for them to stop it.

Al-Monitor:  Despite his weakness, Herzog defeated you and former Labor head Shelly Yachimovich in the Labor Party conference, which accepted his suggestion to postpone the primaries. What went wrong?

Margalit:  Nothing. We knew it would happen, and it didn't surprise us because the Histadrut’s people were there. What's important is the message that came through: Anyone who wants to remove [Prime Minister Benjamin] Netanyahu can't give him another year. We set a framework for a date, so we more or less know the rules of the game.

In our polls, I overtook Herzog a long time ago and so I know I'm going in the right direction. After all, the election is not at the Labor Party conference but at the primaries of all members, and they're influenced by the general public. That is to say a weak candidate has a problem.

I feel that I've grown stronger in the party and in the faction. Every other day I'm at another huge event throughout the country. All the main activists come and young people also come to hear what I have to say. So although the party is in a difficult spot among the general public, we still find an optimistic dynamic where the rival is Netanyahu.

But as long as the Labor Party is in a coma, other elements like [Yesh Atid head] Yair Lapid take a bite out of its electorate. We have to change course in the economic field as well. In the last election most of the party talked about bringing down folks who have been successful, and success became a bad word. We turned into the party of the social protest and we have to go back to being the party that builds the nation and not a cliche. We are 10 times better at it than the Likud.

Al-Monitor:  Are you worried about the possibility that Herzog would try to join the government again?

Margalit:  You bet I'm ready for it. I'm already seeing the next attempt, but we'll fight it.