Despite ongoing quarreling over Iran’s long-delayed new oil and gas model contracts, the issue finally seems set for a resolution. 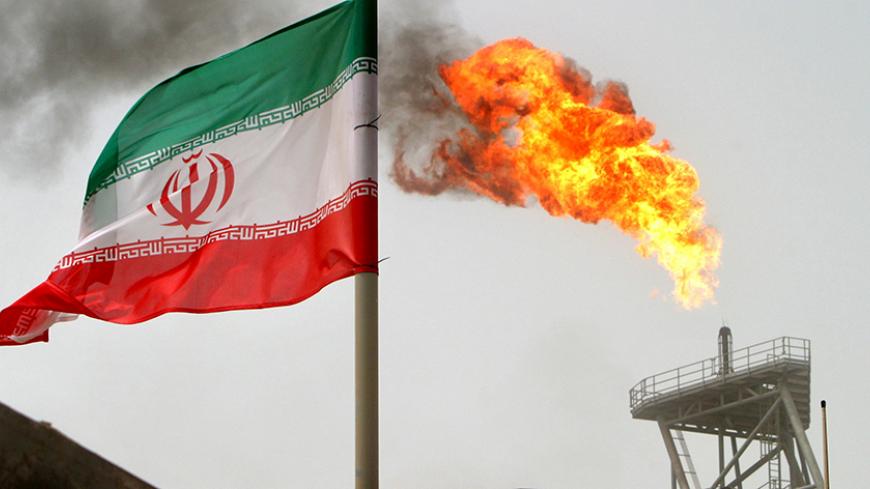 A gas flare on an oil production platform is seen alongside an Iranian flag in the Soroush Oilfield off the coast of Iran, July 25, 2005. - REUTERS/Raheb Homavandi/File Photo

TEHRAN, Iran — Dispute remains ongoing over whether parliamentary approval is required for the Iran Petroleum Contract (IPC), a new oil and gas contract model rolled out by the government for upstream projects. Conservative lawmakers want to make further changes to the strategic contract model, arguing that the version approved Aug. 3 by President Hassan Rouhani's Cabinet includes articles that go against Iran's national interest. The IPC is the framework for about 50 upstream oil and gas contracts expected to be signed with foreign investors in coming months

The draft contract, which is aimed at attracting $185 billion in foreign investment in oil and gas production and refining, was first presented to energy investors for feedback last November in Tehran. Since then, the Petroleum Ministry has made 150 changes to it in an attempt to assuage domestic critics. Nevertheless, immediately after the Cabinet’s approval of the IPC, the ultraconservative newspaper Kayhan published an editorial arguing that the amendments only added to the contract’s “disadvantages.” In a separate story published in the same issue, Kayhan implied that both the Joint Comprehensive Plan of Action and the IPC are bad deals that will harm the Iranian economy, thus threatening the national interest.

The conservative news website Alef reported Aug. 14 that a group of 14 lawmakers had sent a letter to Speaker Ali Larijani asking him to put a series of questions to Petroleum Minister Bijan Namdar Zangeneh, a staunch and outspoken supporter of the IPC. The questions mainly focused on, among other things, the need to use local contractors in the production process and the long-term nature, about 20 years, of the contract model's validity, which right-wing parliamentarians believe will weaken Iran’s sovereignty over its oil reserves. Conservatives argue that local contractors will be denied upstream projects as a result of having to compete against multinational giants, and they claim a prolonged presence by foreigners could pave the way for their corralling resources.

Despite calls for parliament’s involvement, the Guardian Council, the body charged with ensuring that approved legislation is compatible with the constitution and Sharia, announced Aug. 20 that it does not have the competence to oversee the Cabinet’s decision. Meanwhile, Larijani has voiced support for the Rouhani administration’s position, dismissing calls for parliament to have a legal say over the IPC.

The broader context is that the Rouhani administration sees the lifting of nuclear-related sanctions as an opportunity that must be immediately seized upon to overcome the isolation of Iran’s energy sector. In this vein, the new contract model — which is said to be similar to the buyback contracts that Iran offered to foreign investors in the past — is seen as an important element in Iran taking advantage of the opportunity presented.

In a recent interview with the Shana News Agency, Gholamreza Manouchehri, the head of engineering and development at the National Iranian Oil Company, tried to assure opponents that his employer would not make a deal that could damage Iran's national interest. “The new model is just a means to attract more foreign investment,” he said, urging groups and individuals not to politicize the case.

“Scaffolding and the construction of pipelines will not be outsourced, and the engineering, procurement, construction and finance [EPCF] contracts will be offered to local companies,” Manouchehri also stated, rejecting complaints that the only available contract would be the IPC model. Further trying to assure those concerned about over-reliance on foreign firms, Manouchehri said, “Foreign companies will solely be involved in technical issues, reservoir engineering and financing affairs.” He also claimed that upstream projects that in the past might run eight to 10 years would be finished in four years under the IPC and at a lower cost.

Mostafa Khoee, the president of Dana Energy’s exploration and production division, views the situation similarly, emphasizing that the government will be offering a basket of contracts, including buyback and EPCF contracts, especially for smaller upstream projects that can be handled by local companies. Only eight local exploration and production companies, however, have so far been authorized by the Petroleum Ministry to team up with multinational giants, another area of concern that ultraconservatives have highlighted as the ministry’s attempt to deliver more projects to insiders.

Opponents cite the low number of authorized companies as a problem and are wary of one company whose top executives have close relations with the Petroleum Ministry. The companies given the go-ahead are the Petropars Group, the National Iranian Oil Engineering & Construction Co., Dana Energy, the Petroiran Development Co., the Mapna Group, the Khatam ul-Anbiya Construction Camp, the Industrial Development and Renovation Organization of Iran, and the Persia Oil & Gas Drilling Co.

Despite the harsh and ongoing criticism, Zangeneh seems determined to use his authority to reject the “unprofessional remarks,” as described by Reza Padidar, a senior oil expert and member of the Tehran Chamber of Commerce. If the dispute continues, however, it could cast a shadow over Iran’s business atmosphere in the post-sanctions era, and that might be why, in an Aug. 15 meeting with Larijani, the oil minister had agreed to further amend the Cabinet-approved version of the IPC. According to the Sedaye Iran website, however, Zangeneh emphasized that the amendments should only be reviewed and confirmed by the parliamentary leadership board, not the rank and file.

In a move to accelerate resolution of the dispute, Zangeneh also agreed to join lawmakers in a closed-door meeting on Aug. 21. According to Zangeneh, as reported by the Aftab News website, he told the legislators that his team had addressed all the criticisms raised by the supreme leader’s office and other supervisory bodies. He noted that the IPC has several major advantages when compared to previous contracts, including that Iran can refuse to pay foreign entities that suspend operations in the case of new sanctions going into force against Iran.

Nonetheless, the media is reporting that some 50 lawmakers continue to campaign against the Petroleum Ministry’s effort to use the IPC, a struggle that seems doomed to fail given the political affinity of a large number of parliamentarians, including the members of the parliamentary leadership board, with the Rouhani administration.