While some have praised Cairo's decision to form a Supreme Council for Investment to be overseen by the president himself, others say that Abdel Fattah al-Sisi's personal involvement only demonstrates institutional incompetence. 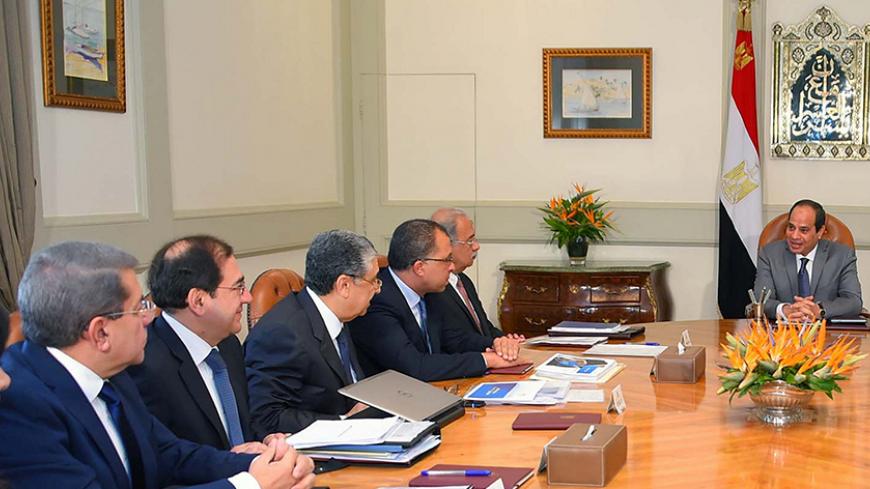 While recent talk of a $12 billion loan from the International Monetary Fund has boosted spirits in Egypt’s economic circles and increased prospects for more investment, attracting foreign capital will require concerted efforts and reform. In this regard, last month Egyptian President Abdel Fattah al-Sisi issued a decree to establish a Supreme Council for Investment. According to the July 3 decree, the council will specialize in supervising the state’s investment policies in all sectors and provinces and will be under the direct supervision of his presidency.

Investment Minister Dalia Khorshid said that once the council is established, it will meet at least once every two months and sessions will be headed by Sisi himself. Khorshid also noted that the council will assure all Egyptians and foreign investors that the investment system will witness a qualitative leap in the upcoming stage.

She explained that the new council will have its specific terms of reference that would not interfere with the prerogatives of other authorities, noting that various authorities will operate in harmony in terms of performance, work and coordination.

A July 25 report on a study by the World Bank, conducted in collaboration with the European Investment Bank and the European Bank for Reconstruction, showed that 50% of companies surveyed in Egypt believe that the political instability is the main obstacle they face, in addition to electricity and funding problems. The report covered 6,000 companies in the Middle East and North Africa, including 1,500 Egyptian companies.

Sharif al-Jabali, one of the most prominent names in the fertilizer business in Egypt, told Al-Monitor he believes the establishment of the council “is a good step,” since it is directly supervised by Sisi while institutions and agencies concerned with investment issues in Egypt are unable to create a suitable climate for investment. However, he said that he has not received any information from the presidency about activating the council, setting prerogatives and mechanisms for the upcoming period or even news about who its members are going to be.

The government agencies concerned with helping investors overcome obstacles in Egypt are the General Authority for Investments and Free Zones headed by the minister of investment, the National Center for Development and Investment Promotion, a Committee of Grievances against the Decisions of the Investment Authority, a ministerial committee to manage investment conflicts and another ministerial committee to manage conflicts in investment contracts, in addition to competent courts for economic conflicts and other investment departments in the administrative judiciary.

Jabali, who heads the Chamber of Chemical Industries and the department of exporters at the Chambers of Commerce Union, expressed his view that only the head of the executive authority can eliminate obstacles and everyone should report to the president. He explained that historically, resorting to the president has always been the solution to every problem facing investment in Egypt, because people are desperate and they no longer believe concerned institutions are competent since they cannot even respond quickly to complaints about the financial sector in Egypt.

Speaking about the most important problems investors face, Jabali said, “We face several problems, such as privatizing and pricing real estate, administrative complexities, the investment law in its current form, procedures for tax assessment, the customs complexities in all its forms, energy saving, bureaucratic procedures to obtain approvals for investment projects and licenses, in addition to the conflict management system.” He also noted that several executive authorities within the state intervene in investment problems, but only the presidency can settle such issues.

Meanwhile, Sheriff Sami, the chairman of the Egyptian Financial Supervisory Authority, told Al-Monitor over the phone that the decision to establish a Supreme Council for Investment headed by the president is proof of the state’s wish to encourage investors and eliminate all obstacles standing in the way of investment. He also explained that the fact the council is directly affiliated with the presidency represents a new phase in the state’s interest in investments and investors as well as illustrates the state’s seriousness in dealing with the issues investors face more efficiently.

Sami added that investment problems are not the responsibility of only one ministry, especially since investors in Egypt mostly face problems resulting from conflicts involving decisions issued by the concerned ministries and the laws governing the process of investment, noting that a council similar to the Supreme Council of Investment headed by the president was established in the 1980s.

Meanwhile, Amr Ismail, a researcher at the Carnegie Middle East Center, sees the presidential decree to establish a Supreme Council for Investment from a different perspective. He believes it has to do with the lack of efficiency within the state administration and the government bodies’ inability to overcome investment problems, in addition to the absence of harmony between authorities. Ismail said that resorting to the president to settle the problems that investors face will change the way the state administration deals with issues in general.

He told Al-Monitor that resorting to the political leadership to resolve conflicts usually happens in countries in which chaos prevails and where institutes are incompetent. He explained that these were not sustainable solutions and they drive institutions toward further incompetence and bureaucracy. Such solutions need to truly decode investment crises in Egypt as structural problems with social and economic dimensions.

He said the investment issues in Egypt are structural problems with social and economic dimensions, and they are linked to the political turmoil in Egypt and in the region, in addition to the drop in oil prices around the world. He noted that while Egypt is not a major oil-exporting country, this drop still has an impact since Egyptians living in oil-rich countries send remittances home and Egypt receives substantial monetary support from Gulf states that rely heavily on oil revenue.

Ismail explained that the bulk of foreign investment flows come from the extractive industries, while the situation has been unstable after the Russian jet crash in the Sinai Peninsula and in light of stagnation in the European Union, which is the largest trading partner for Egypt.