Egypt hopes to lure investors back

The Egyptian government is considering a new law to help ease the obstacles investors face and attract future investments. 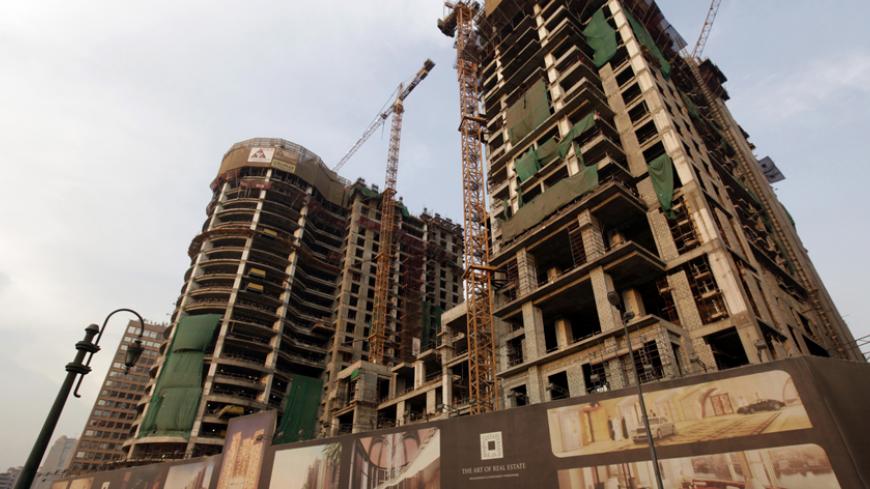 A hotel being built by the Qatari Diar company as part of its investment in Egypt stands near Kornish El Nile in Cairo, Sept. 30, 2012. - REUTERS/Mohamed Abd El Ghany

CAIRO — New proposed legislation aims to make Egypt attractive for investments by eradicating bureaucracy that drains investors’ time and energy while they try to obtain the licenses needed to start their projects. The “investment window” system will ensure this, as it creates a single window through which the investor finalizes all the required conditions to get a license, without having to go to several parties and ministries, as was the case before. An investment committee will represent the investor in all matters and will adopt a mechanism to resolve disputes when they arise. The decision of this committee, as the body in charge of settling conflicts in investment contracts, will be final.

The new law is expected to include several procedures in line with technological progress, setting up a network that links the investment committee, the central bank and other banks. This network will facilitate the credit-query process and the receipt of letters of guarantee in order to save time and eliminate obstacles facing investors in this regard. The Egyptian government is planning to attract direct foreign investment ranging between $8 billion and $10 billion for the 2014-2015 fiscal year, mainly in the oil sector, power stations and the Suez Canal.

Ali Lutfi, the former prime minister and now economics professor at Ain Shams University, told Al-Monitor, “The new law was introduced as the result of obstacles and difficulties that investors have been facing with the current law, which requires investors to go to different ministries and committees that might reach 78 destinations in order to obtain the necessary licenses to launch their projects. After the investment committee emerged, its employees became capable of going to the different ministries, but without having the decision-making power. The investment-window system was created to allow the investment committee to have delegates who make decisions at the ministries.”

Lutfi listed many disadvantages with the old law, among them that it allowed a third party to file a lawsuit to return the ownership of a certain previously privatized company, after an investor bought it and paid large sums of money to restructure and develop it, to the state and win.

Take, for example, the case of the Omar Effendi Company, which was privatized and sold by the state in 2005 to the Saudi Anwal company. A lawsuit was then filed against the sale of the company. A judicial verdict was issued by the Supreme Administrative Court in 2011 to annul the sale contract of the company and return all the company’s branches and assets to the state. Consequently, Egypt faces a major problem, while investors resort to international arbitration.

Lutfi clarified that the state should not stop at merely issuing a law, but should ensure the employees in the investment committee understand it and quickly issue the complementary executive regulation. The ministers involved should also follow up on the law's implementation and any complaints.

The head of the investment committee and former Minister of Industry Ibrahim Fawzi told Al-Monitor, “As per the draft law, a new entity, dubbed the Higher Investment Council, was created to set policies, create plans and implement them and minimize the obstacles facing investment, and the General Investment Committee remained in place. The new council is led by the president of the republic and aims to settle the coordination issues among governmental parties.”

The draft law states that the investor license shall be issued within 30 days from the day all the documents are submitted. Fawzi clarified that the companies and organizations will be exempt from the stamp duty imposed on insurance transactions and credit facilitations for five years, provided that they have partial exemption from the general tax, depending on their activity. They will also be partially exempt from the value-added tax and completely exempt from tariffs on imported machines and tools or be able to regain 5% of the tariffs on all imports.

Fawzi asserted that only the committee will be able to advertise land available for investment through the investment window.

The new law obliges the parties responsible for the land to provide the investment committee with detailed maps specifying all the areas available for investment under their control, in addition to a complete database that includes the dimensions, prices, facilities, code of conduct and other measures. The parties also update the data constantly, and the right of privatization is granted through official approval by the General Investment Committee after the request is submitted to the Higher Investment Council, according to the investor’s briefing of the investment's purpose.

Fawzi noted that certain regulations were included to settle investment litigation. There will be a grievance committee, while the investor will retain the right to resort to arbitration or the judiciary, according to the agreement. The powers of the concerned ministerial committee were also defined as being able to intervene in case of erroneous measures necessitating rectification, all the while ensuring the conditions of the contract are upheld and protecting public funds.

Mohamad al-Qalyoubi, former head of the Textile Industry Chamber and head of the Investors and Exporters Committee, told Al-Monitor, “For Egypt to attract investments, the investment environment should be reformed. This is not restricted to legislating new investment laws but also necessitates revisiting other laws closely related to the investment process, mainly the tax laws, which contain double taxation.”

He said in addition to the government's one-stop shop for investment, a mechanism should be put in place to make it easier for investors to leave the market, whether by declaring bankruptcy, dissolution or dissociation. An investor should not be put in jail for failing to jump through bureaucratic hoops.

Land has not been privatized in four years, but there have been small pieces of land put up for auction. Some industries, like weaving, textiles, iron and steel, need larger spaces than those that have been made available.