Despite once being a victim of discrimination herself, the head of an Egyptian broadcasters' union has forced eight female public employees off the air, demanding they lose weight. 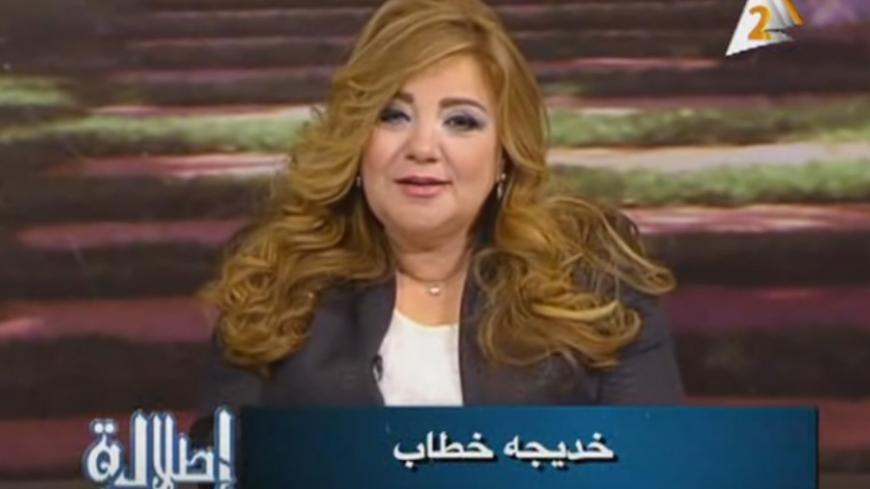 Khadija Khattab, one of the anchors affected by the decision, presents a show on Egypt’s Channel 2. Khattab has struck back against the order in the press, telling local Youm7 newspaper that viewers should judge for themselves whether she deserves to be prevented from working. - YOUTUBE/Khadija Khattab

CAIRO — Safaa Hegazy, the director of the Egyptian Radio and Television Union (ERTU), recently suspended eight female TV presenters. The decision wasn’t based on technical reasons or poor work performance; rather, it was attributed to the women’s weight. Hegazy gave the suspended presenters a deadline of one month to diet and achieve a “decent appearance.”

Hegazy, a former presenter herself, was banned from appearing on the air in 2007 after a decision was issued by ERTU to ban overweight women from reading headline news. She had worked for 17 years as a newsreader for state TV.

The Aug. 9 decision was met by a fierce wave of criticism and condemnation from women’s rights activists. Azza Soliman, the director of the Center for Egyptian Women’s Legal Assistance in Cairo, expressed her shock at the decision. She told Al-Monitor it demonstrates the extent of discrimination faced by women and highlights how they are restricted when society determines their value based on their appearance alone. According to Soliman, this results in women being viewed as commodities.

“We’ve yet to hear about a male presenter being relieved of his job for being overweight,” said Soliman, adding that Egyptian women as a whole are subject to societal oppression by virtue of the fact that their appearance is judged using standards imposed by men. She stressed that men are not subject to such “degradation.”

Soliman said that a proposed Commission for the Prevention of Discrimination could take up such issues. The National Council for Human Rights had suggested such a commission, but the state has taken no steps toward forming one. She stressed that the state’s delay shows a lack of seriousness in the rhetoric espoused by state officials, beginning with President Abdel Fattah al-Sisi himself. Sisi has frequently voiced his interest in promoting women’s rights issues.

Soliman said that society in general — and in particular those who occupy leadership positions in the state — must fully understand the foundations of a state of law and justice in which everyone should be judged on his or her behavior and efficiency. She added that a proper understanding of these foundations would open the door to opportunities that demonstrate women have truly impressive skills and ideas.

Reda Eldanbouki, the director of the Women’s Center for Guidance and Legal Awareness, described the decision as another example of society’s prejudice against women and imposing physical standards that prevent them from doing a job in which competence is the main determinant of success.

Speaking to Al-Monitor, Eldanbouki said the decision violates Article 11 of the Egyptian Constitution, as well as the provisions of the Convention on the Elimination of All Forms of Discrimination Against Women (CEDAW), which Egypt has been a party to since 1981.

He added that the suspended women have the right to file lawsuits in the administrative court to have the decision overturned and charge the ERTU director with discrimination.

Under Article 11 of Egypt’s Constitution, the state must ensure equality between women and men in all civil, political, economic, social and cultural rights. In addition, the article notes the state “shall guarantee women’s right of holding public and senior management offices in the state and their appointment in judicial bodies and authorities without discrimination.”

Meanwhile, CEDAW requires all signatories to take all appropriate measures to eliminate discrimination against women by any person, organization or institution, and to ensure the right of working women to enjoy the same rights as men in terms of pay, promotion and work evaluation.

Eldanbouki of the women's center believes the broadcasters' suspensions reflect a view held by some state officials and many segments of society that women are inferior, recalling former Minister of Culture Abd El-Wahed El-Nabawy’s comments last year to a female ministry employee that he had a problem with “fat employees.” Eldanbouki also noted statements made in 2014 by then-Minister of Local Development Adel Labib, who said he didn’t intend to appoint any women as governors since — in his view — they lacked the necessary qualifications for local administration.

However, Hala Osman, the director of the women’s rights-focused Justice and Support Center, said she does not view the decision as a form of commodification of women. She told Al-Monitor that looking at the order from that angle alone is extreme, and she views the decision as merely indicative of a new administrative direction for the state-run TV focused on appropriate appearance for presenters. She did note, however, that it unfairly impacted women because no male presenters were suspended.

Osman, meanwhile, criticized state TV officials’ interest in the appearance of female presenters without paying any attention to other factors. She said that those who communicate with the public — including TV presenters — should be judged by their personality, performance, presence and — lastly — appearance.

“I would not be satisfied if I saw a female presenter with an ideal body weight and beautiful features, yet lacking in presence and [personality],” said Osman, adding that the most important factor in judging whether or not a presenter is successful is if he or she can engage viewers’ minds and enrich their thoughts.

Osman rejects the idea that a female presenter’s success on the job is tied to her appearance, noting that Oprah Winfrey has remained perhaps the most influential TV presenter in the world for many years, despite the fluctuations in her weight.

Osman stressed that this decision and similar ones that relate to stifling the personal freedoms of state or private-sector employees do not align with rhetoric espoused by the Egyptian administration about society building an improved, modern Egypt. She confirmed her belief that society will not progress if individuals or institutions maintain a negative view of women and discriminate against them.