Considered to be one of the oldest in the world, the Palestinian Scout movement has regained international recognition after being accepted into the World Organization of the Scout Movement. 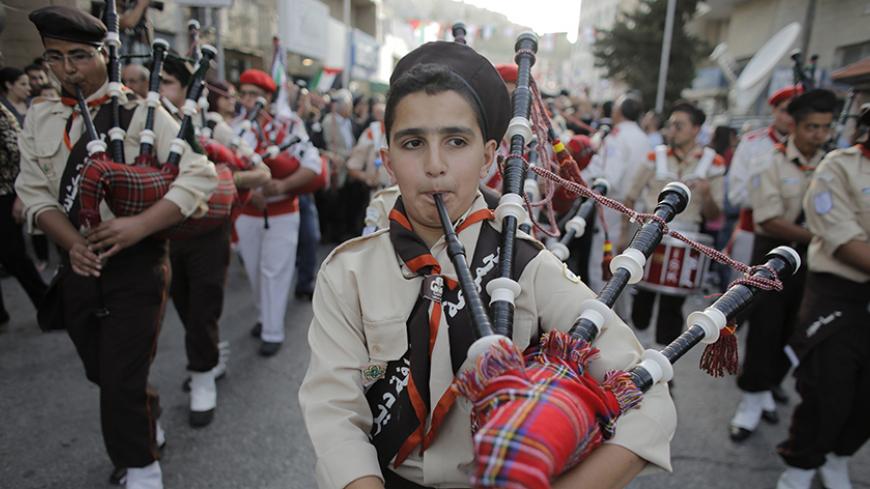 Palestinian Scouts perform during a visit by Maronite Patriarch Bechara Boutros al-Rahi to the West Bank town of Bethlehem, May 27, 2014. - REUTERS/Ammar Awad

RAMALLAH, West Bank — The Scout movement in Palestine has made a strong comeback in the Arab and international arenas, with the Palestinian Scout Association (PSA) joining the World Organization of the Scout Movement (WOSM). A Palestinian Scout team of eight members participated in the first Palestinian-Polish Scout Camp in Poland on July 10, which was part of a cooperation and twinning agreement signed by the PSA and the Polish Scouting and Guiding Association. Moreover, another Palestinian Scout delegation took part in the Arab Scouts meeting in Morocco, which kicked off July 13.

The Palestinian Higher Council for Youth and Sports organized a national week of Palestinian Scouting. The event, which took place across all Palestinian provinces June 19-26, was attended by Atef Abdul-Majeed, the secretary-general of the Arab Scout Organization and director of WOSM’s Arab region. On June 21, a ceremony was held in Ramallah to honor all those who helped Palestine restore its membership to WOSM. This recognition was previously withdrawn in 1948 in the aftermath of the Palestinian Nakba.

Palestine has managed, through the PSA, to earn full membership to the WOSM on Feb. 27. This happened after a three-month online vote in which 162 countries took part, allowing the PSA to be unanimously accepted back into the WOSM after Palestine had been absent for 68 years.

The PSA’s return to the international Scout movement was hailed by Palestinian officials. Palestinian President Mahmoud Abbas and Prime Minister Rami Hamdallah, on June 25 and June 23, respectively, received WOSM regional director Abdul-Majeed and a delegation from the Jordanian and Tunisian Scout associations, whereupon Abbas thanked them for supporting Palestine on the international scene and granted Abdul-Majeed a Palestinian diplomatic passport.

In a speech during the June 21 celebration event held in Ramallah, which Al-Monitor attended, the head of the Palestinian Higher Council for Youth and Sports, Jibril Rajoub, pointed to “an Arab decision to support the Scout movement in Palestine and a strategic plan set by the PSA to establish itself in line with a new socially and geographically inclusive vision. This vision aims to promote a nationalist ideology that reflects the important role the Scout movement plays in the Palestinian national struggle.”

The secretary-general of the PSA, Tawfik Salem, told Al-Monitor, “After joining the international movement, we started receiving many invitations from other countries to participate in Scout and technical camps. This will reflect positively on our presence as well as Palestine’s representation at all international forums.”

According to Salem, the PSA’s membership in the WOSM will grant Palestine, as a sovereign nation, the right to vote on all the decisions adopted by international conferences related to international Scouting movements. It will also grant Palestinian members full rights to take part in the elections for members or heads of specialized international committees, whether as voters or candidates. These committees are tasked with managing WOSM’s programs and activities.

Speaking about the impact of the membership on Palestine and its Scout movement, Salem further said, “The PSA’s membership in WOSM will give young Scouts and guides the opportunity to be part of international activities as well as host international and Arab activities and programs related to Scouting in Palestinian territories. It will also help Palestinians to rally support for their cause among dozens of millions of WOSM members of all age groups, as well as promote Palestinian culture, arts and heritage through the events and exhibitions hosted by WOSM. Furthermore, we will be able to sign twinning and cooperation agreements with other Scout associations around the world. Such agreements will lead to joint activities serving the Palestinian cause.”

Salem further explained that the scope of the new strategy will not be limited to the West Bank, as it aims to restructure the PSA’s bodies and frameworks in the West Bank, including Jerusalem, the Gaza Strip and the PSA-affiliated commissions in Syria and Lebanon.

“Scout regions will be divided into four units: the West Bank unit (which includes 11 commissions), Jerusalem unit, Gaza unit and Lebanon unit, with the exception of the Syrian unit due to the current events. There are now over 120 teams in the West Bank, over 30 teams in the Gaza Strip and 30 in Lebanon. The new structure will focus on reorganizing teams and commissions and enhancing collaboration with school Scouts so that they can take part in external activities and courses, thus ensuring cohesiveness with civil Scout movements,” he added.

As part of the new strategy, the Palestinian Ministry of Public Works and Housing and the Islamic Development Bank signed on June 2 an agreement to fund the construction of the PSA’s office in al-Ram in the Jerusalem district. Scout Commissions across all Palestinian provinces will be provided with offices and financial allocations. According to Salem, “This comes in line with Rajoub’s direction toward building a solid structure that keeps pace with regional and international developments, with a plan to organize permanent Scout camps in all Palestinian cities.”

As for the challenges facing the Palestinian Scout movement, Salem said, “The Israeli occupation is the main obstacle, since Israeli authorities control the Scout members’ trips abroad and may stand in the way of organizing camps in mountainous regions in Area C.”

Considered to be one of the oldest Scout movements in the world, the Palestinian Scouting started with the foundation of the Saint George School Scouts in Jerusalem in 1912. The movement earned international recognition in 1928, which allowed it to take part in the Third World Scout Jamboree held in Arrowe Park near the British town of Birkenhead in 1929, and then in Budapest in 1933. After that, members were persecuted by the British mandate during the Palestinian revolution (the Qassam Revolution) in 1936. In 1948, international recognition was withdrawn following the Nakba.

Palestine’s membership in the WOSM is important given the positive impact it will have on both the national and international levels. It could be an opportunity for the Palestinian Scout movement to restore some of its historical significance. This, however, should not be at the expense of the need for restructuring, reorganizing and institutionalizing the PSA in a way that enables it to fulfill its role.