In hopes of shining a spotlight on Egyptian culture, a group of Egyptian artists has started a new center for children to provide cultural programs and activities unfamiliar to Upper Egypt. 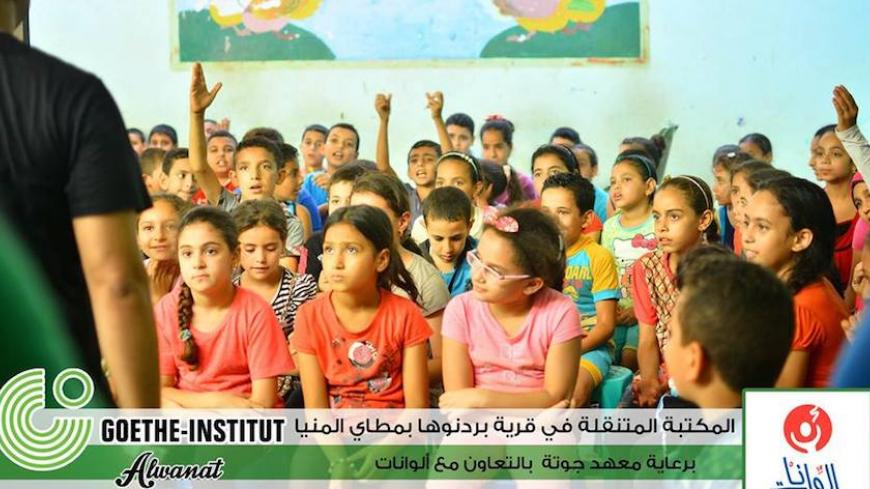 “We dream of breaking down centralization and presenting all kinds of arts in Minya and Upper Egypt. We believe it is possible to achieve our dream here in our own country. We dream of being the reason for the society's change of perception of Upper Egypt. We want society to see how beautiful Upper Egypt is and discover its talents and creative energies.” These are the goals set by a youth group in Minya, which formed a cultural group called Alwanat (Arabic for "colors").

Alwanat seeks to promote all forms of art through initiatives and new and innovative ideas. The group started organizing art activities inside the city of Minya and then moved between the province’s centers, hoping to extend the scope of its activities across all of Upper Egypt’s north and south provinces.

Marco Adel, one of the founders of the group and the current coordinator of the working group, told Al-Monitor, “Alwanat rented a place and turned it into a cultural art center in Minya province. The center was founded by a group of eight young volunteers passionate for art and culture. Alwanat officials seek to promote and spread all forms of art among all members of the society.”

In October 2015, Alwanat organized for the first time a film festival in Upper Egypt for a group of artists, most notably television producer Mohammed al-Adel; May Nour al-Sherif, the daughter of renowned actor Nour al-Sherif; Hamza al-Eili; Rania Shahin; and Father Boutros Daniel, the director of the Catholic Festival.

Meanwhile, the Egyptian Ministry of Culture rarely promotes the arts outside the borders of Cairo and Alexandria, despite the fact that there is a cultural center affiliated with the ministry in each city across Egypt’s provinces. “[We are just happy] the ministry has left us alone, allowing us to work,” said Adel.

“The most prominent activities held in Minya include the organization of a short film festival and other art performances and exhibitions,” Adel added.

He said, “Alwanat’s festival in the villages is one of the most prominent events organized by Alwanat and is held across the villages of Minya. The festival targeted villagers of all ages, whether children, youth, adults, in order to raise cultural and artistic awareness among the marginalized groups. This attracted the children and adults in these villages.”

To advertise and promote Alwanat’s activities, the founders of the group created a Facebook page, which has more than 22,000 likes.

Alwanat also organized concerts for young bands in some centers in Upper Egypt — events that Upper Egypt’s community is not familiar with. These concerts included a performance by al-Sakiaa, which started its tour in the Mallawi region.

The idea of opening a ballet school in Upper Egypt, where society prevents girls from participating in numerous activities, revitalized culture in Upper Egypt by introducing an artistic sport deemed alien to the province’s customs and traditions.

Zidane, who has been working with Alwanat on this project for three months only, said this has been a wonderful and unique experience that contributes to breaking the girls-related taboos created by Upper Egypt’s society. She said the ballet school started with 30 girls and one boy, but this number increased in a short period. After that, the experiment gained wide popularity, bringing the number of children to more than double, reaching 70 participants, and it is still increasing.

Zidane said children must be taught the basics of dealing with each other, mainly how to love each other and work as a team.

She said, “This spirit must be maintained throughout the duration of the training and must be favored over individual work. Practical trainings for ballet shows start at a subsequent stage. Children must have specific skills such as muscle flexibility and elegance in order to go through the training with ease.”

Zidane added, “The school accepts children from 4 to 16 years of age. They are trained in ballet studios in return for a symbolic registration fee for each level. Applicants are selected after being subjected to physical fitness tests conducted by specialists in the field. After passing six basic levels, the students are prepared to become professional ballet dancers by holding live performances.”

Alwanat does not intend to limit its activity at the local level within Egypt. It is trying to become globally renowned.

Adel said, “After the students reach the required level, they will perform ballet shows within the province of Minya as well as in a number of other provinces. We hope that after a period of extensive training by specialists, we will be able to hold international shows.”

Adel, an entrepreneur who graduated from the faculty of law in 2006, said, “Alwanat is trying to make art an important part of everyday life and integrate it in everything around us, including streets. We wish Egypt would be a country of art and culture.”

Adel’s studies and field of work did not prevent him from realizing his dream, which he is already doing. He hopes his dream can grow to cover all of Egypt and go global.

Alwanat created several partnerships, including one with Zawya, Youssef Chahine’s art-house cinema and the German Goethe-Institute in order to promote cultural exchange through the mobile library.

Alwanat organized an activity aimed to teach the various techniques of the art of Arabic calligraphy. It also intends to hold theater and cinema training sessions soon, in an attempt to create artistic opportunities in Upper Egypt.

Adel talked about the beginning of his project, which made the people of Minya sympathize with and even support him. He recalled that in 2014, he and his team, with help from children, drew colorful murals on the walls of the streets.

He explained that this activity aimed to revitalize the visual memory of the people in the province. These people had been subjected to visual pollution for decades, during which time they contented themselves with dull ideas and paintings without any initiative for renewal by officials.