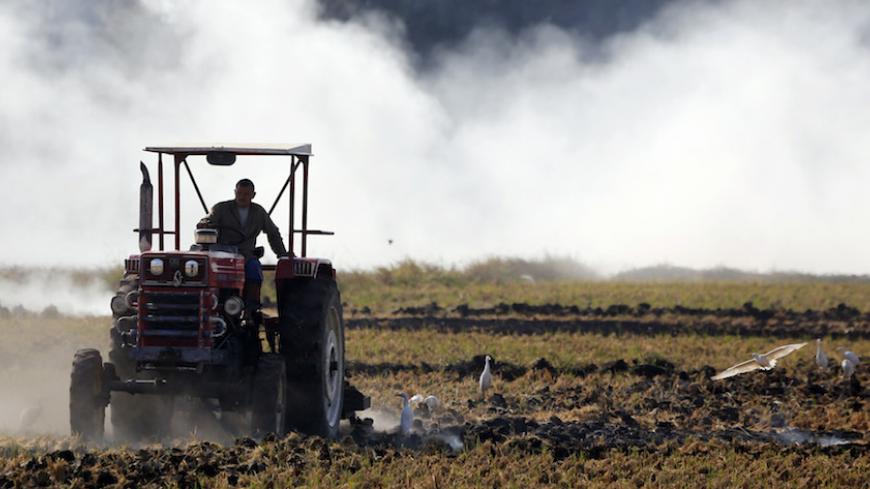 A farmer drives a tractor through smoke from burning rice straw in preparation for the next harvest, at a paddy field at the beginning of the agricultural road leading to Cairo, Nov. 1, 2014. - REUTERS/Amr Abdallah Dalsh

CAIRO — A program that will provide electronic “smart cards” to Egypt’s farmers aims to eliminate administrative corruption within the Ministry of Agriculture, prevent its employees from tampering with paper documents and ensure that subsidies reach the proper recipients.

Agriculture and Land Reclamation Minister Essam Fayed said sometimes intermediaries insert themselves between the ministry and farmers, seeking to exploit the latter and intercept their benefits. In some cases, he said, merchants have been known to represent themselves as farmers so they can import large quantities of flour and receive subsidies.

The Agriculture Ministry will start its pilot program in the governorate of Isma’iliyah, Fayed told Al-Monitor. The Ministries of Finance and Planning are supplying 357.5 million Egyptian pounds ($40.2 million) for the project. The Ministry of Communications and Information Technology will supply technical consulting, and the Military Production Ministry will provide technical support and communications services, including a 24-hour support line.

The electronic cards will store information including a farmer’s name, identification number and agricultural land holdings. This will not only help farmers receive the subsidies they are entitled to, but it will also help to establish a vast database and provide precise information for state agricultural planning and design purposes.

The Military and Agriculture Ministries signed a cooperation protocol June 19 agreeing to the project. This comes in the wake of successive crises to hit the Egyptian agricultural sector and its farmers. Among those are the lack of health insurance or social welfare, black market control of fertilizer supplies and the lack of arable lands at reasonable prices. To these might be added of late the irrigation crisis, which portends harsh conditions in a crucial sector that encompasses 52% of the Egyptian labor force.

Ahmad Abu al-Yazid, the head of the services sector at the Agriculture Ministry, told Al-Monitor that providing a precise national database of all agricultural holdings, as well as enumerating and locating agricultural produce during various seasons, will help decision-makers direct the sector. The database also will facilitate adding farmers to the country’s health insurance project.

It is fairly common in Egypt for farmers to rent plots of land, Abu al-Yazid pointed out. In such instances, all the risks and vagaries of farming fall on the renters. This must be taken into account when the new database is drawn up so that the actual farmers' rights are not neglected and the database keeps in step with existing laws concerning non-ownership of land available for agricultural reclamation.

The state previously adopted a similar program for exchanging food supplies but did not involve the Ministry of Military Production. Abu al-Yazid said that this time, the experience and capabilities of the Ministry of Military Production, "in addition to the gravity and secrecy the figures on agricultural land ownership [have for] national security," led the government to choose the military ministry to run the project instead of the private sector.

Farid Wasil, the head of Egypt’s Farmers Union, told Al-Monitor that electronic information storage helps guarantee farmers’ subsidies and support. “The paper card was an example of this support being squandered at times and not reaching those farmers who were entitled to it,” he said. Now, farmers will have more choices about how and when they use their subsidies and “the freedom to take any kind of fertilizer or seeds whenever they like and without [letting] this support go to waste.”

The card will also benefit the state because the resulting database will keep track of land holdings and the types of cultivated lands, which represents an advancement for Egypt’s agricultural sector.

The state will have to provide training for farmers and employees, Wasil pointed out. The system will cost millions of dollars, and without the training, the system will fail, he said. The cards can’t simply be handed out without first training a cadre of farmers and members of agricultural associations, who need to be assigned beforehand to deal with the cards. The system will require the right tools to tie those associations together and manage them.

Wasil noted that the Agriculture Ministry has agreed to convene an assembly next week to develop administrative procedures for just that purpose.

The cards must serve the purpose for which they were developed, Wasil said, and the ministry will need to help farmers market their produce.

As one example, he said cotton planting this year accounts for only 90,000 acres, compared with 500,000 acres in 2010. He attributed the difference to farmers incurring heavy losses from their inability to market their goods.

The use of modern technology to improve the conditions of the Egyptian farmer is one step on the part of the Egyptian government. Officials hope it’s a sign that help might also be on the way for many other problems that have nothing to do with smart cards, such as farmers’ bank debts and the lack of means for selling their crops.