Is Ennahda following in AKP footsteps?

Similar to the AKP's founders, Tunisia’s Ennahda is now seeking to enter a post-Islamist era. 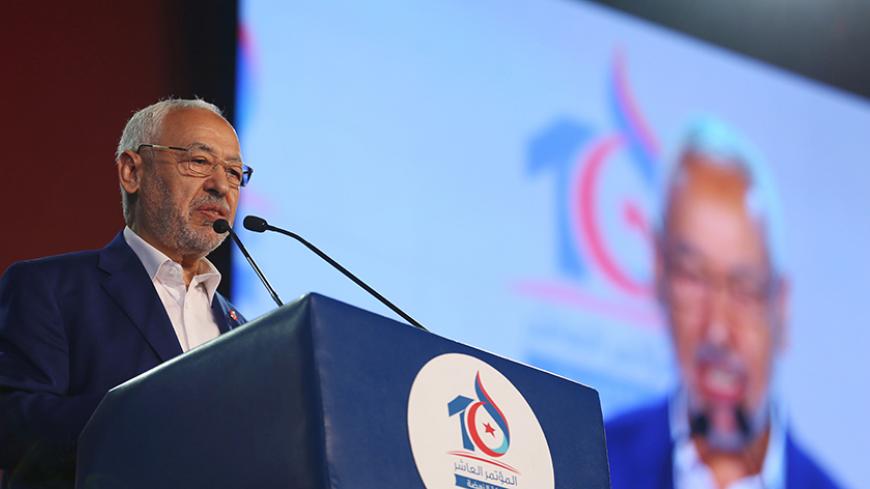 Rachid Ghannouchi, leader of the Islamist Ennahda movement, speaks during the movement's congress in Tunis, Tunisia, May 20, 2016. - REUTERS/ Zoubeir Souissi

It is no secret that in the midst of the ongoing turmoil in the Middle East, Tunisia has emerged as the brightest spot. It is also no secret that Tunisia's success has been made possible in part by the moderate stance of its main Islamist party, Ennahda, which on May 21 at its party congress announced that it was officially abandoning political Islam. The longtime leader of the party, Rachid Ghannouchi, who was re-elected at the event, vowed to “keep religion far from political struggles” and announced that Ennahda would abandon all its religious activities, including preaching in mosques.

Naturally, this news reminded some of the founding of Turkey’s Justice and Development Party (AKP) 15 years ago. At that time, the AKP, which came from an “Islamist” political tradition, had also declared a major change in perspective. Similar to Ennahda’s new self-identification as “Muslim democrats,” the AKP's founders called themselves “conservative democrats.” The term “conservative” in Turkey is often another way of saying “practicing Muslim.” Moreover, Ghannouchi had in the past spoken about the “Turkish experience” and pointed to it as a positive frame of reference.

It is also no secret, however, that the so-called Turkish experience has not been going well lately. The AKP of today, heavily criticized for authoritarianism, is a far cry from the AKP of the early 2000s that was widely praised for its reforms. The common perception of the party, especially its iron-willed leader, Recep Tayyip Erdogan, is that it was “moderate” when weak but turned autocratic after consolidating power. One could therefore argue that if Ennahda is really following in the footsteps of the AKP, it is not a reassuring step.

It appears, however, that Ennahda is not now following in the footsteps of the AKP, and it probably never will. One reason for this is because of structural differences between Tunisia and Turkey. In Turkey, checks and balances on the executive historically were mostly made by the military, which is an illegitimate actor in that capacity in any democracy. Therefore, the AKP pushed the military aside in a process that looked like democratization, but ended up enabling a totally unchecked government. In Tunisia after the 2011 revolution, however, a system of checks and balances was established in the form of the National Dialogue Quartet, which consists of civil society actors and won the 2015 Nobel Peace Prize. Pushing the quartet from the political scene is unfeasible, because such a move would not have legitimacy, which the anti-military actions in Turkey had.

Moreover, there are key differences between Ennahda and the AKP, especially between the men who lead them. Erdogan is famously a patriarchal and assertive politician whose natural instinct is to expand authority and extract obedience. That is why and how he was able to create “one-man rule” within the AKP and a cult of personality as the savior of the nation, a kind of Ataturk II. In contrast, by all accounts Ghannouchi is a modest and temperate scholar who is interested less in accumulating personal power than in making his decades-old theories about “Muslim democracy” work. It is really hard to imagine him turning into an all-dictating ruler, dominating not just politics but media and business as well, as is the case in Turkey.

Furthermore, in its five years of democratic experience, Ennahda has already rung up an impressive accomplishment that the AKP has never seriously tried in the past 15 years: meaningful reconciliation with the more secular forces in society. This was most evident in the constitution-making process, during which Ennahda worked with secular politicians and civil society. As a result, the Tunisian constitution, the most liberal charter the Muslim world has ever produced, was ratified by the parliament in January 2014 in a 200-16 vote.

Back in Turkey, such a constitutional consensus is unthinkable. In fact, the AKP strives for a “new constitution,” but it hopes to introduce it by maximizing its own seats in the parliament and mainly for the sake of implementing the presidential system that Erdogan dearly wants. In other words, whereas Ennahda supported a truly Tunisian constitution through consensus, the AKP seeks an “AKP constitution” through triumphalism.

All this suggests that one could be more optimistic about Tunisia’s democratic future and Ennahda’s contribution to it than the case of Turkey and the AKP. Of course, Tunisia faces many challenges, among them a weak economy and Salafi jihadis. It also remains to be seen whether Ghannouchi’s progressivism will be fully internalized by Ennahda or whether there will be a conservative resistance, which some observers, including Shadi Hamid, view as a distinct possibility.

Still, at least at this point, Ennahda’s post-Islamism seems to be a better story than that of the AKP. One should resist thinking of the two parties as the same phenomenon, and in fact, Ennahda should avoid identifying with the Turkish model.