Mounting criticism over mistreatment of horses could end the carriage trade on Buyukada, a picturesque island near Istanbul that remains off limits to motor vehicles. 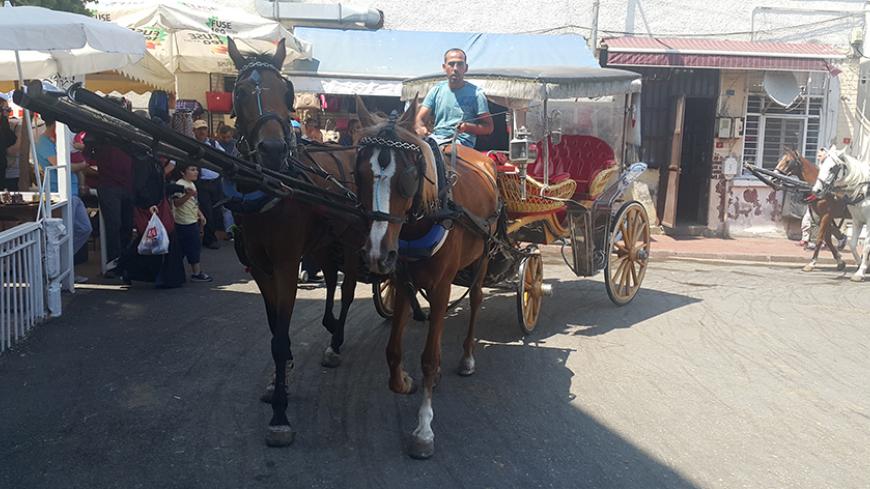 A coachman directs his carriage on Buyukada, one of the Princes' Islands off Istanbul, June 5, 2016. - Sibel Hurtas

ISTANBUL — Lying off Istanbul’s Asian shore is the picturesque island of Buyukada, the largest of the nine Princes’ Islands and a rare oasis of tranquility in the bustling city. A Macedonian king is said to have buried treasure there and Byzantine empresses were exiled on Buyukada. In more recent times, it was a flashpoint in the 1955 pogrom against Istanbul’s Greek and Armenian minorities that forced thousands to emigrate. The mansions the emigrants left behind are today motels and pensions, attracting both local and foreign tourists, especially Arabs in recent days. Nestled on the island’s highest point is the ancient Agia Yorgi Church and Monastery, overlooking a coastline dotted with fish restaurants and ice-cream parlors. A favorite destination for day trips, Buyukada offers some of the few natural beaches that remain good for swimming in Istanbul today.

The island’s most enduring hallmark, however, is the ban on motor vehicles, which means that both locals and visitors rely on bicycles and horse-drawn carriages to move around the island's little more than 5 square kilometers (3 square miles). The colorful coaches, decorated with beads and bells, are perhaps the island’s most recognizable fixtures.

Yet, this environment-friendly, idyllic facade obscures a world of torment for the horses. In what has become almost routine, the arrival of the summer season is accompanied by animal rights campaigns. The latest one, launched on the petition site Change.org, denounces the "season of death" for horses.

For campaigner Gokcen Kilinc, the treatment of the horses amounts to cruelty that must be stopped. She claims the horses are deprived of adequate drinking water to keep them from urinating frequently, and their harness sores are left untreated. Others claim that crippled or sick horses are abandoned. Kilinc points to an incident in which a mare died following two days of agony after giving birth. Alleged footage of the incident was posted to YouTube by an animal rights group. Other videos show a horse fainting from exhaustion and another left to die.

On a recent trip to the island, the first thing that caught this reporter’s eye was the diminished number of tourists. At the phaeton stand, small groups of clients arrived in intervals of about five minutes, while empty carriages were parked in a line, their decorations removed. The horses were visibly skinny, frail and unkempt. They were said to be former racehorses, bought after retirement for about 3,000-4,000 Turkish lira ($1,000-$1,370) each.

Ismail Adnan Karsan, the deputy chair of the island’s Phaeton Operators Chamber, sat at the stand, watching over the carriages. He said a total of 226 carriages and 1,100 horses worked on the island, mostly on weekends. The horses are cared for by the coachmen and a private veterinarian, he said, noting that the island had a special horse cemetery. According to Karsan, the local agricultural department and municipal authorities provide no veterinary support, and the Istanbul Metropolitan Municipality is uninvolved.

What about the alleged mistreatment? Karsan flatly denied the claims. “Without the horses, we can’t earn our bread,” he said. “What lies beneath those claims [are attempts] to bring motor vehicles to the island and destroy its natural fabric.”

The coachmen are mostly Kurds from southeast Turkey. Mustafa Atilgan, a native of Van, told Al-Monitor how he came to Istanbul as a construction worker before becoming a coachman more than three decades ago. “If you fail to take good care of the horse, it will keep working for 20 days, but not 21. I look after the horse more than I look after myself. I’m obliged to do so to earn my bread,” he said.

Not all coachmen are as fortunate as Atilgan, who leads a relatively stable life after 35 years in the business. Many have come as seasonal workers and stay either in the stables or in makeshift shacks. The earnings of the coachmen vary widely, according to Atilgan. “One day you earn 100 lira [$34], another day it hardly pays for itself,” he said.

Our relatively short carriage tour started slowly and then gathered speed. The horse seemed to tire after a while. At an uphill patch of asphalt road, the coachman’s whip began to crack, marking the end of the trip for us.

Enjoying the pleasant weather in an outdoor cafe, island native Ani Beyleroglu said she avoided the phaetons because of the poor condition of the horses and used a bicycle instead. “A few days ago, a horse struggling to pull the coach collapsed abruptly just outside my house. It was already dead when the coachman got off to check it out,” she told Al-Monitor. Her friend Lizet Navon was also critical. “Those people live off the horses but fail to take care of them. Every time I step out of my house, I find myself shouting at a coachman to stop whipping his horse.”

Still, both women are against ending the carriage business, wary that it would mean the arrival of motor vehicles, which they see as a major stepping-stone toward an unwelcome construction drive that will destroy the island’s idyllic environment.

In Buyukada’s case, the criticism of islanders and activists indicates an urgent need to improve the horses' care and living conditions. There is nothing to stop the authorities from taking control and stamping out the mistreatment. Such supervision and protection measures are also crucial to preserving the island’s unique beauty.