Minor blast in Beirut bank will have major repercussions

The bombing of the BLOM Bank in Beirut could have repercussions for Lebanon’s banking, financial, economic, political and security stability. 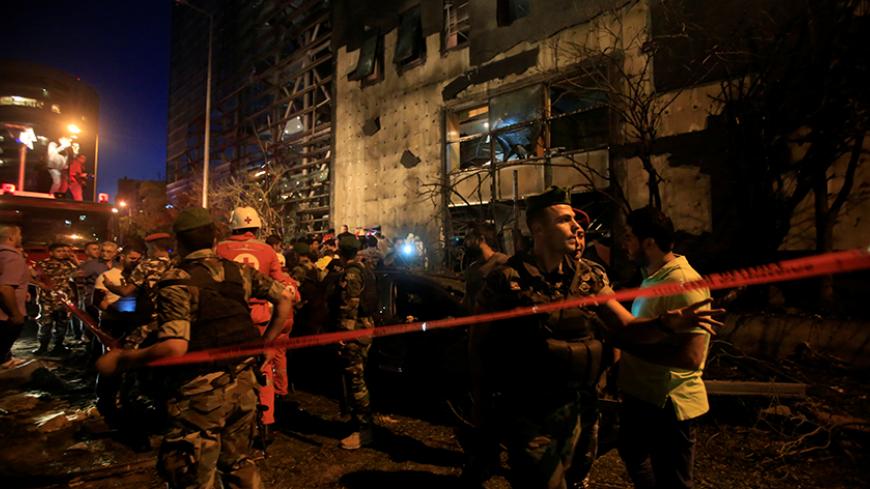 Lebanese soldiers secure the site of an explosion at BLOM Bank in Beirut, June 12, 2016. - REUTERS/Jamal Saidi

The bomb that exploded June 12 at the BLOM Bank on Verdun Street in central Beirut did not cause major material damage and only slightly injured two people. Its political and security repercussions, however, will be major. The bomb exploded at the headquarters of one of Lebanon's leading banks, and it took place against a backdrop of heightened tensions between Hezbollah and Lebanese banking and financial authorities stemming from implementation of the Hezbollah International Financing Prevention Act of 2015 (HIFPA), a US law calling for sanctions against anyone found to be financially supporting or doing business with Hezbollah, which the United States has designated a terrorist organization.

After the release of regulations for implementing HIFPA on April 15, the issue sparked conflict in Beirut. Hezbollah Secretary-General Hassan Nasrallah repeatedly referenced it in his speeches, assessing its consequences and warning Lebanese authorities about its repercussions. The Central Bank of Lebanon and the Association of Lebanese Banks took the position that Lebanon is obliged to apply HIFPA and cannot afford the risk of manipulation to skirt the law, under penalty of Lebanese banks facing US sanctions, which could lead to their closure.

One of the participants in those meetings told Al-Monitor on condition of anonymity that the consultations failed to produce positive, conclusive results, as the Hezbollah delegation adamantly claimed that Lebanese citizens’ banking rights are a sovereign matter and that Lebanon, as an independent state, cannot take these rights lightly or compromise them in this regard.

In addition, Hezbollah claimed to have documented information showing some Lebanese banks to be going beyond the measures required by the Americans and closing accounts belonging to people whose names were not included on a list issued by the Department of the Treasury’s Office of Foreign Assets Control (OFAC) as being covered by HIFPA. The banks were also said to be closing accounts without alerting the Central Bank, which is supposed to ensure that the provisions of HIFPA actually apply to targeted accounts.

The source said that the Lebanese bank representatives told the Hezbollah delegation that whenever a financial-security situation might lead to Washington getting involved, the banks tend to apply the law in a strict manner to avoid unintentional dereliction. Previous experience — specifically with the Lebanese Canadian Bank, which was liquidated after accusations of money laundering involving individuals close to Hezbollah — has taught the Lebanese banks that strictness is a guarantee against inadvertent consequence when insufficient measures are taken.

The bank delegation claimed that its measures are in line with the OFAC list and the requirements of correspondent banks in the West. The Lebanese banks deal with one or several foreign correspondent banks and have a portion of their assets deposited there. This forces Lebanese banks to apply the protection measures taken by the foreign banks, including the HIFPA provisions, and makes them liable for the consequences of not doing so. This, according to the banks, explains the measures they are taking.

Amid this back and forth between Hezbollah and the banks, Salameh said in a June 8 interview with the CNBC network that “100 Hezbollah-related accounts had already been frozen.” He added, “We don't want illegal funds in our system. We don't want a few Lebanese to spoil the image of the country or the financial markets in Lebanon.”

Salameh’s statements were deemed critical of Hezbollah’s position and its supporters. Hezbollah's parliamentary bloc, Loyalty to the Resistance, replied the same day in a statement, declaring, “Targeting the resistance and its public through the banking sector is doomed to fail and will not achieve its objectives.” It went on to say, “The recent position of the Central Bank governor was ambiguous and suspicious, which shows that the monetary policy is not ruled by the national sovereignty controls. Therefore, we reject it altogether. Everyone should be aware that the resistance’s public as well as its educational and health institutions will resist any attempts to undermine them no matter who the parties behind these attempts are and how important they are.”

The conflicting positions of the two sides thus went public, and 72 hours later a bomb exploded in a bank in the center of Beirut. Two theories immediately began circulating in the media and among Lebanese. According to Hezbollah opponents, the blast was a violent message from the Shiite organization to Lebanese banking, financing and governmental authorities to stop cooperating with United States in applying HIFPA. Meanwhile, friends of Hezbollah said the bombing had been carried out by a third party to implicate Hezbollah and incite people against it locally and abroad.

The circumstances surrounding the bombing can be assessed to the benefit of both theories. The blast took place on a Sunday, when banks are usually closed, and at 8 p.m., when the blast area would be devoid of passers-by due to the Ramadan iftar meal. The timing limited the potential damage and suggests that the blast was only meant to convey a message.

Hezbollah has remained silent about the incident, while political circles close to it have said the party is awaiting various reactions to the event before issuing a substantive reply. In any case, regardless of who was behind the blast, the episode will certainly have repercussions on Lebanon’s banking, financial, economic, political and security stability. In other words, it is a minor blast that will have major repercussions.