Iran forges ahead with Atlantic ambitions

Iran moves forward with its plans to establish a naval presence in the Atlantic Ocean, announcing progress in the construction of new frigates. 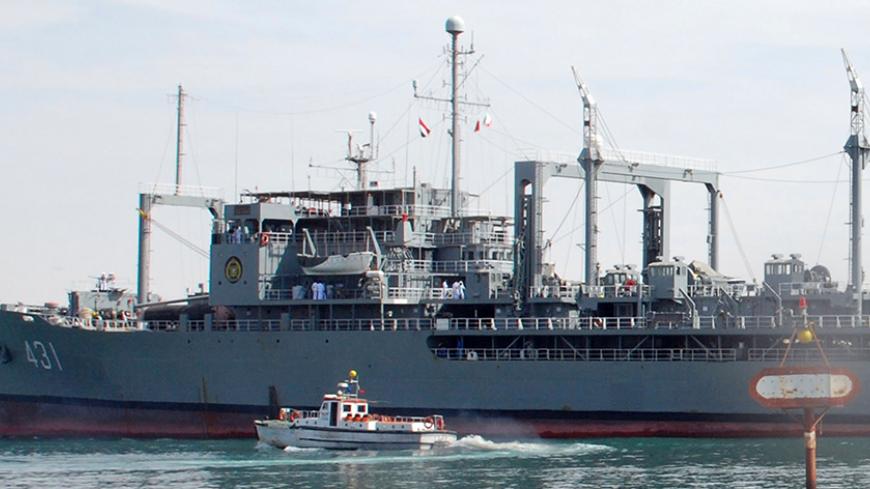 A coast guard boat travels past an Iranian naval ship in the Suez Canal, north of Cairo, Feb. 22, 2011. - REUTERS/Stringer

TEHRAN, Iran — Iranian Navy commander Rear Adm. Habibollah Sayyari announced June 14 that Iran is planning to establish a naval presence in the Atlantic Ocean. In conjunction with this statement, he said, “We have yet to determine which country will assist us regarding the presence of our naval fleet. When the name of the chosen country is confirmed and announced, our strategic naval forces will deploy a training and military flotilla to the Atlantic Ocean.”

Sayyari also made announcements about new developments related to the “Mowj” (“Wave”) project, saying that Mowj frigates 3 and 4 have yet to be named but are 80% complete in terms of their construction, and thus in operation. His most important announcement, however, was about the fifth frigate in this series, which according to Sayyari is 90% complete. This vessel, which is slated to be launched in 2017, has been named Sahand. According to Sayyari, the Sahand, which is the latest type of Iranian-made frigate, has 30% greater stealth capabilities compared to earlier models and is equipped with newer weapons.

Although Sayyari did not specify the type of weapons that are to be placed on it, it is likely that this frigate will be equipped with the “Valfajr” torpedo system, surface-to-surface missiles with a greater range as well as close-in defense systems such as the Phalanx and Kashtan 3-M. Of note, an Iraqi Osa-class vessel came into Iran’s possession during the 1980-88 Iran-Iraq War, and Iran has ever since unsuccessfully tried to reverse-engineer its close-in defense system.

First, the Iranian naval fleet is inefficient. When discussing the Iranian navy and its possible presence in the Atlantic Ocean, one can obviously not compare this with the presence of strong naval fleets such as that of Russia, China or Britain. For the most part, Iran’s navy is made up of older combat and logistics ships, haulers as well as old tankers that were purchased during the reign of the shah. These vessels are designed based on the Italian and British warship platforms of the 1950s and 1960s.

Of course, there have been some modernization efforts to the extent possible with the resources available inside the country. However, compared to the modern naval fleets of Western countries, Iran still lacks combat capabilities. The most important points of weakness in Iran’s current fleet include lack of stealth capabilities, lack of vertical missile launch technology — which greatly reduces the number of rockets fired — as well as lack of efficient carrier defense systems, with 23 mm autocannons and standard missiles (Sayyad 2) mainly in use. Other weaknesses include the extent of worn-out engines and bodies in addition to the relatively low quality of the technology used in electronic and missile combat systems.

Second, there is the lack of potential host countries. Though Iran has friends in South America, it has thus far been unable to find a host country for a potential presence in the Atlantic Ocean. It appears, however, that the problem is about to be solved. In this vein, countries such as Venezuela and Cuba would be likely hosts.

In spite of these difficulties, however, Iran is likely to deploy a flotilla to the Atlantic Ocean. It has already deployed ships to the South China Sea, the Bab-el-Mandeb Strait, the Gulf of Aden, the Indian Ocean, the Mediterranean Sea, the Suez Canal and the Strait of Malacca.

To be clear, aspects related to psychological warfare are more important than the military aspect of the planned Atlantic Ocean deployment. Iran’s limited fleet is incapable of facing possible threats of much stronger naval fleets. However, the presence of a middle power such as Iran in the Atlantic Ocean could have a major psychological impact on its rivals, especially the United States. It thus appears that Iran, just as is the case with its missile program, is trying to use its navy to achieve the goals of its broader gunboat diplomacy. In other words, rather than passively seeking to decrease tension caused by the presence of foreign fleets in the Persian Gulf, it is trying to kick the ball in the other side’s court through these kinds of measures.

As soon as Iran further enters critical regions such as the eastern Mediterranean, the Suez Canal, the Gulf of Aden, the South China Sea and, in the future, the Atlantic Ocean, the media and politicians will start paying attention. This attention could in turn lessen the pressure caused by temporary tensions between Iranian and other fleets in the Persian Gulf and the Strait of Hormuz. Of note, Iran is also trying to increase its combat experience by conducting joint naval exercises with countries such as India, Pakistan, Russia and China. Of course, at home, Iran’s navy has to deal with expanding threats from rivals such as Saudi Arabia, the United Arab Emirates and Israel.

Lastly, Iran has an inherent desire to behave like a grand power — a desire that has its roots in the country’s long history. In spite of four decades of restrictions on procuring equipment, Iran’s navy has so far been deployed on important missions. It is not clear yet whether the removal of the UN arms embargo under the Joint Comprehensive Plan of Action by 2020 — and the possibility of Iran receiving newer and larger ships and submarines from its allies — will increase the number of such missions.

What is clear, however, is that Iran has an ambitious plan to expand its naval fleet to play a key role in all parts of the world. In this vein, Iran’s policy of designing and manufacturing heavy nuclear submarines and advanced destroyers, as well as development of surface-to-surface missiles and naval ports, shows that the country is aiming to become a naval power in the future — just as has been put forth as a goal of Iran’s defense programs by Supreme Leader Ayatollah Ali Khamenei.