Though Iran has made use of the lifting of nuclear-related sanctions to boost ties with India, deepening trade with New Delhi is only part of its vision for such cooperation. 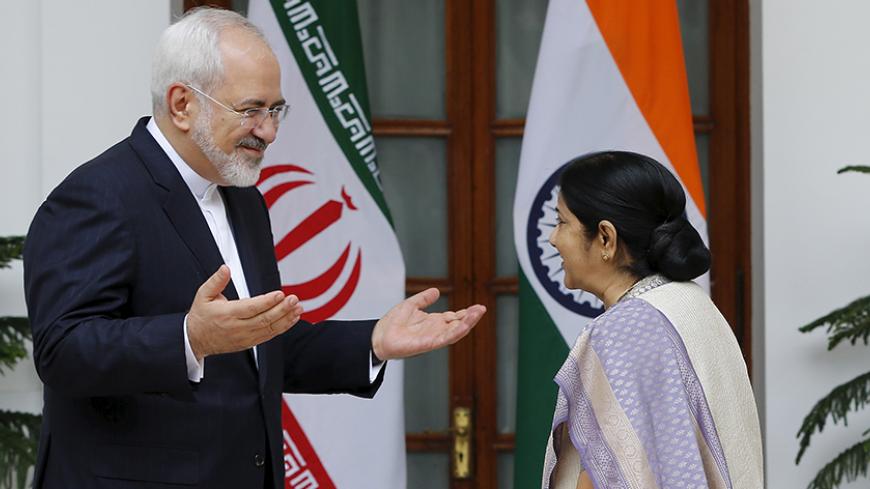 TEHRAN, Iran — Among the many delegations that have visited Iran since the Jan. 16 lifting of nuclear-related sanctions, India has been among the few that have managed to actually secure a major economic deal with the Islamic Republic.

Indian Prime Minister Narendra Modi signed 12 agreements, including a deal to develop Chabahar — a port city on the Gulf of Oman — shortly after he paid an official visit to Iran in late May. India committed to immediately invest about $500 million in the Iranian free trade zone, while it also vowed to spend an additional $20 billion to develop the port city with roads and railroads running inland to the north.

Expressing satisfaction with the agreement, Iranian President Hassan Rouhani called it a “political and regional” deal that could connect India through a “reliable route” to landlocked Afghanistan and Central Asia.

Iran sees Chabahar as an opportunity to diversify its trade partners, as it practices a macroeconomic policy strongly supported by Supreme Leader Ayatollah Ali Khamenei, who gives preference to Eastern partners who act rather “independently” when it comes to the United States' Iran policy.

During a meeting with Modi on May 23, Khamenei expressed satisfaction with the Indian government’s policy “not to join Western and American coalitions to the so-called campaign of the war on terror.” He added that the Islamic Republic welcomes further cooperation with India, which is one of the emerging economies in the world, adding that Tehran has been serious in implementing its bilateral agreements with New Delhi.

The supreme leader’s approval of the agreement could be why the Indian premier succeeded in inking such a key deal in Tehran very quickly, though some pundits argue that Tehran is now seeking to use its deal with India as a motive to encourage other regional nations — namely Pakistan and China — to get involved in the Chabahar project. New Delhi has been sitting on the project since 2003, but an Iranian official recently unveiled that Tehran first asked rival Pakistan to help develop the port city.

Sanctions on Iran had posed a big obstacle, but now that they are gone New Delhi can push ahead, outflanking Pakistan and challenging Chinese dominance in the region. Iran is the “only way” for India to access Central Asia and Russia, India’s key regional partners, Quartz India reported May 24, citing Christine Fair, an associate professor at Georgetown University. Fair also noted that “India has significant hydrocarbon needs and Iran will remain an important source,” an issue also pointed out by Khamenei in his meeting with Modi.

Chabahar port is being developed to facilitate trade between the two countries, but the deal will definitely also have political benefits for both sides. The Islamic Republic seeks to foster its ties with Eastern nations to avoid external pressures such as the US-led nuclear-related sanctions in the future. In this vein, the two sides also agreed to cooperate on terrorism and consult each other on regional stability, according to a report published May 24 by Times of India. Khamenei’s official website said that in his meeting with the supreme leader, the Indian prime minister criticized certain countries for dividing terrorism into “good” and “bad” and accused them of “paying lip service” in their campaign against terror.

Despite Iran’s endeavor to get closer to India, which also has close ties with the United States, Tehran does not seem to be willing to sacrifice its long-term relationship with Pakistan and China to an economic project with India. What both the conservatives and incumbent moderates in Tehran are looking for is to create an economic hub with the support of India, China and Pakistan. A source who has close ties with the conservative Islamic Coalition Party told Al-Monitor that top conservative leaders already backed the idea to turn the country into a hub for trading with Central Asian markets. “This is a definite plan. The government must take an approach to make it happen,” he said. And without Pakistani and Chinese support, Iran will fail to achieve this strategic goal.

What the Iranian government is trying to do is find common interests among regional rivals. India’s relationship with Iran could be boosted in the upcoming decade, as Rouhani said that their relationship “starts with Chabahar today, but its end will be an all-out comprehensive development, economic and cultural cooperation.” However, closer ties with India do not mean that Iran will stop negotiating with regional countries to absorb further investment in Chabahar. India is only developing a couple of container terminals at the port itself, and Tehran is still trying to engage other countries for its development.

Iran’s ambassador to Islamabad, Mehdi Honardoust, gave a signal to Pakistani officials within a week after Modi’s visit that his country welcomes Pakistan’s engagement in Chabahar. Citing the Iranian diplomat, the Indian news website Scroll said that Tehran first offered Chabahar to Pakistan and China, but that they were not interested. Honardoust met with officials at Pakistani think tanks and tried to persuade them that Chabahar “is not a rival” to Pakistan’s Gwadar port. He said Iran’s offer is still open to “Pakistan, our brotherly neighbor, and China, a great partner of the Iranians and a good friend of Pakistan” to help develop Chabahar facilities.

Given the close ties Tehran already has with Beijing and Islamabad, Tehran will sooner or later be able to engage China and Pakistan for the development of the Chabahar port — the type of cooperation that would get Iran closer to its ambition of becoming an influential trade hub in the region.