How media blackout on Hebron shooter trial will undermine IDF

Following threats against the commander of the soldier who shot a Palestinian assailant on the ground in Hebron, the prosecution has asked that future witnesses testify behind closed doors and that the press not reveal their names. 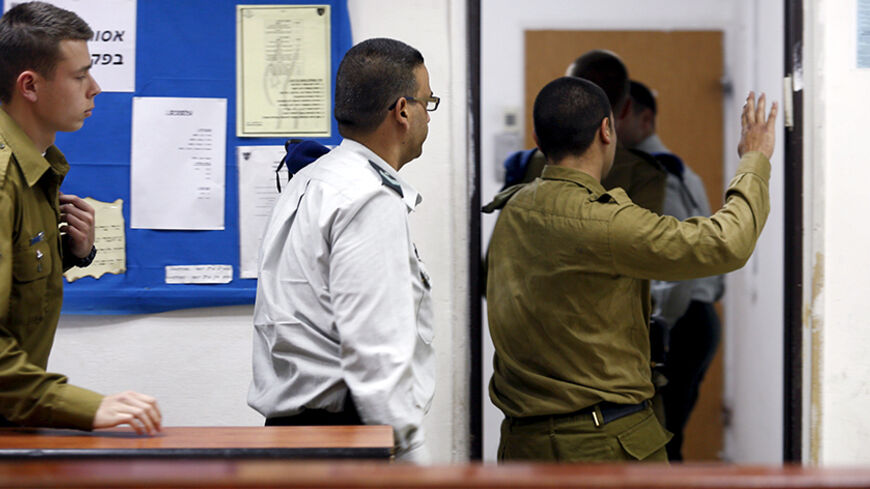 Elor Azaria, an Israeli soldier (R), walks out of a military court during a break at a remand hearing for his case, near the southern Israeli city of Kiryat Malachi, March 31, 2016. - REUTERS/Amir Cohen

The military prosecutor’s unusual request to impose a blackout on the names of witnesses in the trial of Elor Azaria, who shot a Palestinian assailant on the ground on March 24, sends a pathetic message of weakness and surrender in the face of growing extremism in Israeli society and the spread of crassness in the public discourse.

The request was submitted June 20 following a flurry of verbal assaults and threats over social media targeting Azaria’s commanding officer in the Israel Defense Forces, Maj. Tom Neeman. The highly regarded officer testified at the trial of Azaria, who is accused of killing a “neutralized” attacker in Hebron. In his testimony, Neeman said that Azaria shot the man without his permission and without any operational motive, and later told him, “The terrorist was alive and needed to die.”

After giving his testimony, Neeman was flooded with hundreds of angry responses by Azaria’s followers on the social networks. In this flurry of incitement and verbal violence, Neeman was called a “traitor” and a “disgrace to the IDF.” He even received personal threats by phone.

Rapper Yoav Eliasi, better known as “The Shadow,” is a Facebook phenomenon with 240,000 followers. He posted, “Today, the company commander of the fighter from Hebron testified against him. This was the final proof that everything we knew about the IDF of yesteryear — the camaraderie among its fighters, officers leading the charge and jumping on the grenade before it goes off — all gets tossed in the garbage when you have to protect your own ass and worry about your own promotion. What kind of soldier would follow his commander into battle, knowing that he won’t back him up a million percent?! I find it sad, and it hurts me to write this.”

Neeman received no credit for having fought in some of the fiercest battles of the Second Lebanon War, Operation Cast Lead and Operation Protective Edge. In the wild, topsy-turvy world of the Hebron shooter’s supporters, Neeman is the villain.

After a turbulent weekend, Neeman finally lodged a formal complaint with the police about the threats. The military prosecution held an emergency consultation and decided to request that the military court impose a protection order for future witnesses to ensure their safety and encourage them to testify freely.

What this means is that the media will be banned from publishing the names and photos of witnesses for the prosecution. Ostensibly, this is a good solution, intended to protect soldiers and officers alike from internet shaming, if not worse. It will also prevent those witnesses from failing to testify out of fear that they or their families might be harmed.

The problem is that the prosecutor behind this request was apparently only concerned with the current legal process and his chances of winning in court. He ignored the long-term significance his request would have on the moral values and ethical code of the IDF’s combatants.

With this request, the military prosecutors are causing enormous damage to efforts to keep the IDF out of politics and vociferous public debate. They are raising a white flag before “The Shadow” and his ilk, the hooligans of the far right. This request is a form of surrender to politicians like Prime Minister Benjamin Netanyahu and Defense Minister Avigdor Liberman, both of whom have backed Azaria. Realizing that public sentiment lay with the shooter, Netanyahu called Azaria’s father a week after the March 24 incident, while Liberman, then a member of the opposition, appeared in court during an early hearing in a show of support. While it is true that Liberman adopted a different approach once he was appointed minister of defense and decided to back Neeman instead, it is not at all certain that his shift will help any to calm the strident public debate surrounding this case.

At this point, Azaria’s trial must not be seen only through the prism of a criminal case, in which he will be either convicted or acquitted. It should be seen as a battle over the IDF’s image and the image of Israeli society at large, as well as over the need to keep the army out of the political arena. That is why this trial should be covered freely. The prosecution’s witnesses must know that there is no reason for them to feel ashamed or to hide. They will be defended as long as they act morally and ethically, just like they were taught by the IDF.

It is incumbent on the military justices in Jaffa to retain their composure and consider concerns that extend beyond this one criminal case. They must reject the prosecution’s request out of hand and restore the witnesses’ confidence by backing their actions. Azaria’s trial should be a show trial in a positive sense of the term. It must be the kind of trial that reinforces the IDF’s reputation as the people’s army and an ethical army, rather than some toy to be manipulated by politicians and an unruly mob. This is a fight over the red lines we set for ourselves as a society.

In this sense, Azaria’s trial will also have enormous importance in the battle over the country’s values. Furthermore, the judges could decide that there were expedient circumstances behind his decision to shoot and kill a neutralized attacker. But if the court accepts the prosecution’s request and the important testimonies are delivered behind closed doors, the court will be betraying its own role in the process and contribute to further blurring the boundaries between what is moral and what is political.