The leaders of the two largest democracies in the world were holding a working lunch at the White House, but most of the questions at the White House press briefing June 7 were about who will succeed Obama in the Oval Office. 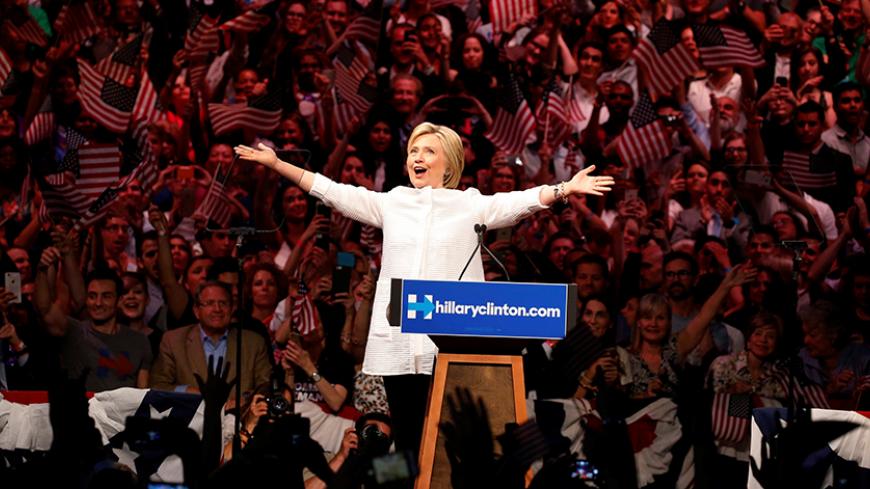 Washington — The leaders of the two largest democracies of the world, US President Barack Obama and Indian Prime Minister Narendra Modi, were holding a working lunch in the White House Cabinet room. But as former Secretary of State Hillary Clinton closed in on the Democratic nomination over Vermont Sen. Bernie Sanders on June 7 and congressional Republicans distanced themselves from Donald Trump’s charges that a judge overseeing a fraud investigation of Trump University is biased because of his Mexican heritage, most of the questions at the White House press briefing were about the campaign over who will succeed Obama in the Oval Office.

“Is the president ready to endorse Secretary Clinton now that she seems to have enough delegates to secure the nomination?” a reporter asked White House spokesman Josh Earnest.

“At this point, there is at least one superdelegate — the one who works in the Oval Office — who’s not prepared to make a public declaration about his endorsement at this point,” Earnest answered. “But stay tuned, and we’ll keep you updated.”

“Does the president agree that time is ticking here, that there needs to be unity soon?” another reporter asked, noting House Democratic leader Nancy Pelosi had called for Democrats to unify behind the leading candidate that morning.

“Well, look, I think the president’s view is that we are nearing the end of the nomination process and that Democrats all across the country had an opportunity to weigh in on the decision about who should represent the Democratic Party in the general election,” Earnest answered. “And as the process winds down, it will be important for the Democratic Party to come together in support of the party’s nominee.”

“Does the president see himself as a unifier?” the reporter asked.

“When you take a look at some of the public opinion data about the president’s standing in the Democratic Party, he certainly would be well-positioned to play that role,” Earnest replied.

“Now that Hillary Clinton does have that magic number of delegates and she’s being called the presumptive nominee, is that how the White House is viewing the situation now?” another reporter asked Earnest.

By Al-Monitor’s count, there were roughly 25 questions in the press briefing related to the US presidential campaign and Democratic primary, 10 on India and two on Syria. A word search of the White House press briefing transcript for June 7 showed “campaign” mentioned 24 times, “Clinton” mentioned 12 times, “Trump” mentioned nine times, “Sanders” five times, “primary” nine times, “India” 59 times, and “superdelegate” 16 times. The “economy” got 14 mentions, “nuclear” 13, "Iran" 7, "Syria" 7, Stanford 2 and House Speaker Paul Ryan — who had that morning called Trump’s comments on the judge overseeing the Trump University fraud case “the textbook definition of racist” — one. There was one question about when the “28 pages” of the 9/11 commission findings might be declassified, and two questions about what Obama and Modi had for lunch. (The dessert looked like something related to strawberry shortcake, Earnest answered.)

“So it’s safe to say that's the only thing the president is waiting for before he officially endorses Hillary Clinton is to let the votes be cast?” another reporter asked.

“I think that’s the essence of the process,” Earnest responded.

“Is it possible then that he will make a statement on this in some form as early as tonight?” another journalist asked. (Earnest did not think so.)

“Does the president consider Donald Trump to be a racist?” a reporter asked.

“Well, I don’t believe the president has used that specific word,” Earnest said. “There is a tendency on the part of some observers to assume that every time the president makes a comment affirming a core Democratic or even American value, that that is perceived somehow as a shot at the presumptive Republican nominee. And I think that says much more about the language that is used by the presumptive Republican nominee than it does about the values that are championed by the president of the United States.”

When Obama does decide to campaign for his successor, he is likely to be persuasive even beyond Democratic voters over which candidate has the temperament, experience and discipline to do the job he has been doing the past seven years, Earnest said.

“Regardless of who the Democratic nominee is, the president is an important validator,” Earnest said. “The president is somebody who has been doing this job for the last 7½ years. And I think it will be relevant to the decision-making of many Americans — not just Democrats, by the way, but some independents and some Republicans — who will be interested to hear what the president thinks about which candidate has the judgment, the temperament, the maturity, the decision-making skills to advance US interests around the world.”

“When the American people see footage of the president, for example, as he did today, meeting with the prime minister of the world’s largest democracy, the American people want to make sure that our interests and our country are being well-represented,” Earnest continued. “It matters who is sitting in that chair across from the Indian prime minister. That has significant consequences for our economy, for our planet, for our national security, for our alliances in that region and around the world.”

“And I would anticipate that over the course of the general election, the president will be making the case about how important that leadership and that symbolism is, and why he believes that the Democratic nominee is best suited to fill that job,” he said.

Late June 7, as results showed Clinton winning the Democratic primaries in four more states (New Jersey, New Mexico, California and South Dakota, while Sanders won the North Dakota and Montana contests), the White House issued a written statement saying Obama had called to congratulate her on clinching the Democratic nomination. Obama also called Sanders to congratulate him on his inspirational campaign and, at Sanders’ request, had agreed to meet with him at the White House on June 9, it said.

“The president congratulated Secretary Clinton for securing the delegates necessary to clinch the Democratic nomination for president,” the White House statement said, calling her becoming the first woman to be a major American party nominee “historic.”

“The president looks forward to continuing the conversation with Sen. Sanders about how to build on the extraordinary work he has done to engage millions of Democratic voters, and to build on that enthusiasm in the weeks and months ahead,” it said.

The Obama White House mission ahead is to unify the party behind Clinton to ensure a Democratic successor is elected to secure his legacy.