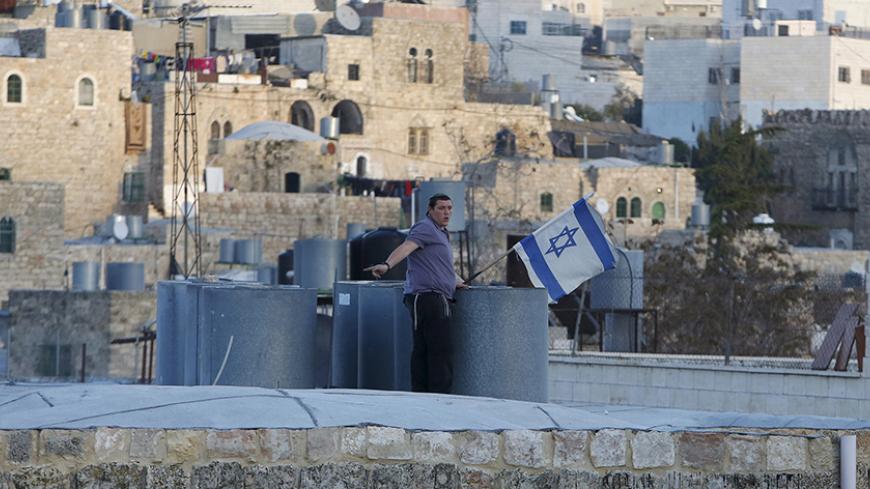 An Israeli settler puts up an Israeli flag over a house in the old city of Hebron in the West Bank, Jan. 21, 2016. - REUTERS/Mussa Qawasma

GAZA CITY, Gaza Strip — Numerous Palestinian groups are condemning Israeli Justice Minister Ayelet Shaked's plan to to apply Israeli laws to Jews living in West Bank settlements, which the groups said would further divide Palestinians and Israelis and give Israel the chance to annex the settlements.

During the May 1 conference held by the Legal Forum for the Land of Israel, Shaked announced her intention "to equalize conditions [for all Jews] within one year.”

The decision was immediately blasted from several directions.

“This step is considered a serious and unprecedented encroachment" that amounts to Israel annexing the land, Amin Maqboul, secretary-general of Fatah’s Revolutionary Council, told Al-Monitor. "This will destroy what’s left of the peace process.”

Maqboul said, “Israel is seeking to reinforce settlements, although they are illegal according to international laws, namely UN Security Council Resolution 465 of 1980 calling for dismantling Israeli settlements.”

Israel's objective, he said, is to eliminate the option of the two-state solution “and turn the Palestinian territories in the West Bank into cantons.” As long as Israeli settlements exist, settlers will continue to take over Palestinian natural resources such as water and soil, he added.

In a May 3 statement, Ahmed bin Mohammed al-Jarwan, the speaker of the Arab Parliament (affiliated with the Arab League), also condemned the plan to apply Israeli law to West Bank settlements.

“This [Israeli justice minister’s] draft resolution is designed to legitimize the occupation and annex large lands of the occupied West Bank, lands that are internationally recognized as occupied Palestinian territories according to the 1967 borders,” Jarwan said in his statement, stressing that the policies “will not succeed in legalizing the settlements.”

Abdul Hadi Hantash, the head of the General Committee for the Defense of Palestinian Land, told Al-Monitor, “There are about 255 settlements in the West Bank, built on an area that represents 9% of the entire West Bank territories. However, the expanded security zone allocated by Israel to protect the settlements — which includes the apartheid wall, the bypass roads and the military checkpoints — allowed these settlements to [expand and] occupy 40% of the West Bank.”

Hantash pointed out that the plan to apply Israeli laws to govern West Bank settlements is intended to legitimize settlements and reinforce the occupation. “This step serves as the final nail in the coffin of the two-state solution,” he said.

He added that the existence of settlements in the West Bank is a major cause for the raging Israeli-Palestinian conflict, “so the application of Israeli laws in these settlements would fuel tension and conflict.”

Lawyer Hanna Issa, who specializes in international and humanitarian law, said applying Israeli law to the West Bank settlements would contradict the rules of international law. “By virtue of Article 43 of the Hague Convention of 1907, Israel is not entitled to apply its laws on the occupied territories. The text stipulates: ‘The occupant [Israel] … shall respect the laws in force in the country [Palestine],'" Issa said.

He added that there are dozens of international resolutions issued by the Hague Convention, the Geneva Conventions and the United Nations Security Council calling on Israel to end its occupation and dismantle its settlements in the West Bank.

“Israel did not abide by any of these resolutions," he said.

Issa also accused the United States of protecting Israel and saving it from any UN resolution in favor of the Palestinians by using its veto power on the Security Council.

The Jordanian paper Doster published a report on Dec. 31, 2014, stating that of the 80 times the United States had used its veto power since the Security Council was founded in 1945, 42 of those vetoes were against condemning Israel's practices in the Arab region, and 31 of them were against decisions that served the Palestinian cause.

Regarding the measures the Palestinian Authority (PA) might take in response to the Israeli plan, Maqboul said, “Our position in the Palestinian leadership is clear. We want diplomatic efforts in international forums, especially the United Nations, to continue in order to establish a Palestinian state without any Israeli settler.”

He explained that the Palestinian leadership’s ammunition in confronting the Israeli plan includes international resolutions stipulating the need to end the occupation and dismantle the settlements in the West Bank, in addition to the PA’s efforts to punish Israel for its crimes against the Palestinians in the International Criminal Court.