Is it time to tame Iran's lawless publishing sector?

Iranians are debating whether to join the international Berne Convention on copyright, with advocates arguing that signing on will bring legitimacy to Iranian publishing and detractors fearing copyright enforcement will only benefit the corrupt and powerful. 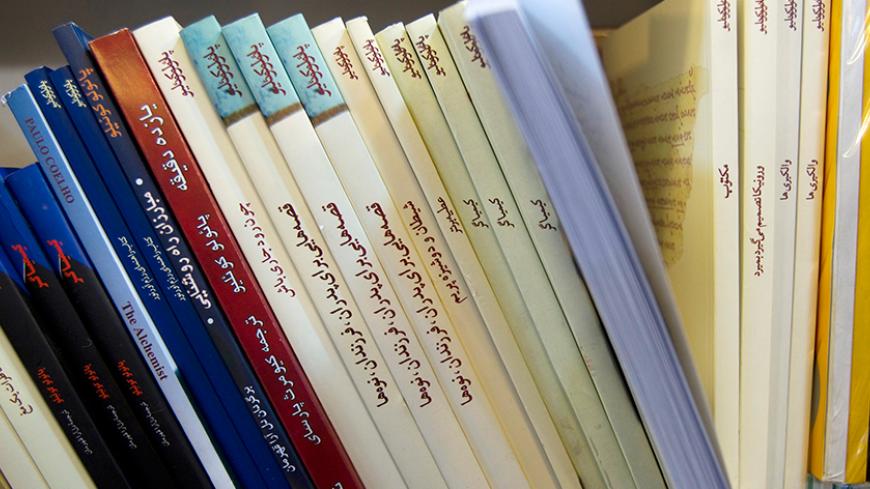 Translated novels are seen on display on a shelf at a bookshop in central Tehran, Jan. 29, 2011. - REUTERS/Morteza Nikoubazl

Foreign authors objecting to their books being translated and published in Iran without their consent is nothing new. Even before Atiq Rahimi, authors such as John Barth, J. M. Coetzee, Gabriel García Márquez and even Sir Alex Ferguson had raised similar objections.

Common to these objections is an expressed hope for Iran to join the Berne Convention for the Protection of Literary and Artistic Works. The convention was established in 1886 to guarantee copyright protection for artists and writers. Today, Iran is one of only 25 countries that have yet to sign on.

At present, more than 12,000 licensed publishers are active in Iran. Given that the Islamic Republic does not adhere to international copyright law, these publishers are free to republish any foreign book without paying any attention to copyright.

"In one of my first trips to book fairs abroad, after coming to contact with foreign publishers, I realized that buying books from them and then translating and publishing them without their permission is a very strange thing to do. Ethical considerations prevented me from doing this," Reza Hasheminejad, manager of the Iran-based Ofoq Publishing, told Al-Monitor. His company, which publishes children's and young adult literature, was first licensed to operate in Iran in 1990 and bought its first reprint rights to a foreign work in 1997, even though it is not legally required to do so under Iranian law.

Indeed, Ofoq has been taking the issue of copyright seriously in past years. It has released quite a few works in the Iranian market that clearly indicate that the right to reprint the work has been purchased, including books authored by prominent American author Paul Auster. This indication of respect for copyright is not customary in Iran.

There are other Iranian publishers that obtain the rights for a work before publishing and also, of course, translators who ask authors for permission to translate their works. Khashayar Deyhimi, who has edited and translated more than 100 books, is one of them. He told Al-Monitor, "I consider it my moral duty to ask permission and this is also why I have ended up becoming good friends with some of these writers." Nonetheless, Deyhimi said that considering the current situation in Iran, he is against joining the Berne Convention. He believes that if that were to happen, publishers would gain control over the translation process "and the quality of translations will thus decline." He told Al-Monitor, "For most publishers, quality is not important and non-Iranian writers have no way of knowing whether the Persian translation is correct. I am in contact with foreign publishers and writers and I know that most of them have no idea about the book translation process in Iran."

Iranian author Hossein Sanapour disagrees with Deyhimi. In an interview with Al-Monitor, Sanapour addressed the problems caused by "multiple translations" and said that he believes joining the Berne Convention will end this "chaotic" atmosphere and help improve the quality of translations. He told Al-Monitor, "It will help to increase the circulation of books published in Iran, which will result in better pay for translators. When there is copyright, translators will spend more time on their translations, and naturally the end result will be better."

Sanapour believes that the financial benefits of joining the Berne Convention outweigh the advantages of staying out. "It will help produce knowledge, and especially literature, in Iran. The process of translation from Persian to other languages will also gradually change in [Iran and Iranian authors'] favor, although [Iranian authors] might never dominate it. More importantly, in my opinion, it will encourage publishers to publish original works authored in Persian. Of course, second-rate and unprofessional publishers and translators will not benefit from Iran joining the Berne Convention."

Although Hasheminejad told Al-Monitor that he believes Iran joining the copyright convention in the near future is inevitable, he underscored that he is not happy about it: "I predict corruption. In the words of Bertolt Brecht, he who laughs last has not yet heard the bad news." But what would be the bad news? Hasheminejad told Al-Monitor, "I think the Iranian book market will more than before be affected by nepotism and rent-seeking. The publishers with more influence and connections will benefit more."

Deyhimi also believes that given the present circumstances, joining the Berne Convention will worsen the cultural, ethical and financial problems that already plague Iran's publishing sector. He told Al-Monitor, "I believe in copyright. However, the problem is that for Iran, joining the Berne Convention only looks good on the surface. In reality, many people will be negatively affected by it. The current chaotic situation caused by irresponsibility and immorality — and the inefficiency of the judicial system — will make copyright laws irrelevant."

The issue of copyright was first addressed in the Iranian legal system back in 1925, in the Trademarks Registration Law. However, protection of the rights of authors and artists was not fully addressed until legal amendments in 1969. The 1969 amendments hold as the legal basis for copyright in Iran to this day. In Deyhimi's telling, however, the existence of this law does not guarantee its enforcement. "I have verdicts against a publisher that has reprinted 23 of my books up to 10 times, issued by both the Publishers' Union and the Board of Dispute [Settlement]. However, the judiciary does not recognize the verdict, and thus the Ministry of Culture and Islamic Guidance says that it cannot execute it."

Hasheminejad told Al-Monitor that the groundwork needs to be laid before Iran can join the Berne Convention, as Iranian publishers rarely observe even Iran's own copyright laws. He argued that Iran needs to gradually join the Berne Convention, saying, "For Iranian publishers, the problem is not necessarily financial. Rather, it has more to do with organization and awareness. The majority of them are not familiar with copyright laws, do not receive any consultations regarding international relations and legal matters and some are not even fluent in English."

With the removal of nuclear-related sanctions, it appears that Iran can proceed with joining the World Trade Organization. However, one prerequisite for membership is accession to the Berne Convention. Sanapour told Al-Monitor, "Nearly two decades of research and studies have been conducted by the Ministry of Culture and Islamic Guidance in this regard. Recently, a seminar was conducted regarding the issue. If we pay attention to the comments, we can see that the ministry is interested in Iran joining the international copyright convention. More importantly, the ministry has prepared a bill regarding this issue and has sent it to the parliament. The [outgoing] parliament did not consider the issue, but we are hoping that the [incoming] parliament will take it into consideration and confirm it. I am therefore hopeful that we will join the international copyright convention in the near future."