Egypt’s acceptance into the Pan-African Parliament is seen as a positive step, but it might not deliver as much as Egypt wants. 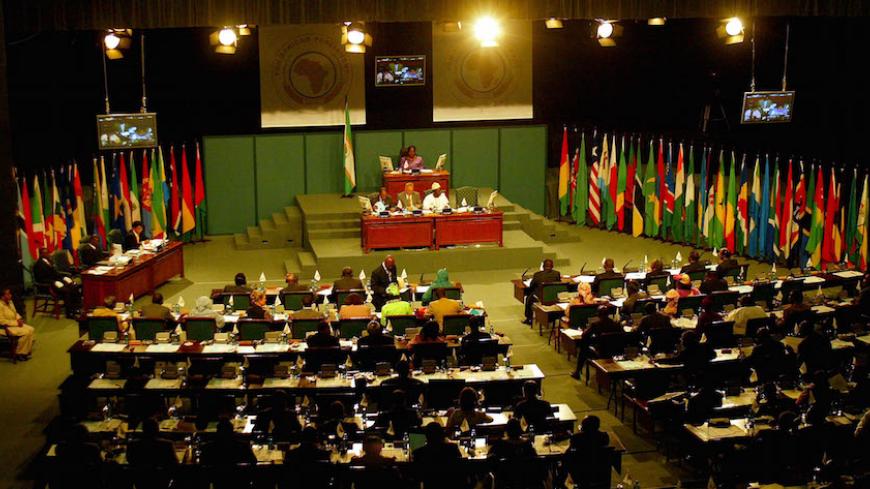 Hundreds of guests and delegates gathered for the opening of the Pan African Parliament's second sitting in Midrand, north of Johannesburg, Sept. 16, 2004. - REUTERS/Juda Ngwenya

CAIRO — Egyptians have high expectations for their country’s progress now that it has returned to the Pan-African Parliament after a three-year absence. Officials hope the parliament will help resolve Egypt’s issues with other African countries, the most notable being the Nile waters crisis, the Renaissance Dam dispute, the Halayeb and Shalateen land issue and economic matters.

The Pan-African Parliament, based in Midrand, South Africa, is the advisory body of the African Union (AU), seated in Addis Ababa, and its 54 member states. The AU suspended Egypt’s membership in 2013 following the June 30 Revolution and the overthrow of President Mohammed Morsi after protests in Cairo, considering his ouster a violation of the constitutional order.

The AU lifted Egypt’s suspension in August 2014, after Abdel Fattah al-Sisi was sworn into office in June that same year after winning presidential elections with 96.9% of the votes.

On May 3, five members of the Egyptian parliament were sworn in as members of the Pan-African Parliament. Mai Mahmoud, one of the newly sworn-in members and secretary of the African Affairs Committee of the Egyptian parliament, told Al-Monitor, “We are counting on Egypt’s return to the Pan-African Parliament to be part of a solution to the many crises, most notably the Renaissance Dam crisis with Ethiopia and the Halayeb and Shalateen issue with Sudan. Yet, our eyes are focused on the restoration of ties.”

Mahmoud said that the Egyptian delegation has signed more than 30 joint agreements to establish parliamentary friendship associations, including the Nile Basin countries of Ethiopia, Rwanda, Burundi, Sudan, Uganda and Kenya.

In a visit to Cairo Feb. 24, Pan-African Parliament Speaker Roger Nkodo Dang of Cameroon, representing Central Africa, said in a statement that the parliament can intercede to help resolve the Renaissance Dam issue between Cairo and Addis Ababa if the union’s member states vote to give the parliament full legislative powers. “For [the Pan-African Parliament] to intercede to resolve this issue, it must first have a legislative function,” he said.

Twenty-two member states must be in agreement to grant parliament full powers. Five are on board so far, according to Egyptian parliamentarian Mustafa El-Gundy, who was recently appointed diplomatic and foreign affairs adviser at Dang’s Pan-African Parliament office. Gundy told Al-Monitor, however, that 75% of the parliament's resources come from foreign funding, rather than member states, so the African countries fear that the donor countries will end up making decisions if the parliament is given broad powers.

The vision driving the AU at its inception was that African issues should be resolved within Africa, without third-party intervention. To that end, for example, an African court would resolve such disputes as that over the Renaissance Dam, Gundy said.

He stressed that dialogue between neutral parties representing Egypt and the Nile Basin countries before the Pan-African Parliament will have a significant impact on the convergence of views. Gundy said the Pan-African Parliament will hold a session in which the Egyptian and Ethiopian sides can formally express their views on the Renaissance Dam. Egypt will insist on a historical right to its share of the Nile's water, while Ethiopia will rely on its rights under the agreements signed in the colonial era.

“Based on that, members of parliament will be divided between both sides,” said Gundy. He stressed that in case the issue is raised based on the right to water, the consensus view will be that both parties get what is rightfully theirs. Egypt receives less than 630 cubic meters (166,428 gallons) of water per year, which is below the hydraulic poverty line, while Ethiopia, where rain water is abundant, is not suffering from a lack of water or power generation.

Hani Raslan, the head of the Nile Basin Studies Unit at Al-Ahram Center for Political and Strategic Studies, told Al-Monitor that the Pan-African Parliament is a tool to allow African peoples to communicate with each other, but it can’t be relied on to resolve intensely contested issues like the Renaissance Dam and Halayeb and Shalateen.

Raslan believes that although Egypt’s return to the Pan-African Parliament is good, and will provide the country with a forum in which to raise issues and explain its positions, Egyptians shouldn’t get their hopes up. He explained that former Libyan leader Moammar Gadhafi had at one time put forward a plan granting the Pan-African Parliament broad powers, but the majority of African leaders rejected the idea.

As part of an attempt to regain a pivotal African role, Egypt will host the October session of the Pan-African Parliament, in Sharm el-Sheikh.