Why is Congress keeping its powder dry on Iran sanctions?

Republican leaders are determined to craft the most comprehensive legislative package they can get through Congress. 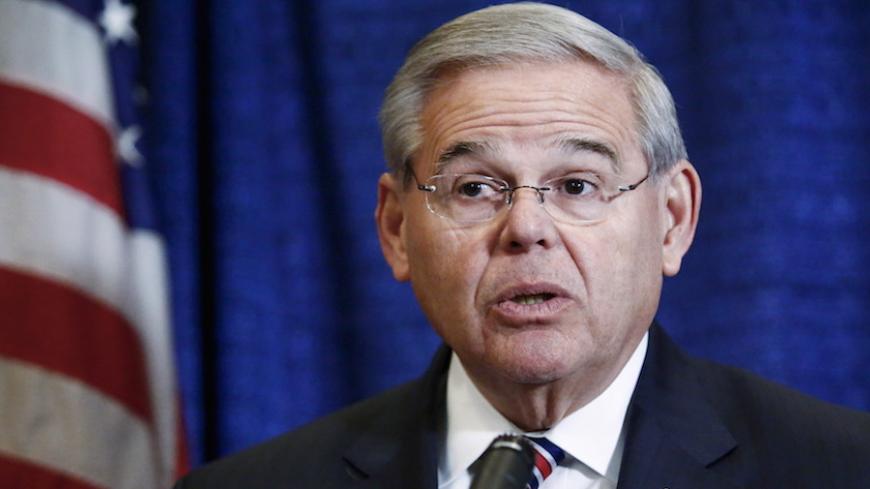 Congress hasn't managed to pass a single Iran-related bill since the nuclear deal went into effect last year, but that doesn't mean its supporters can breathe easy.

Behind the scenes, lawmakers in both chambers and both parties have been working together on comprehensive legislation that will seek to punish Iran for its human-rights abuses, ballistic missile tests and other activities. That strategy could help explain why a bill to renew sanctions on Iran's energy sector that expires at the end of the year has been bottled up in the Senate banking panel for the past 11 months despite bipartisan support for its passage.

"My sense on the Republican side is that the leadership is not going to accept a mere extension [of the Iran Sanctions Act] without additional sanctions," said Sen. Robert Menendez, D-N.J. "Certainly I want to get it done, period. But if it helps drive a bigger package, that's a good thing."

Menendez, a member of the Senate Foreign Relations Committee who opposed the Iran deal, has been working for months with panel chairman Bob Corker, R-Tenn., on broader sanctions legislation. That effort is on the verge of succeeding, Corker told Al-Monitor May 11.

"We have a bipartisan bill," Corker said, "and we're getting ready to roll it out real soon."

Menendez said a recent New York Times magazine profile of Obama's foreign policy advisor, Ben Rhodes, has only energized deal-skeptic lawmakers because of the dim view it takes of Congress. In the much-discussed article, Rhodes says that a "sober, reasoned public debate after which members of Congress reflect and take a vote" is "impossible."

"Certainly those of us who were already [wary] before the Rhodes interview became public and are very close to producing an Iran non-nuclear sanctions package obviously feel not only justified but vindicated," Menendez said.

House members likewise have increasingly been signaling their intentions to go after Iran with everything they can muster.

"Before this president leaves office, we must do everything possible to prevent his administration from making further concessions to Iran," House Speaker Paul Ryan, R-Wis., wrote in a May 9 op-ed in the right-leaning online news site Independent Journal Review. "This includes blocking any attempt to make it easier for the mullahs in Tehran to conduct their trade in dollars. We are also committed to renewing the Iran Sanctions Act by the end of this year."

"In the coming weeks," Ryan promised, "House Republicans will present the country with an overarching vision for our national security."

House Foreign Affairs Committee Chairman Ed Royce, R-Calif., and ranking member Eliot Engel, D-N.Y., have been working on such legislation for several months. The two leaders at one point hoped to have a bill ready in time for the American Israel Public Affairs Committee (AIPAC) annual conference in late March, but Engel said the timing wasn't right.

"We at first thought that maybe we could speed up whatever we could because the AIPAC activists could be great people to lobby for us," Engel told Al-Monitor. "But we realized it was rushing it and it wasn't really ready and we really didn't have consensus and we kind of ran out of time. But I want to make sure Iran's feet are held to the fire for everything that was promised under the JCPOA [Joint Comprehensive Plan Of Action], and if there are violations from Iran, we want to deal with them."

Engel, however, said he could support a stand-alone renewal of the Iran Sanctions Act, which lawmakers view as a vital backstop in case Iran cheats on its nuclear commitments under the JCPOA. Obama administration officials have urged Congress to hold off on the renewal for now, arguing that multilateral sanctions at the United Nations could be reinstated without the possibility of a veto if Iran is deemed to have cheated. But it's not clear if the president would veto such a bill.

"I think each issue stands on its own," Engel said. "I would be in favor of passing an ISA bill stand-alone. But I would also be in favor of doing that bill and another bill."

"I think we could do both and get broad consensus," Cardin said, "but I do not sense a lot of enthusiasm by the Republican floor leadership to move in that direction."

As a result, he said, there has been "no progress" in his talks with Corker, suggesting that the chairman may end up releasing his bill with Menendez on board but not Cardin.

The negotiations haven't prevented individual members from trying to take aim at Iran on their own, but those efforts have so far gone nowhere. On May 11, the Senate voted 57-42 — not enough to pass the 60-vote threshold — on an amendment to an energy spending bill by Sen. Tom Cotton, R-Ark., that would have prohibited the United States from buying heavy water from Iran to prevent it from inadvertently violating the deal.