Can the Islamic State be defeated without Kurds?

Turkey insists Rojava's People's Protection Units must be excluded from the fight against the Islamic State on the Menbic-Jarablus front. 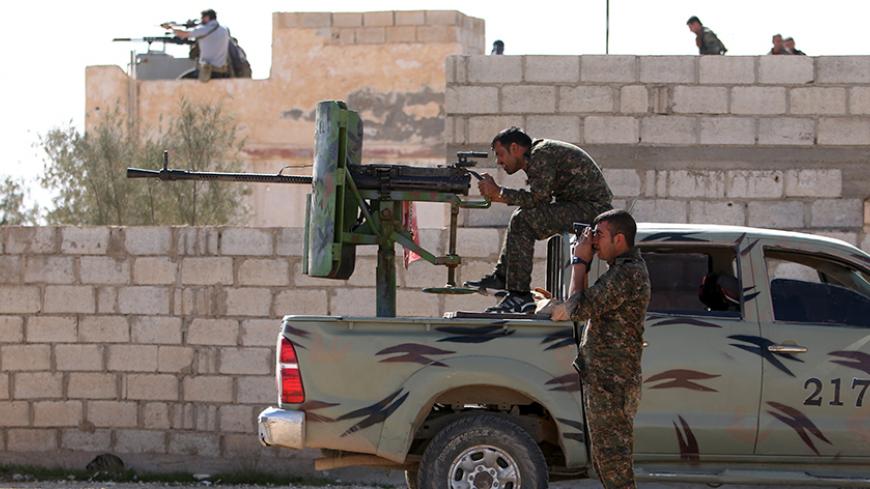 Syrian Democratic Forces fighters, a force composed mostly of Kurdish fighters, look through a scope and a pair of binoculars on the outskirts of al-Shadadi town, in Hasaka countryside, Syria, Feb. 19, 2016. - REUTERS/Rodi Said

The United States is trying to devise a plan that will appease Turkey while still allowing Kurds to help expel the Islamic State (IS) from the Menbic-Jarablus front in Syria. Turkey's resistance to the Kurds' participation is creating discord with the United States and further exposing Ankara's hostility toward the people of Syrian Kurdistan (Rojava).

Ankara insists on an operational plan that excludes Rojava's People's Protection Units (YPG). The United States might come up with a plan that will take Turkey’s sensitivities into account by making the YPG less visible, but the group will still play a key role in the fight.

According to information supplied to Tolga Tanis, Washington correspondent for Turkey's Hurriyet daily newspaper, Turkey has two conditions for a Menbic operation:

1.Arab tribes that will take part in the operation should be separate from the Syrian Democratic Forces (SDF), which is affiliated with the YPG.

2.The United States must step up its air support to the Turkey-backed opposition groups in Marea.

According to Hurriyet writer Verda Ozer, who accompanied Erdogan on his US trip, Ankara made a proposal to Washington. "Give up the PYD. Instead, we will fight [IS] on the ground with Arab and Turkmen groups we support,” Ozer wrote. The PYD is the Kurdish nationalist Democratic Union Party; the YPG is its armed branch.

There are, however, problems with both of Turkey's proposals. The YPG breaking off from the SDF is incompatible with the realities of the region, and groups supported by Turkey cannot control the region on their own. The numbers and capacities of these groups, said to have 3,000 fighters, are exaggerated. Moreover, their relations with al-Qaeda and Salafi jihadist groups are being overlooked.

The US administration insists on working with the SDF, whose backbone is the YPG, but which also has Arab, Turkmen and Syrian elements.

These contradictory plans are delaying the closure of a 98-kilometer (61-mile) border gap that is IS' only window to the outside world and accommodates the flow of militants. Since the Syrian army recaptured Palmyra from IS, the United States also feels the need for a victory — hence, the increasing pressure on Ankara. A US delegation was dispatched to Ankara on the heels of Erdogan’s Washington visit to work on operational plans.

The current plan being considered is to delay action on the Jarablus front and focus on Menbic. The Kurds are being flexible to ease American planning but without exiting from the stage. An interesting development in this critical process has been the setting up of the Menbic Military Council. This may well be part of a formula to lower the YPG's visibility. The council, established at the Tishrin Dam (south of Jarablus), is discreetly led by the Kurds and includes groups such as Shams al-Shamal Brigades, Suwwar al-Menbic, Jund al-Haramain, Martyrs of Euphrates and Turkmen al-Menbic.

Al-Monitor asked a Kurdish source familiar with US-Kurdish interactions whether the United States, which used to attach priority to liberating Raqqa, has changed its approach. What does the American plan entail now? Has it shared this plan with the Kurds? What role will the Kurds have? Is the United States in touch with Russia about this issue?

Our Kurdish source replied, “The US had shifted priority from Jarablus and Raqqa because of Turkey’s reactions. We wanted to liberate west of Euphrates first. But when the Syrian army succeeded at Palmyra, the US agreed that the Menbic operation was feasible. After all, they also need a victory. The US doesn’t want the regime forces to control this region.

"[Bashar al-]Assad’s forces are preparing for operations at Aleppo. If the SDF won’t do it, regime forces will dominate the region. The plan is to first liberate Menbic and set up a civil administration there, as was done at Tell Abyad. Meanwhile, Jarablus will be encircled, but not under the YPG banner. Of course the SDF will be the main force, but to appease Turkey, credit will be given to the role of the local population. I think the US has shared this plan with the Russians.”

What do Kurds say to Turkey’s idea of deploying other forces including the Turkmens? Al-Monitor's Kurdish source said that, just as there are Turkish sensitivities, there are also Kurdish concerns. “YPG will not allow Turkmen units like the Sultan Murat Brigade to enter the area. We cannot allow [IS] mentality to prevail in the region under different connotations," he said. "What will change if [IS] goes but is replaced by al-Nusra Front?”

“The Menbic Military Council was [just] established. … I don’t have the full details, but Kurds will either be a part of that body or will coordinate with it. Fifty percent of Menbic villages are Kurds. There can’t be an operation like this without the Kurds. Our priority is to cleanse these villages from [IS]. Second is Jarablus, which is the transit route for [IS]. Unless you cut that off, you cannot liberate Raqqa,” Muslim told Al-Monitor.

“I don’t know how they will persuade the AKP [Justice and Development Party] rule in Turkey, but something has to be done. You cannot ignore that Kurds make up more than 50% of Menbic, Azaz and Al Bab. Kurds have armed units inside the SDF that used to fight against the regime, and now they fight [IS]. Turkey cannot reject the Kurds. If it is going to live alongside the Kurds, then it has to accept their existence.”

Kurds refer to Tell Abyad when they discuss the local administration to be set up after the liberation of Menbic. Kurdish sources persistently say the YPG’s goal is not to dominate the area after expelling IS. As in Tell Abyad, control will be handed over to local elements, they say.

Naturally, despite this apparent flexibility, Kurds have not given up on their goal of opening a corridor between Afrin and Kobani cantons. They dismiss Ankara’s allegations that this corridor is an integral part of the Kurdish dream of setting up a Kurdish state between the Tigris River and the Mediterranean Sea.

It's important to establish which force will be liberating Menbic and Jarablus, but just as vital is determining who will be in charge afterward. Kurds have been making discreet contact with some local notables and tribal leaders in the area controlled by Turkish-supported groups. Kurds who are careful to keep a low profile in such contacts have been able to set up a friendly network in the Shehba area despite Turkey's warning. There are also Arabs and Turkmens in that network. Kurds are preparing the joint administration of Shehba after liberating it from IS by setting up a council of elders and an executive committee.

Parallel to civilian activities, military operations were launched from the Tishrin Dam to the north and from Afrin to the east. This is how Menagh air base was recovered. Kurdish operations were halted near Azaz and Tel Rifat because of artillery fire from Turkey and the US decision to appease Ankara.

In summary, IS infiltration of Turkey through the 60-mile border gap, the role of those infiltrators in terror operations in Europe and the relocation of some of them to Libya have made Ankara’s game-spoiler attitude unbearable. Washington, which has promised Ankara there won’t be a Kurdish corridor, feels it has to do something. Americans don’t think Ankara’s demands that Arab tribes should be separated from the YPG are workable. Washington isn't in favor of US air support to Turkish-supported forces on the ground, which would then be allowed to control the Menbic-Jarablus line. We will now wait and see how the United States — squeezed between its NATO ally Turkey and the Kurds, who are achieving results with their organizational and operational capacity — will make do with interim formulas.