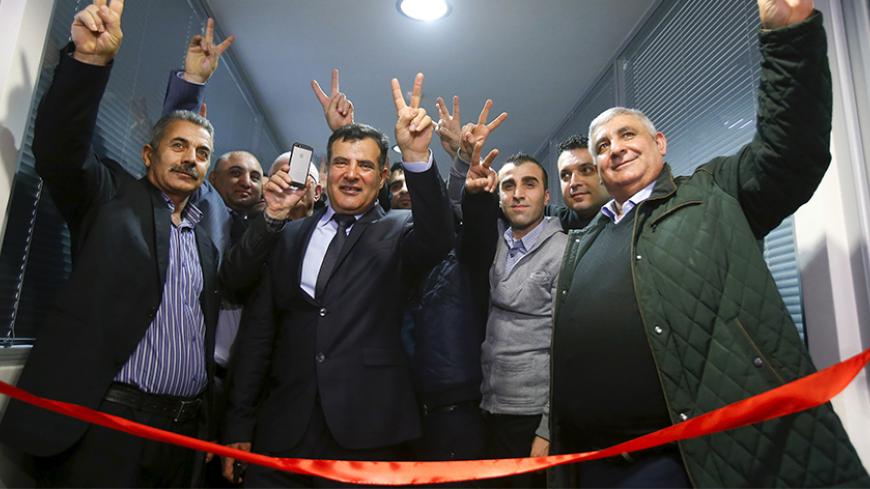 Participants pose for a picture during a ceremonial opening of the representative's office of Syrian Kurdistan in Moscow, Feb. 10, 2016. - REUTERS/Maxim Shemetov

Turkish President Recep Tayyip Erdogan has long insisted that the Kurdish Democratic Union Party (PYD) and the People's Protection Units (YPG) are terror organizations that are more dangerous than the Islamic State (IS). If one day he sees YPG flags in the corridors of the European Parliament, Erdogan will swear never to return to Brussels. Remember 2009, when he silenced Israeli President Shimon Peres with his now infamous upbraiding, announcing, “I do not think I will be coming back to Davos after this.”

Northern Syria’s PYD and YPG are steadily expanding their legitimacy in Europe. The YPG flags on the doors and walls of the European Parliament are but a small indicator that Ankara’s protests have made no impact.

The political and military actors of Syrian Kurdistan, known as Rojava, have succeeded in opening representative offices in various corners of Europe despite stern warnings from Ankara. A turning point came for the Kurds on Feb. 8, 2015, when French President Francois Hollande hosted a meeting with Asya Abdullah, the co-chair of the PYD, and Nesrin Abdullah, the commander of YPG’s female branch, the Women’s Protection Units (YPJ).

The Syrian Kurds, who are treated warmly both by the Russians and the West, opened their Moscow office not in the name of the PYD, but that of the Rojava administration on Feb. 10. They are diplomatically active in Brussels, which houses NATO, the European Commission and European Parliament. They have already opened offices in Prague and Stockholm. Copenhagen is next.

Erdogan had reacted sharply to the opening of the Moscow office, saying, “I am calling on countries supporting the PYD: If you have a conflict with them, these people will come and attack you with bombs like [IS]. From here I am warning Russia. They think that because they allowed the opening of the PYD office, they will be safe from them. They are wrong. There will be operations in Russia.”

The Prague office is managed by Iman Dervis of the YPJ and Servan Hasan of the PYD. Speaking to Al-Monitor, Hasan said that the opening of the office implies political recognition.

Asked about the choice of Prague, he said, “We opened this office not only for the Czech Republic, but for all of Europe. The reason why we opened in Prague first is because it is the first city Nesrin Abdullah visited. She met with officials of the Defense Ministry. Czechs, who lived under the sovereignty of different powers, represent a European society that comprehends the situation of the Kurds. They are interested in our efforts to build an administration that respects democratic and human rights. Moreover, our struggle against the Islamic State is greatly appreciated. They are all aware that IS is threatening not only the Middle East but also Europe. That is why there is much interest in the YPG and YPJ. Europeans support our struggle against radical Islamists. The Czech Republic has close relations with the Arab world. They follow developments in the region closely.”

Asked about military or financial assistance from the Czech Republic, Hasan said, “We have contacts with several ministries, but we haven’t received any weapons or money. As Kurds, we are fighting terrorists. In the field we are working with the United States. Our true function here is to establish diplomatic links and form strategic friendships.”

Kurds always advocate a model to their European contacts that will allow diverse ethnic and religious groups to coexist in the Middle East. Of note, there is serious European interest in the Kurdish canton system that allots women a political representation quota of 40%.

The next office was opened in Stockholm on April 18 in the name of the Rojava administration. The opening was attended by Nesrin Abdullah, Omer, the Rojava administration’s European representative Sinem Muhammed, the PYD’s representative in Sweden Siar Ali and Bassam Ishak, president of the Syriac National Council of Syria. A Swedish minister and several parliamentarians were also present.

Zuhat Kobani, the PYD representative in Europe, told Al-Monitor the steps the group has taken there: “The office in Sweden represents Rojava, not the PYD. We will also open an office in Copenhagen. Politically, we have the support of the Danish government. We will open the office as soon as we find the right location. We are also working to open offices in Berlin and Paris. We have found a location in Paris.

"We are not officially recognized in Europe, but we have de facto recognition. Europeans allow us to open offices because they feel they must display political solidarity with our struggle in Rojava. We keep explaining our struggle with IS, our aspirations for democratic autonomy and democratic federalism. Europeans are slowly understanding our issues. We are not seeking assistance from European governments. Our goal is to ensure our legitimacy. These offices will develop relations with European institutions and provide information services.”

Denmark, which in the past has infuriated Turkey by allowing pro-Kurdistan Workers Party (PKK) TV channels to broadcast there, appears ready to anger Turkey once more.

“It is very difficult for me to distinguish between the PKK and YPG,” said Danish Foreign Minister Kristian Jensen, who had received much praise from the Turkish public — unlike his predecessor Martin Lidegaard, who had declared, “The PYD is not a terrorist organization. It is different from the PKK.”

Following the IS attacks in Europe, Rojava’s standing has changed. Last month, the Danish government announced it was ready to join the international coalition with F-16 jets and 400 soldiers.

There are now rumors that Denmark may even provide a military contribution to the YPG-led Syrian Democratic Forces, like the Americans.

To prevent the PYD and the YPG from gaining legitimacy in the West, Ankara is arguing that these two organizations are extensions of the PKK and will resort to terror when under pressure. It also claims they work for the Syrian regime and is carrying out ethnic cleansing against Arabs and Turkmens. But this futile approach at times backfires. While the YPG is praised for fighting against IS, Erdogan’s frequent outbursts accusing the PYD and YPG of terrorism give the impression that Turkey supports IS.

Erdogan might not have a problem explaining to his national constituency why countries like Denmark, which he had denounced as terror supporters, are allowing the PYD and YPG to operate in their territories. He is likely to describe it as “provocation” by anti-Turkish forces, and nobody in Turkey will think of asking where the Turkish government had gone wrong.