In an interview with Al-Monitor, Israel's envoy to the United Nations, Danny Danon, shares insights into the issue he deals with daily, including cyber warfare, terrorism and raising alarms about Hezbollah. 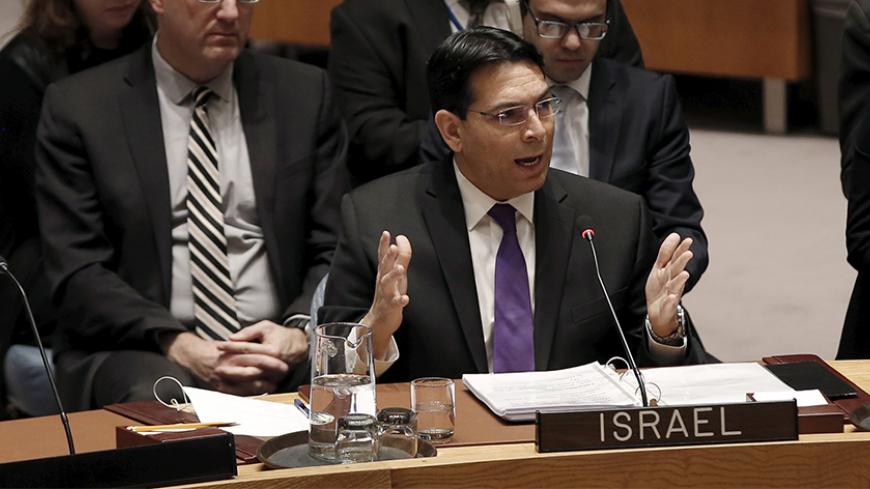 On April 14, Israel’s UN envoy, Danny Danon, was preparing for a short appearance before the UN Security Council at noon. Danon had readied a brief speech describing how Hezbollah has been arming itself uninterruptedly.

In an interview with Al-Monitor conducted at UN headquarters in New York, Danon said, “I am going to say something very harsh about the double standard toward Israel — that the blood of the Jews in Israel is no different than the blood of the Jews in Brussels and in France, and then I’m going to ask them why they condemned the terror attacks there and not the terrorism in Jerusalem.”

Danon explained, “I know this is harsh, but I want to rattle them, to make them feel uncomfortable. In the past four months, the Security Council has adopted 12 anti-terrorism resolutions, and not once have they mentioned Israel.”

Danon began his appointment at the United Nations last October, just as the terror wave, also known as the individual intifada, erupted back home. Like his predecessors, he is constantly busy trying to fend off UN Security Council resolutions condemning Israel and Palestinian declarations designed to embarrass Israel.

Al-Monitor:  Some 40 years ago [in November 1975] the UN adopted Resolution 3379, equating Zionism with racism. Could a similar resolution be adopted today?

Danon:  I don’t think so, because today there are strong Western countries that understand where to draw the line. I struggle to enlist the moral majority of the big democracies so that they reject all such attempts. I do it all the time, even if it doesn’t always succeed.

For example, about two weeks ago we had a debate on the status of women, and at the end, they adopted a resolution condemning Israel on the issue of gender equality. I battled against ambassadors who told me that it would go through in any case and I was wasting my time. I didn’t give up, because it’s ludicrous to blame us for Palestinian domestic violence by claiming it’s linked to the occupation and the settlements. That’s absurd. The resolution went through, but at least I put up a good fight. There was also a recent attempt here to censor parts of an exhibition about Zionism showing Jerusalem as the capital of Israel, claiming parts of it were inappropriate. I fought against that and managed to prevent it [the censorship]. I argued that by disqualifying exhibits about Zionism, the UN was undermining the State of Israel’s very existence as the home of the Jewish people.

Al-Monitor:  You put a lot of effort into convincing the UN about the dangers of Hezbollah’s armament. Is anyone listening to you?

Danon:  Even if no one listens, I put the issue on the table. For me, it’s an agenda, a work plan. I am building up the public diplomacy case. I want to warn in real time that Hezbollah is growing stronger, acquiring missiles and that eventually they will instigate a conflict with us. This is sure to happen, and we will respond. When we respond, the UN will attack Israel [through declarations], but then we will be able to show that we warned in real time how Hezbollah was arming itself, and no one tried to stop them. I mention the issue at every opportunity and provide data — the names of villages where Hezbollah operates, next to schools, next to UN camps, inside homes — placing missiles in them. I tell them, eventually we will have to destroy these missiles, and there will be civilian casualties, so do something. The Security Council must wake up and take a stand on this issue.

Al-Monitor:  Do the recent terror attacks in Europe help Israel make its case or do they make it harder?

Danon:  There’s no doubt that public opinion is changing here [outside of Israel], too, and it’s easier to explain what we have to endure. There’s no doubt this is an important issue for many countries. Muslim states are afraid of it. Sadly, we have experienced much terrorism, and we know how to handle it, but some countries are truly under stress, troubled by how they can get on with life in the shadow of terrorism. I am asked about this more and more in personal conversations at the UN too. Ambassadors want to know, for example, how we maintain security at airports and how to conduct cyber warfare, in which Israel is a world leader. I take these opportunities to showcase aspects in which we excel. I have brought Israeli experts here, army people, top brass, for briefings on issues of cyber warfare and terrorism.

Al-Monitor:  But what one hears are mostly condemnations of Israel on the Palestinian issue, and that reflects Israel’s difficult international position. Do you share this opinion?

Danon:  Yes, that’s true. That’s why, as far as I’m concerned, the UN is like a frontline position for the State of Israel. An arena of battle. I get up in the morning and check what ambushes are planned for us. For example, there are currently three initiatives at the Security Council that we are blocking and managing at the same time.

There’s a recent Palestinian proposal calling for condemnation of Israel, and the Palestinians are revving up their engines in order to present it to the Security Council. There’s an initiative by New Zealand to renew negotiations [with the Palestinians], and there’s the “French initiative,” which started out as a proposal to be voted on by the Security Council and has now turned into an initiative to hold an international conference [to resolve the Israeli-Palestinian conflict]. One of the French ideas is to conduct one of the sessions of such a conference here at the UN. The French have even assigned a special representative who came here and met with various ambassadors, myself included.

Al-Monitor:  It’s not clear what’s so bad about the French peace initiative for an international conference. It sounds like a good way to engage. Why fight it?

Danon:  For now, we haven’t taken a stand. I met the French representative and heard him out. He explained that right now he’s collecting information from all the sides, so let’s wait and see what he suggests. From what I understand, the idea is to hold the two sessions — the first without the presence of the Palestinians and the Israelis — at the UN or in France, and then, in September, a meeting will be held with the representatives [of both sides].

Al-Monitor:  What’s your relationship with the UN Palestinian ambassador like?

Danon:  Riyadh Mansour, the Palestinians’ UN ambassador, attacks me all the time. It’s true that these are tense times and that comes across here, too. Generally, when things are quiet in Israel, they’re calm here, too. When there’s tension and terrorism and incitement in Israel, here too we clash. These are not two different worlds, and the Palestinian representative is busy criticizing us and inciting against us, and we are constantly exposing his lies. At the height of the terror wave, for example, he accused Israel of removing internal organs from the bodies of Palestinian terrorists before handing them back. I was amazed. He went around everywhere saying it, in speeches, at the Security Council, in media briefings, and he also circulated a letter to all the ambassadors.

I issued a response, saying this was blood libel, and proved to the ambassadors that it was all a crass lie. I explained that there really was a debate in Israel about whether to hand back [to the Palestinians] the bodies or not — and it was decided to hand them back — but to say that we would harvest organs is going way too far. Does anybody really imagine we would do that? And he, the Palestinian ambassador, stands here with a suit and tie and lies. I believe that people here understand that if we are to move forward a [peace] process, we need a partner.

Al-Monitor:  Does your being a Likud Party man, affiliated with the hard-core right, perhaps increase the hostility?

Danon:  As far as I’m concerned, this no longer holds. Even if people talked about it at first, it doesn’t exist any longer. Those who are against us are against all Israelis — against the right, the left, the residents of Tel Aviv and the settlers.

I try to steer a positive line alongside the battles that we wage, to present more and more aspects of Israel as a progressive state, with high technology and achievements, as many exhibits and exhibitions as possible. I plan to invite the ambassadors to visit Israel. I think this will make a difference over time.

We are getting ready for Independence Day [May 12], and we’ve decided to invite the ambassadors to see Fiddler on the Roof on Broadway. We’ll invite everyone, and those who want, will come.

Al-Monitor:  What has surprised you about the work here?

Danon:  ​The off-the-record conversations with envoys. In official talks and public speeches, there are few surprises, and you hear the condemnations and attacks against us. But in many intimate conversations, I hear totally different things, sometimes from the same people [who condemn Israel publicly]. I hear respect for the State of Israel. They don’t say so out loud, but in my talks with them, I hear it all the time.