Why did Rouhani pull out of Austria visit?

The recent abrupt cancellation of a planned visit by Iran’s President Hassan Rouhani to Austria is raising a great deal of speculation. 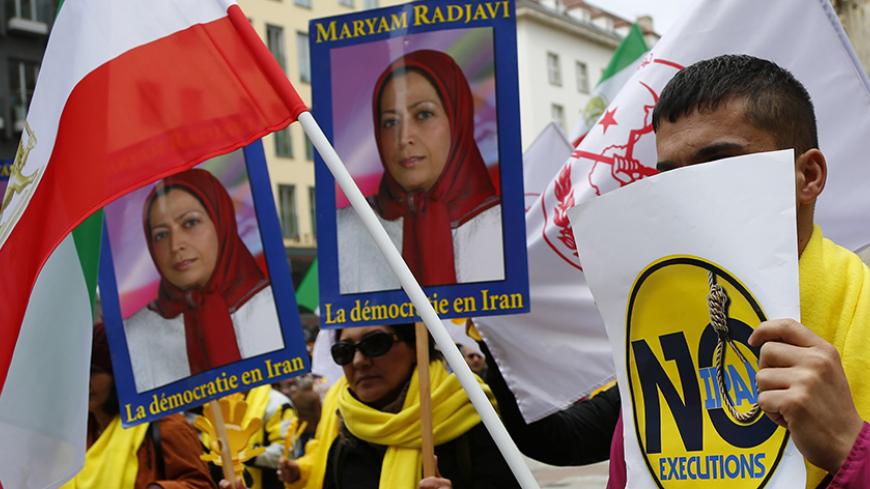 Demonstrators hold placards showing a portrait of Maryam Rajavi, president of the National Council of Resistance of Iran (NCRI), during a protest against Iran's President Hassan Rouhani in Vienna, Austria, March 30, 2016. The NCRI acts as an umbrella organization for Iranian opposition movements, among them the Mujahadeen-e-Khalq Organization. - REUTERS/Leonhard Foeger

TEHRAN, Iran — The recent abrupt cancellation of a planned visit by Iran’s President Hassan Rouhani to Austria is raising a great deal of speculation. The two-day trip, which was scheduled to take place on March 30-31, was called off the last minute by the Iranian side. It was to follow a visit by Rouhani and his delegation to Belgium, which had already been cancelled due to the recent terrorist attacks in Brussels. But why was the visit to Vienna called off?

Rouhani’s decision to cancel the trip was announced on the evening of March 29, just hours before the president’s planned departure. The Iranian government announced that “the visit by Iran’s president to Austria will take place at a more appropriate time. This decision has been reached mutually to allow for better preparation.”

Meanwhile, the spokesperson for Austrian President Heinz Fischer's office said, "The visit for March 30-31 by President Hassan Rouhani and his delegation has been postponed by the Iranian side for security reasons." The Austrian president himself also expressed regret that Rouhani had to cancel his trip and said every nation had to decide for itself about the safety and security of its head of government. Fischer added, however, that to his understanding there was no cause for security concerns. He said Austrian police had assured him that all necessary security measures had been put in place, just as they had been for previous visits by the presidents of Russia and China.

In Iran, one of the first official reactions to the cancellation of the trip came from Rouhani’s minister of health. In a note posted on his personal Telegram channel in early April, Hassan Ghazizadeh Hashemi reiterated that security concerns were the real cause for the cancellation, while criticizing media outlets that raised questions about the latter.

But what were these “security concerns”? In an interview with the semi-official ISNA news agency, Parliament Speaker Ali Larijani said the Iranian president had cancelled his visit to Austria due to a slated protest in Vienna by the Mujahadeen-e-Khalq Organization (MEK), an opposition group that is outlawed in Iran. Larijani said Austrian authorities had shown no interest in a request made by Rouhani’s security detail to revoke the license for the MEK demonstration, and so the president had called off his trip. Larijani further said Rouhani had made the right decision but that some media outlets were trying to cast a shadow of doubt and uncertainty over this. The question then is: Which media outlets are these, and which issues have they raised?

The semi-official Mehr News Agency, which has been a critic of the Rouhani administration, published an article on April 2 titled, “The untold stories of the cancellation of Rouhani’s trip: from insecurity to unease, what is the issue?” In the article, several different scenarios are put forth, some of which include the recent terrorist attacks in Brussels and the possibility of insecurity in Vienna, pro-Israeli lobbies pressuring Vienna to cancel the trip, and an earlier interview of Austria’s president by Iranian state TV in which Fischer indirectly referred to Iran not being able to join the global transaction network SWIFT. Indeed, the reference to SWIFT had led Iranian hardliners to engage in serious attacks against the Rouhani administration. The article in Mehr News ultimately concludes that Rouhani supposedly realized that such a visit would bring no achievements for him or his government and, therefore, used security concerns as an excuse to cancel the trip.

Another important question that remains to be answered is the nature of the request made by Rouhani’s security detail, which Larijani referred to. The MEK, which has been involved in numerous terrorist attacks in Iran since the 1979 Islamic Revolution, seemingly did intend to hold a rally during Rouhani’s visit. The fact of the matter is that such rallies are nothing new — the MEK has staged similar demonstrations almost every time a senior Iranian official has made a foreign trip.

Separately, in an op-ed, Hossein Dehbashi — a former media advisor of Rouhani who has turned into a critic of the administration — slammed the Iranian president’s cancellation of his trip to Austria. Dehbashi compared the situation with when Rouhani’s predecessor, Mahmoud Ahmadinejad, delivered his widely covered speech at Columbia University in 2007. Dehbashi wrote that although Ahmadinejad was aware that the Israelis and his opponents planned to turn the event into hell for him, he bravely delivered his speech and witnessed its impact. In Dehbashi’s telling, Rouhani was not as courageous as Iran’s former president in standing up to his opponents.

Whatever the reason for Rouhani’s cancellation of his trip to Austria, what further remains unclear is why he also called off a related trip to Iraq. According to previously announced plans, Rouhani was scheduled to visit Iraq in addition to Belgium and Austria. However, this visit was cancelled without any official explanation or media coverage. Perhaps the significance of a cancelled visit to Austria had overshadowed this news. Or perhaps, as Austrian officials have stated, Rouhani’s decision to also cancel his trip to Iraq shows that the reasons for aborting his trip to Vienna are unrelated to Austria.