Civilian personnel working for the Turkish military hope to achieve equal footing with their military counterparts as a nationwide conversation unfolds in the wake of the Ankara bombing. 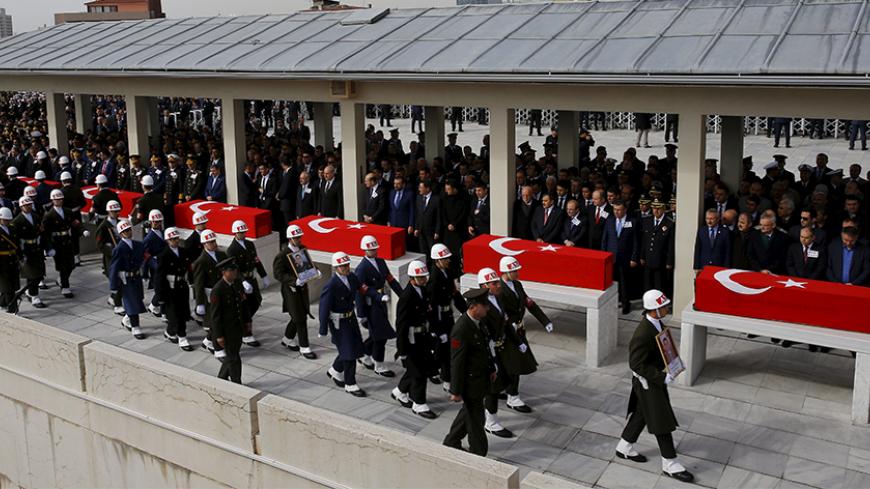 Honor guards, with the Turkish flag-draped coffins of the Ankara bombing victims in the background, march during a funeral ceremony at Kocatepe Mosque in Ankara, Feb. 19, 2016. - REUTERS/Umit Bektas

The suicide bombing in Ankara Feb. 17 is shining a spotlight on the disparity between the treatment of official military personnel and civilian contractors.

The families of the officers and NCOs who lost their lives will receive a one-time compensatory payment of about $30,000. They will be entitled to "martyrs'" salaries and two members of each family will be offered public employment. Will the families of the slain civilian workers receive the same benefits?

The initial official reaction was that the civilian victims will be given benefits equal to those of the military personnel, but many doubt whether this promise can be fulfilled under existing law.

Ali Onal, president of the Public Union for Workers in Military Workplaces (ASIM-SEN), told Al-Monitor the union will follow the issue. He said, “Sadly, there are some serious personnel problems for thousands of civilian workers. Legal amendments are needed to address these problems. Unfortunately, we are not getting the necessary support from the parliament.”

There were more than 52,000 civilian employees in 280 professions in Turkey's armed forces (TSK) and 630,000 military personnel as of February. About 20,000 of the civilians are laborers and 32,000 hold clerical and professional posts.

When the legal impediments that prevented the unionization of civilians employed in military workplaces were abolished in 2013, ASIM-SEN became a full-fledged union promoting the economic, career, social and democratic rights of civilian TSK workers.

Civilians working for the TSK say that although they are covered by the omnibus civil servants law, they are also subject to military regulations and thus cannot claim their full rights. In many places, although civilian staffers work under the same conditions as military personnel, they don’t enjoy the same rights.

Naturally, ASIM-SEN's demands create some friction between the union and the TSK high command, which functions on the principle of absolute obedience, and there are sometimes disputes. For example, Onal was not happy when union members were not allowed to attend a Feb. 27 memorial ceremony at the chief of staff headquarters for the Ankara bus bombing victims.

Civilian workers are not entitled to the same service compensation as military personnel. They can’t use military rest and recreation facilities and are not allotted military housing. They are not paid extra for overtime work and night duties. They also have serious disadvantages compared with other civil servants: Even with advanced degrees, civilian workers in the military can’t become supervisors. A civilian professional with 30 years of experience and a doctorate may have to serve under a 22-year old lieutenant.

Working for the TSK requires much self-sacrifice, especially for parents. Requirements for shift work and night duties naturally affect family order, as there is a lack of child care facilities. “There has been some recognition of this by the TSK in recent years. This pleases us, and this trend must continue,” Ozlem Isik, a ASEM-SEN official, told Al-Monitor.

The most severe and frequent grievance of civilian personnel is what they call "mobbing," the use of psychologically and even physically aggressive attitudes to intimidate workers on a regular basis. ASIM-SEN lawyers filed the first legal case alleging mobbing of a civilian TSK worker in 2013.

Most mobbing complaints come from workers required to be present at morning parades, those who are ordered to address their superiors as "my commander" or "sir" or those banned from using mobile phones while on duty.

Discipline is paramount in the TSK, which expects absolute obedience. As civilian workers have no military background, they are sometimes labeled ill-disciplined or incapable and are punished. This pressure eventually becomes a form of mobbing.

The treatment of the civilian victims of the Ankara bombing has triggered the first public debate on the rights of thousands of civilian workers. Although there have been some improvements in recent years, it is not easy to achieve cultural changes solely through parliamentary amendments in an institution like the TSK, with its rigid hierarchical structure and strict discipline.

But with the growing presence of the ASIM-SEM, civilian workers won’t give up the struggle for their rights, and winning them will also help democratize the TSK's organizational culture in the long term.