With a dysfunctional parliament unable to approve political and military appointments, the prime minister has been unilaterally filling government positions with acting officials. 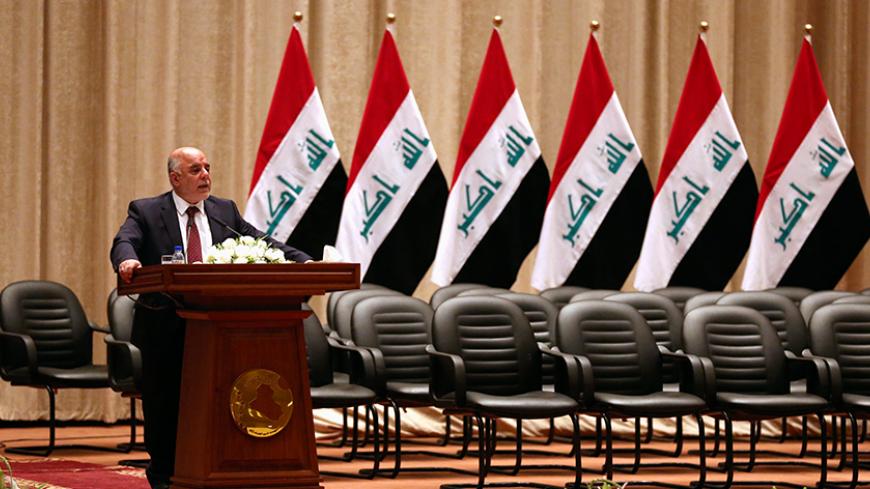 BAGHDAD — With Prime Minister Haider al-Abadi thought to be working on reforms that include the formation of a technocratic Cabinet, the issue of proxy appointments is back in the spotlight. For more than a decade, Iraqi government institutions have been run by proxy, with the prime minister appointing officials in acting capacities to lead government bodies, independent commissions and military commands because of parliament's failure to vote on candidates due to political disagreements over the distribution of positions.

In an interview with Al-Monitor, Hamdia al-Husseini, a member of the parliament's legal committee, explained, “Acting officials include undersecretaries and independent commission heads, like at the Central Bank and integrity and intelligence commissions, as well as military commanders and other senior officials. They hold over 80% of the posts at government bodies, especially at the Ministries of Defense and Interior, in addition to security bodies and other important Iraqi official institutions.”

“The problem of appointment by proxy will likely be resolved as part of the new Cabinet reforms Prime Minister Abadi is seeking to implement in addition to the formation of a technocratic Cabinet,” Husseini surmised. “It is illogical to implement political reforms and form a professional Cabinet while most undersecretaries and director generals are being appointed without parliamentary approval as stipulated by the constitution.”

Zaher Khatouni, a member of the Iraqi National Forces Alliance, spoke to Alforat News on Feb. 13 about the need “to select the new ministers on the basis of professionalism,” stressing that the issue of appointment by proxy should be settled.

In a Feb. 28 statement, Kamel al-Zaidi, a member of the State of Law Coalition, said, “[We] will force the Iraqi parliament to urge the Cabinet to settle the issue of acting officials and replace them with qualified individuals.” He explained, “The problem of appointment by proxy arose as a result of the rivalry between political parties contesting these posts.” In one example of the issue, according to the Iraqi Commission of Integrity, 3,200 director general positions have been filled by acting appointments and without regard to the law limiting their tenure to one year.

Mohsen Saadoun, a member of the parliamentary legal committee and the Kurdistan Alliance, told Al-Monitor, “The delay in resolving the problem is due to the inactivation of the parliamentary committee [to achieve national] balance, tasked with settling the issue of acting officials since 2005. But in February, the committee was able to hold several meetings, and it expects to find a final solution for the problem during March, to end the assignment of government employees by proxy by agreeing on allocating the higher ranks among the parliamentary parties that represent the Iraqi people and vote for them in parliament.” The committee had been formed during the legislature's first session in 2005 with the goal of distributing government appointments as well as military commands in accordance with the social components of the Iraqi people — Arab Shiites and Sunnis, Kurds, Christians, Turkmens and so on — and their parliamentary representation.

“The results of the general elections determine each political party’s share of government posts in a fair manner without marginalizing any party when it comes to leadership and decision-making,” Saadoun claimed. “Taking the election results into consideration does not imply sectarian or racial quotas with respect to distributing posts or adopting a technocracy, for each parliamentary bloc can nominate several qualified figures for each government post before the prime minister selects one among them.”

In regard to the larger issue, Yasin Bakri, a political science professor at Nahrain University, told Al-Monitor, “The suspension of Article 61 of the Iraqi Constitution has been intentional over the past few years, ever since the constitution was adopted in 2005 until now. The prime ministers who were in office have been trying to control all aspects of the state by overriding parliamentary powers in terms of appointing senior public officials.”

According to Article 61, the parliament must approve the appointment of the president and members of the Federal Court of Cassation, chief public prosecutor and the president of Judicial Oversight Commission, ambassadors, the army chief of staff and his assistants, division commanders and ranks above and the director of the intelligence service.

“Just as the parliament approves the appointment of state senior officials, independent commission heads and military commanders, it must also approve their dismissal; therefore, the prime minister has limited powers over the members of parliament,” Bakri said. “In the event of the prime minister appointing senior officials by proxy, as is the case now, their dismissal is also the responsibility of the prime minister. For this reason, the latter may extort and control them, in his attempt to impose a dictatorship. However, resolving the problem of acting officials by ending the prime minister’s control and monopoly over the activities of government institutions will not eradicate the sectarian and party quota system in force since 2003.”

Finding a solution to the issue of acting senior officials will not be easy. The implementation of the constitution, including the parliament's power to approve candidates for senior positions, will be colored by the sectarian quota system, like the distribution of Cabinet portfolios, despite that average Iraqis as well as elites are opposed to this type of approach.