US looks to sidestep UN on Iran missiles

Blocked at the UN Security Council, the Obama administration considers other multilateral tools. 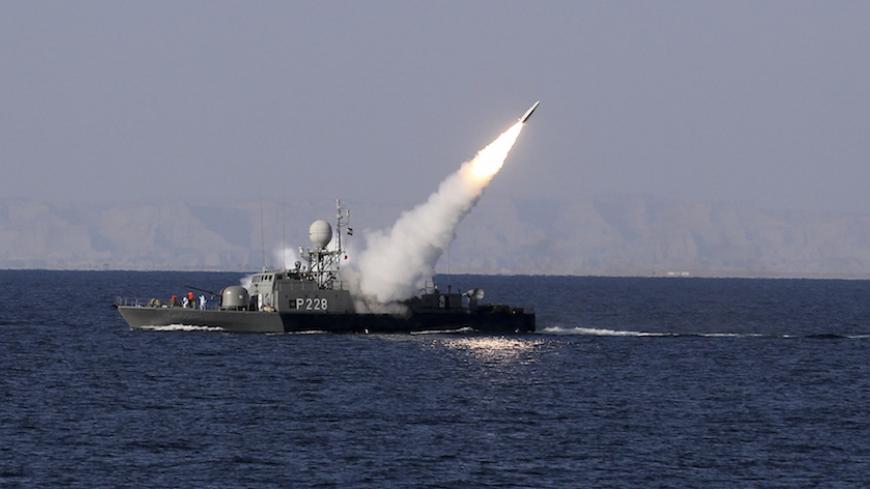 A new medium-range missile is fired from a naval ship during Velayat-90 war game on Sea of Oman near the Strait of Hormuz in southern Iran, Jan. 1, 2012. - REUTERS/Jamejamonline/Ebrahim Norouzi

With Russia blocking sanctions at the United Nations, the Obama administration is looking at other international avenues to rein in Iran’s ballistic missile program.

The White House insists it has all the unilateral authorities it needs to slap new sanctions on Iran for defying the spirit — if perhaps not the letter — of the UN Security Council resolution implementing the nuclear deal. That resolution “called upon” Iran “not to undertake any activity related to ballistic missiles designed to be capable of delivering nuclear weapons.”

Russia insists that language is not a legal prohibition, in effect ruling out more missile-related UN sanctions. But the Obama administration, eager to calm jittery lawmakers, insists it has a number of other multilateral tools outside of UN action that it can use to counter threats from Iran’s missile program.

Those tools specifically include the Proliferation Security Initiative and the Missile Technology Control Regime, an administration official told Al-Monitor. Russia is a party to both agreements, which are nonbinding but are nevertheless seen as being among the best chances to prevent Iran from further developing its missile program.

“We certainly think that using and strengthening [the two programs] would be positive for nonproliferation efforts writ large, but could also work … for preventing Iran from obtaining materials or technologies it would need to advance its missile program,” said Kelsey Davenport, the director for nonproliferation policy at the nonprofit Arms Control Association. “Especially when you look at the Middle East region as a whole, there are a lot of countries that could use assistance in strengthening their export controls and enhancing communication with other countries when there are concerns about illicit transfers.”

The Proliferation Security Initiative was launched in 2003 under President George W. Bush with the goal of increasing international cooperation in interdicting “shipments of weapons of mass destruction, their delivery systems, and related materials,” according to the Congressional Research Service (CRS). The initiative now includes 105 countries that share information on questionable shipments and cooperate on blocking suspicious flights and on boarding vessels.

The Missile Technology Control Regime, meanwhile, is a code of conduct dating to 1987 that calls on member countries to “exercise restraint when considering transfers of equipment or technology,” according to the CRS. It currently is made up of 34 members committed to establishing export control policies.

Both agreements fall largely under the purview of the State Department, which did not respond to requests about the latest efforts to boost their effectiveness. However, the official in charge of the agency’s international security and nonproliferation bureau hinted at their importance in the wake of the Iran deal during a meeting of the Proliferation Security Initiative in January.

“This meeting is particularly timely now that the Joint Comprehensive Plan of Action (JCPOA) between the EU/E3+3 and Iran has been implemented, the previous UN Security Council resolutions on Iran have been terminated, and the provisions of UN Security Council resolution 2231 regarding the transfer of nuclear-, ballistic missile-, and conventional arms-related items have been activated,” Assistant Secretary of State Tom Countryman said in his opening remarks. “However, all of us as PSI [Proliferation Security Initiative] members must remain mindful to the fact that, except in a few limited circumstances, the transfer of nuclear-, ballistic missile-, and conventional arms items remain prohibited under UNSCR 2231 unless explicitly approved by the Security Council. It is important for the PSI community to understand clearly the provisions of the JCPOA and UNSCR 2231 — whether we are suppliers, transshipment countries, financiers, or flag states — and we must remain vigilant to prohibited proliferation that has not received this advance, case-by-case approval by the Security Council.”

Topics discussed at the meeting included tactics networks use to ship sensitive materials and technologies, options for controlling proliferation financing and sharing expertise and resources to enhance interdiction capacity, according to Davenport.

“Those areas, particularly if they were targeted at known or suspected illicit transfer routes into Iran, I think certainly would play a positive role,” she said.

Davenport’s organization has argued in favor of strengthening both mechanisms in the wake of the nuclear deal. The Proliferation Security Initiative should host additional exercises and workshops in the Middle East to “help countries in the region develop tactics, techniques and procedures to enhance interdiction capacities,” according to the Arms Control Association, while the Missile Technology Control Regime could accept more than 10 new members while its control lists “could be reviewed and updated to reflect new technologies.”

A key shortcoming of both instruments is their voluntary nature and lack of a binding enforcement mechanism. However, Davenport said past successes hint at their potential to hinder Iran’s missile work.

While successes under the Proliferation Security Initiative remain shrouded in secrecy because intelligence agencies and other government bodies don’t want to give away their sources and methods, the Bush administration in 2008 made public five successful interdiction efforts, three of which concerned Iran. Meanwhile, Davenport said, Iran’s failure to pursue a solid fuel ballistic missile may be attributable to Tehran’s failure to secure a reliable source of propellant as a result, at least in part, of the Missile Technology Control Regime.