Will Riyadh cancel aid to Egypt?

Saudi Arabia might be using the promise of aid or the threat of withdrawing aid to get Egypt to toe the line politically in regard to Syria. 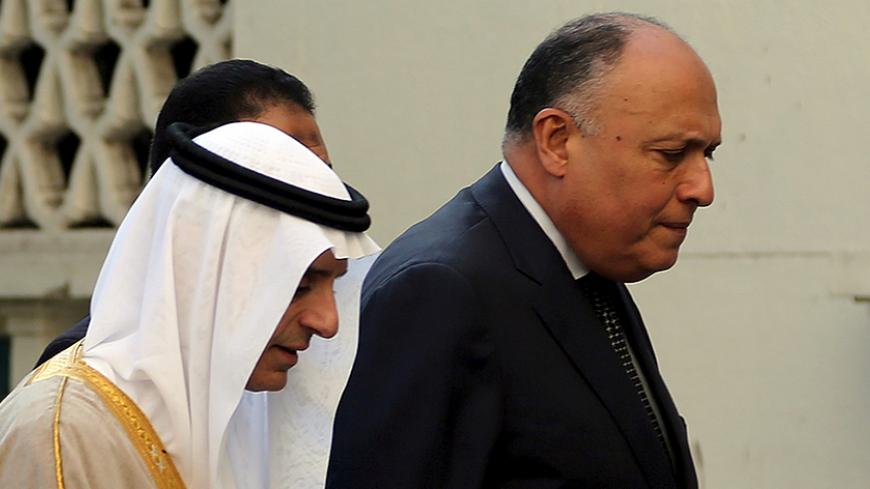 CAIRO —  Saudi Arabia announced on Feb. 8 that the kingdom, along with the United Arab Emirates (UAE), was prepared to send ground troops to Syria to fight alongside the US-led international coalition. This fanned a spark of diplomatic disagreement between Cairo and Riyadh.

Suddenly, without stating any clear justifications or setting another date, Egypt’s Prime Minister Sharif Ismail canceled his Feb. 10 visit to Saudi Arabia. The visit had been scheduled to finalize the Egyptian-Saudi Coordination Council's agreement to make 30 billion riyals ($8 billion) in investments in Egypt, as pledged by Saudi King Salman bin Abdul-Aziz Al Saud in December. The agreement included filling Egypt's oil needs for five years and supporting Saudi vessel traffic in the Suez Canal. The aid package came after the countries discussed developing military cooperation and the establishment of a joint Arab force.

An Egyptian government official told Al-Monitor on condition of anonymity, “The Egyptian-Saudi Coordination Council meeting was postponed as a result of the failure to reach a final consensus on the nature of the projects presented by Cairo and the proposed financial value to implement these projects.”

The official said the meeting hasn't been rescheduled yet, "but intensive contacts are underway to speed up agreement on investment projects before the end of March 2016." Egypt hopes to reach an agreement when Salman visits Cairo on April 4, he said.

“Cairo aims to secure its petroleum needs for five years with soft loans, an estimated quantity of 700,000 tons [5 million barrels] per year,” he said. “The government is also banking on a new Saudi investment in the capital administrative projects, the reclamation of 1.5 million acres, and in the real estate and tourism sectors.”

According to observers, the Saudi aid is now governed by several parameters related to the volatile regional situation in Yemen and Syria on the one hand and the drop in oil prices on the other.

Egyptian Foreign Minister Sameh Shoukry announced Feb. 16 that the Saudi and UAE decision to send ground troops into Syria does not fall within the scope of the Islamic Military Alliance to Fight Terrorism, the 34-member coalition Saudi Arabia launched in December. He confirmed Egypt's support for a political, not military, solution in Syria.

Both Egyptian and Saudi officials deny their disagreement will affect the strong relations between the countries. But the facts seem to indicate otherwise.

Saudi Arabia is extremely sensitive to any political position that does not match its vision on regional issues. This is reflected by the kingdom halting its planned $4 billion in aid to the Lebanese army and security forces, apparently because Lebanon disagreed with Saudi Arabia's stance on Hezbollah.

It seems Cairo still links its participation in any Arab military alliances to obtaining financial aid to improve its situation back home. This position governed Egypt's decision to become a major player in the Gulf War during the rule of former President Hosni Mubarak. According to International Monetary Fund estimates, Egypt obtained at the time $100 billion worth of Gulf aid, $10 billion of which was provided by Saudi Arabia — not to mention the Saudis' participation in canceling the nation's foreign debts.

Cairo had sent indirect letters throughout 2015 threatening to object to external military interventions. In an April speech, President Abdel Fattah al-Sisi said, “The Egyptian army is only for Egypt.” In the same month, Egyptian security forces authorized a protest in front of the Saudi Embassy in Cairo denouncing the Saudi intervention in Yemen. Egypt also received a delegation representing former Yemeni President Ali Abdullah Saleh. The kingdom thus excluded Egypt from the dialogue with the Yemeni factions before the Geneva negotiations in June.

On the Egyptian and Saudi military coordination, Khaled Okasha, a retired Egyptian military general and chairman of the National Center for Security Studies, told Al-Monitor, “Different visions among allies are normal and acceptable, and the disagreement may be resolved through the constantly open channels between Cairo and Riyadh.”

Okasha said, “The Saudi-Egyptian dispute over ground intervention in Syria does not necessarily apply to other military coordination issues." He noted that Sisi attended the recent conclusion of the Northern Thunder military maneuvers in Saudi Arabia, which confirms the continuation of military cooperation regardless of "divergent visions and positions regarding the Syrian issue.”

Observers believe Saudi Arabia's policies of coordination and alliance with Egypt primarily aim to revive the region's Sunni coalition in the face of Iran, Saudi Arabia’s No. 1 political enemy. Cairo hampers this objective, however, in light of the Egyptian-Turkish dispute.

Okasha added, “Egypt still has a fixed position toward Turkey, but this hostility may be broken if Turkey makes good initiatives. In politics there are no permanent or perpetual enemies.”

Questions remain on the table about the extent to which Saudi Arabia will use the support and aid pressure card against Egypt in return for Cairo adopting clear and explicit positions in line with the kingdom’s vision, especially with regard to the military solution of the Yemeni and Syrian crises, as well as Iranian interference in the region. Salman's agenda during his upcoming visit to Cairo early next month may bring answers to these questions.