How one Hamas leader intends to reconcile with Fatah

Hamas leader Ahmed Yousef speaks to Al-Monitor about the movement’s relations with Fatah, Iran and the international community. 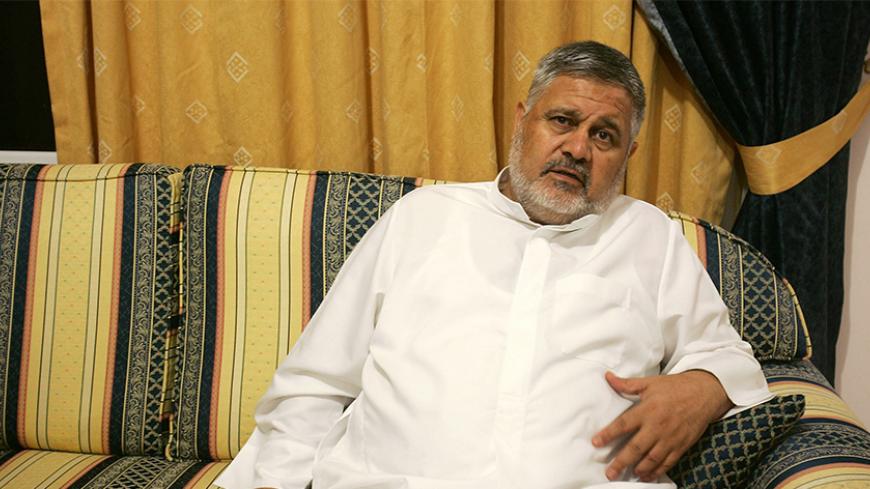 Ahmed Yousef, a former political adviser to Ismail Haniyeh of Hamas, speaks as he sits at his home in Rafah, Aug. 16, 2007.

GAZA CITY, Gaza Strip — Many, even Hamas’ political rivals, have described Ahmed Yousef as the most flexible, moderate and open of his peers.

Yousef, a former political adviser to Hamas' deputy political bureau chief in Gaza, Ismail Haniyeh, joined the Muslim Brotherhood in 1968. He is highly knowledgeable in political matters and an important figure in the history of the Palestinian cause and Islamist movements. He has published more than 28 books in Arabic and English, dealing with the Arab-Israeli conflict and the affairs of the Islamist movement in Palestine and the Arab and Muslim worlds. Notable titles include “Contemporary Islamic Thought Transformations” (1983), “The Islamic Movement within the Green Line: Current Challenges and Future Horizons” (1987) and “Future of Political Islam: American Points of View” (2001).

He also established the House of Wisdom in Gaza for consultancy and conflict resolution, and he headed its board. In the mid 1990s, he called for the establishment of a bi-national state on Palestinian soil. He rejects violence as a means to solve conflicts between Israelis and Palestinians.

Al-Monitor interviewed Yousef in his office at the House of Wisdom in Gaza City. The text of the interview follows:

Al-Monitor:  How do you view Fatah, in your capacity as a Hamas leader?

Yousef:  Fatah and Hamas are the pillars of our national project. Both enjoy widespread popularity among the Palestinian populace, representing more than 70% of the electoral base thereof. Fatah is a revolutionary movement that used to attract a great deal of support, which it now shares with Hamas. Both are essential, and neither can be excluded for the benefit of the other, unless the aim is to weaken the national project, for their joint existence on the scene guarantees the endurance and continuity of said project.

Al-Monitor:  In all of your statements, you allude to a rapprochement with Fatah, leading to criticism by some members of your movement. What is your opinion in that regard?

Yousef:  The dispute may further intensify and the rift widen between us and Fatah if we were to accuse, doubt and adopt a belligerent attitude. The split that occurred in June 2007 is the work of the devil, though a remedy can be attained. But unfortunately, belligerent attitudes emerge to exacerbate the situation whenever the voices of reason in both parties get close to prevailing. For both factions are equally responsible for the mistakes that have occurred, and I think that we must understand that we are the children of a single homeland and similar resistance movements facing the same enemy. Such methods should be discarded from our political discourse.

Al-Monitor:  It is truly a positive development when we hear, albeit infrequently, Hamas officials praising Fatah figures, in spite of the division between them. You recently completed a book about late President Yasser Arafat. Why did you choose him as a topic, and what is Hamas’ view in that regard?

No one in Hamas opposed the idea, and I asked many of its leaders to contribute to the book, to which they all agreed, among them the head of Hamas’ political bureau, Khaled Meshaal. We may disagree with Arafat politically, but we all agree [about what he represents].

Al-Monitor:  What are your thoughts concerning a rapprochement with Fatah and the end of the internal Palestinian split? Do you think it is possible to reach reconciliation soon between the two parties?

Yousef:  As Palestinians, we do not represent a unique militant experiment, for there are dozens of such national liberation experiments that have taken place in both the Arab and the Muslim worlds, the examples of which we can follow. In that regard, we must endeavor to achieve political partnership on the basis of national consensus, and a single faction must not be allowed to impose its opinion at the expense of others. In the end, we are all national and Muslim liberation factions that have differing aspirations in implementing their visions.

In Hamas, our vision is Islamic. Other factions have differing ideologies, in which we must find common ground that allows us to achieve our goals and aspirations, leading to a platform or political program to be adopted by any future government.

In addition to internal political partnership, I think that at this stage, where the world, Arab and Islamic countries are preoccupied with their own internal issues, we must depend on nonviolent methods and draw attention to our suffering while refraining from giving Israel excuses to aggress upon us and abort our national project.

Al-Monitor:  In a 2010 study that you published titled “Contemplations in Religion and Politics: Reading into the Palestinian Cause” and in which you discussed Hamas’ refusal to recognize Israel as well as its vision of the West, you said that new ideas reflected the expanded openness of Hamas toward the international community, as more realistic political aspirations were being adopted. What is your opinion about Hamas’ rapprochement with the international community? Do you have new options that differ from those currently being put forward?

Yousef:  The international community is monitoring our situation and providing us with assistance. It proposed the two-state solution, and we stated that we endorsed said solution, but perhaps differed in the implementation thereof. We cannot really discuss the issue, as the details are yet undefined.

I previously proposed a bi-national state solution, in the sense that it is a country for all of its inhabitants. I personally made the proposal in the 1990s and continue to endorse it.

When we proposed it, the international community objected, using arguments advanced by Israel claiming that we wanted to erase it from existence. Unfortunately, in the absence of an opposing discourse on our part, the world has grown convinced of that pretext. But such contentions are unacceptable, for Hamas’ position vis-a-vis Israel as a state and its refusal to recognize said state does not equate to us objecting to living alongside it, as many other countries of the word live alongside countries toward which they harbor hostilities. For not everything can be resolved with weapons and violence.

Al-Monitor:  You have criticized Hamas on numerous occasions, including its exaggeration of its resistance potential and giving Israel a pretext to attack Gaza. Is such criticism received positively among the movement’s leadership?

Yousef:  I try to convey the pulse and qualms of the street. This is the situation that we live in and everybody is open to criticism.

In my latest article, I stood against giving the occupation a pretense for aggressing against us and marketing to the West its war against us. I wanted to remove all such pretexts, and in doing so, I sometimes criticize everyone, among them Hamas, which hears our arguments. Time will lead to changes, and no one in Hamas opposes my criticism against it.

Al-Monitor:  What is your opinion of Hamas’ relationship with Iran, particularly in light of Hamas’ stance vis-a-vis the Syrian popular movement that began in March 2011 and its endorsement of said movement against the Iran-allied regime of [President] Bashar al-Assad?

Yousef:  Hamas’ relationship with Iran has historical roots that go back to the movement’s genesis in the 1980s, with Iran providing Hamas and the government in Gaza financial and logistical support.

In Syria, Hamas stood against the regime and its relationship with Iran subsequently suffered. Iran is now part of the conflict in Syria, while Hamas completely withdrew from Syria after voicing its support for the Syrian people, without fearing the consequences of said disputes.

But losing Iran is not something that we aspire to. For it is an important regional state and we want it to remain supportive of the Palestinian cause, and maintaining the dispute between us would be unwise. In this context, a healthy relationship requires both give and take.

Al-Monitor:  The situation in Gaza is catastrophic and deteriorating. In your opinion, what should Hamas do in that regard?

Yousef:  In Hamas’ view, it relinquished its rule and presented it on a silver platter to the Palestinian Authority and President Mahmoud Abbas. We reached an agreement in Doha, and Cairo before that. We stand ready to implement those agreements. But the other side, meaning the PA and Abbas, have failed to seriously deal with the situation and take steps to end the split between us.

We are ready to hand over governance of Gaza when we determine that the PA is truly prepared to exercise its functions there. Matters can only progress gradually, and no change can occur overnight. Trust and honesty are required, for we do not cling to anything except protecting the resistance and safeguarding the continuity of Hamas. We must not be asked to relinquish anything while nothing is being offered to us in return, and we hope that President Abbas is spared external pressure aimed at thwarting any rapprochement with Hamas.