British Prime Minister David Cameron is a true and committed friend of Israel, but Prime Minister Benjamin Netanyahu has still lashed out at him for daring to criticize Israeli policy in East Jerusalem. 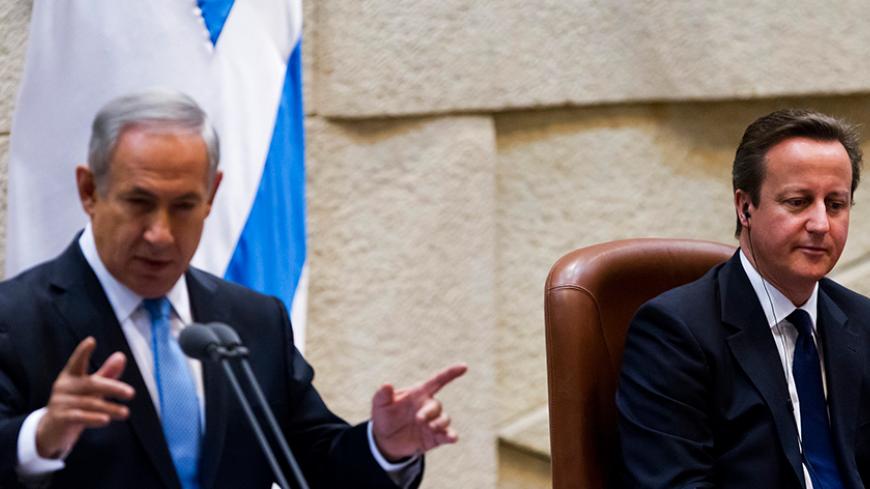 ''I am well known for being a strong friend of Israel, but I have to say the first time I visited Jerusalem and had a proper tour around that wonderful city and saw what had happened with the effective encirclement of East Jerusalem — occupied East Jerusalem — it is genuinely shocking," British Prime Minister David Cameron told parliament member Imran Hussain Feb. 24, when asked what Britain is doing to prevent the violation of human rights by Israel in the territories. Cameron immediately became the target of Israeli public relations artillery. It didn’t bother Prime Minister Benjamin Netanyahu and Jerusalem Mayor Nir Barkat that Cameron is considered Israel's true friend.

Netanyahu, instead of responding diplomatically and explaining the necessity of the checkpoints in the current round of violence, preferred to hit Cameron — who does not hesitate to confront Israel’s harshest critics — below the belt. “My friend David Cameron … seems to have forgotten a few basic facts about Jerusalem. … Only Israeli sovereignty guarantees the Arab residents of the city roads, clinics, employment and all the other trappings of normal life that their brethren do not enjoy elsewhere in the Middle East,” Netanyahu sniped.

Cameron visited Israel in March 2014 and gave a speech at the Knesset. Since the end of the mandate, no official British representative, and certainly not one at the rank of prime minister, has ever been heard saying such warm things about Israel and publicly declaring his commitment to its security from the podium of the Knesset. To put the offensive Israeli response in perspective, we should return to the main points of Cameron’s speech.

“Israel is the homeland of the Jewish people, and we will not agree to any demand that would hurt you. Israel’s place is founded in international law and in history,” said Cameron, who even addressed the boycott, divestment and sanctions movement. “Britain,” declared Cameron, “opposes boycotts, whether it is trade unions campaigning for the exclusion of Israelis or universities trying to stifle academic exchange. Delegitimizing the State of Israel is wrong; it is abhorrent and together we will defeat it,” he promised.

Just a few days before the Israeli attack on Cameron, ads were posted at London Underground stations by the BDS movement, protesting Britain’s ties with Israel. On that occasion as well, the Israeli response was hysterical. Yair Lapid, the chairman of Yesh Atid, called his friend the mayor of London, while Netanyahu called the director of the Ministry of Foreign Affairs, Dore Gold, who was in London that day, and asked him to request that the British government take down the signs immediately.

Whether it’s inspired by the attitude of “commander Netanyahu” or the prevailing sense in Israel that “the world is always against us,” the sense of offense that turns every friend into an enemy if he dares disagree with Israeli policy has become a common Israeli syndrome. The fact that Israel has few friends left in the world doesn’t make the slightest difference when it comes to its derisive reactions to good friends.

US President Barack Obama, during whose term in the White House Israel has received wide-ranging security aid, has been successfully characterized by Netanyahu in the eyes of the Israeli public as an unfriendly, bordering on hostile president. The prime minister refuses to sign on to the national security aid package that Obama has offered, totalling $4.1 billion a year, and prefers to wait for the next president on the assumption that the next would be more friendly and understanding of Israel’s needs.

Another friend, Secretary of State John Kerry — whom the government of Israel headed by Netanyahu has also successfully painted for the public as an enemy — has accurately and distressingly criticized Israel’s conduct, and in a December interview for The New Yorker magazine warned about Israel’s policy of fortification.

In their wild attack on Cameron, Netanyahu and Barkat claimed that such needful things as roads, clinics and workplaces are available to residents of East Jerusalem, and they would not find them, for instance, in Iraq or Syria. This they did even though Cameron made no argument regarding discrimination or lack of infrastructure. The prevailing worldview in Israel is that its Arab citizens (about a fifth of its total population), must be grateful every day that they do not live in Arab countries and that they benefit from the graces of this nation. In this manner, it’s customary to brush off the valid complaints of Arab citizens regarding discrimination against them and their resulting distress and exclusion.

To the heart of the matter: A 2012 report by the Association for Civil Rights in Israel showed that 84% of children in East Jerusalem were poor. An updated report published this month by the Ir Amim organization determined that the poverty rate among Arab families in Jerusalem is 3.5 times that of the Jewish population. The report also exposes the gaps in public investment between Jewish and Arab neighborhoods in Jerusalem. For instance, the budget for transportation and engineering services in 2013 stood at 654 million shekels ($167 million) allocated for western neighborhoods, compared to 62 million shekels ($15.85 million) for the city’s eastern neighborhoods.

This report, which was based on open and official databases, exposes enormous inequalities in infrastructure, education, employment, health and more between western and eastern Jerusalem neighborhoods. So in their rush to claim the British prime minister was forgetting some important facts about Jerusalem, Barkat and Netanyahu have glossed over the state of residents of East Jerusalem before they went on the offensive against their friend from 10 Downing St.