The EatWith dining concept offers both tourists and local Israelis an intimate culinary experience in a variety of private homes. 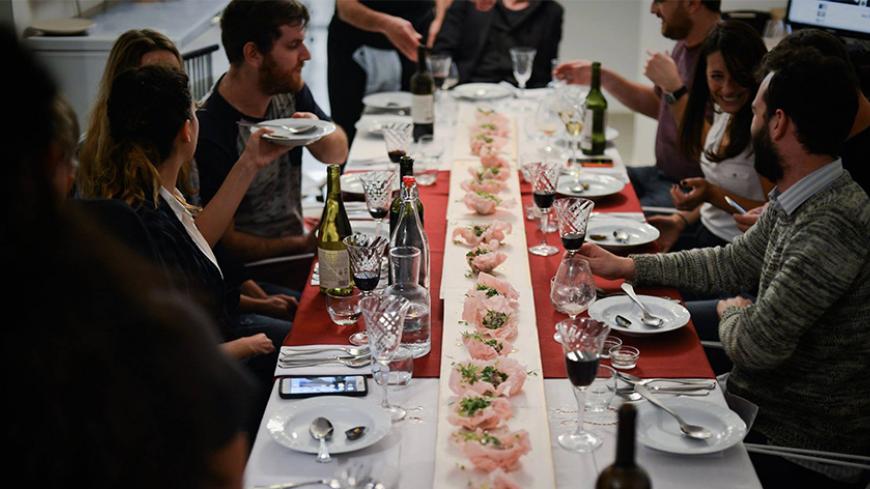 People join together through the venture EatWith to try new dishes and meet others, Jan. 4, 2016. - FACEBOOK/EatWith

The most interesting culinary experience in Tel Aviv — a city celebrated for the varied entertainment it offers, its nightlife and its culinary delights — may be found not necessarily at the high-end restaurants the city is known for, but rather in the private homes of local residents. This experience has been made possible by an Internet venture called EatWith. Founded about three years ago, it has since expanded to Jerusalem, Haifa and dozens of other cities in Israel and around the world.

The venture's website presents some 50 amateur Israeli chefs who offer people a unique, authentic and social culinary experience in their own private homes. Each of the chefs describes his special menu of the day, specifying the cost per guest and the maximum number of diners he proposes to host. Prospective guests can book a seat at the chef’s table and pay in advance through the website (which collects a commission for each diner), so that there are no bills at the end of the meal and no need to tip a waiter. Beverages (including wine) are, needless to say, included as part of the menu.

Another significant aspect of the experience besides visiting the home of an unfamiliar local is the opportunity to socialize with other foreigners in a dining event that brings people together.

"People get to know new people in these culinary events. New collaborations are created and couples are formed. In fact, two Barcelona hosts got married after meeting at an event we organized," Noam Klinger, the general manager of EatWith Israel, told Al-Monitor.

The venture was conceived and co-founded by Israeli entrepreneur Guy Michlin and his friend Shemer Schwartz. After succeeding beyond expectations in Israel, the founders of the start-up raised capital from investors, settled in the United States and went on to spread their vision throughout the world. More than 600 hosts based in some 160 cities in 35 countries are currently taking part.

"When someone opens his home to others, inviting them to dine at his table, he offers them a memorable experience that by far exceeds the experience of dining out in a restaurant. You can connect with your hosts and get to know another culture," explains Klinger. "In the world of social networks, you are given the opportunity to go out, get yourself an invitation to the chef's home and enter his kitchen. People are always looking for the new thing, for the authentic experience, for the more personal touch."

The venture's founders initially expected that tourists would be exposed firsthand to the Israeli scene and popular culture. However, to their surprise, it is the Israelis themselves who are looking for novel experiences, and they've ended up accounting for the majority of EatWith diners in the country. Klinger notes, "The Israeli public is remarkably open. Israelis find it easy to socialize with unfamiliar diners at the table, and they seem to have no reservations about entering the home of a complete stranger."

One of the experiences offered on the EatWith website is an authentic Arab meal at the home of Alia Dasouqi, a mother of four and grandmother of eight who hosts up to 20 diners at her home in Jaffa and also offers Arab cooking workshops. She told Al-Monitor, "I teach how to prepare synia, which is minced meat with tahini; chopped salad; maklubeh [a meat and rice casserole]; and more. I also serve moussaka, a traditional dish of rice with fish, chraime [fish in spicy tomato sauce] and all sorts of salads."

Dasouqi's participation with EatWith has not been a simple matter for her. Cooking delicious meals is one thing, but for a traditional Muslim woman to host strangers at home is quite another matter.

"It is not acceptable here," she says. "At first, the response of the environment was quite negative, and I chose to speak as little as possible about it. But it cannot work if there is no support at home." She notes that with time her husband and children have become supportive of the venture and that her husband is now present at almost every dining event she hosts. "You have to love to entertain," she emphasizes, "to tell stories, sitting at the table for two hours, taking your time. My husband likes to sit with the guests and tell them about Jaffa." She says no Arabs are booking diners with them, only Israeli Jews and tourists. Meal prices on the EatWith website generally range from 100 to 300 shekels per person (between $25 and $75). At Dasouqi's house, a rich, delicious meal, including a sweet dessert and tea, is offered for a mere 132 shekels per person ($33).

More expensive meals are offered by host Ofir Kaminkovski, who is based in southern Tel Aviv. His guests are for the most part groups of friends. Putting together a menu is nothing less than a philosophical matter, as far as he is concerned. He seeks to give his guests a novel experience while meeting the rigorous requirements for hosts.

"I try to serve traditional Jewish dishes with a fresh interpretation of my own, or flavor trendy foods with the unique Tel Aviv taste," he told Al-Monitor. One of his innovative dishes he takes pride in is freekeh. "It is made from smoked wheat that I order specially from Nablus, and which I use to prepare risotto," he says.

Cooking and hosting provide a source of living for Kaminkovski. He sees it is as a magic solution, enabled by the cooperative economy model, for would-be professional chefs who lack the initial capital needed to open a restaurant.

The EatWith venture offers a way to show to the world the beautiful side of Israel and its people. In a country where the notion that "the whole world is against us" is widely shared by the public, "public diplomacy" ventures like this one could win Israel praise and appreciation. Yuval Zlinkovsky from the agricultural community of Beit Yehoshua, located in the central Sharon coastal plain of Israel, has taken this concept a step further. Zlinkovsky and his wife Rona initiated a guided tour of their own home and community, designed to let tourists see country life in Israel the way it is really lived.

"My wife and I, we are both tour guides," he told Al-Monitor. "We have realized that tourists visiting the country get to see a lot of archaeological, historical and religious sites, but hardly if ever experience Israel on the personal level — the real spirit of Israel. We thus began to invite the tourists in our guided tours to visit us at home. And it proved to be an unforgettable experience for them. I told a travel agent I know that we were playing with the idea of turning it into a business, and he started sending me guests. And it has worked!"

To date, the two have hosted delegations of Chinese economists and businessmen wishing to attend the Friday night Kiddush ritual, groups of priests and Christian scholars who love and support Israel and families with children who have taken the Zionist tour devised by the Zlinkovskys.

"I tell them the story of my grandfather and grandmother, who founded Beit Yehoshua as a kibbutz — a collective agricultural community — back in 1938. And since the community has changed shape and eventually become a moshav — another type of cooperative agricultural community — I explain the difference between the two communal frameworks. I also take my guests to the farm, where we grow organic crops from which we prepare meals for our visitors."

"I present the Israeli spirit and the life we are leading here as they really are. Foreigners see Israel in a different light, unlike the way we, its citizens, see the country. And this is my reward as a host. I get to experience the country through the eyes of my guests, the tourists," Zlinkovsky said.