Turkey takes a hit from the Russian hammer

Moscow is bringing its hammer down on Ankara following Turkey’s downing of a Russian warplane late last month, crushing Erdogan’s aspirations for autonomy from the West in foreign and security policy. 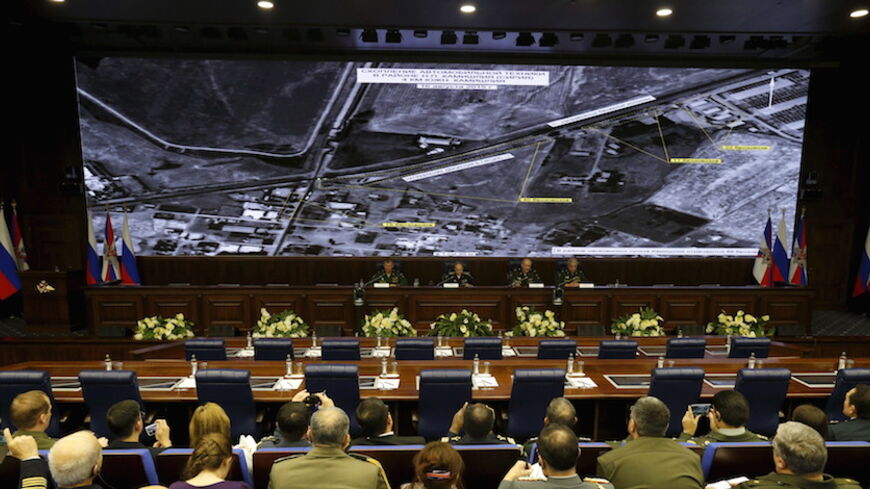 Defence ministry officials sit under screens with satellite images on display during a briefing in Moscow, Russia, Dec. 2, 2015. Russia's Defense ministry said it had proof that Turkish President Recep Tayyip Erdogan and his family were benefiting from the illegal smuggling of oil from Islamic State-held territory in Syria and Iraq. - REUTERS/Sergei Karpukhin

The conflict between Russia and Turkey that was sparked by Turkey’s downing of a Russian fighter jet on Nov. 24 is too serious to be treated in any sense of sarcasm and with emotional outbursts.

On Dec. 3, delivering his state of the nation address, Vladimir Putin voiced his anger and accused his Turkish counterpart Recep Tayyip Erdogan and the Turkish leadership.

"Allah only knows, I suppose, why they did it. And probably, Allah has decided to punish the ruling clique in Turkey by taking their mind and reason,” Putin said.

Yet it seems that he did not want to leave the “punishment” to Allah. He implied that Russia will take it on.

“But, if they expected a nervous or hysterical reaction from us, if they wanted to see us become a danger to ourselves as much as to the world, they won’t get it. … We are not going to rattle the sabre. But, if someone thinks they can commit a heinous war crime, kill our people and get away with it, suffering nothing but a ban on tomato imports, or a few restrictions in construction or other industries, they’re delusional. We’ll remind them of what they did, more than once. They’ll regret it. We know what to do,” the Russian leader said in a menacing tone.

The Russian autocrat implied unequivocally that the escalation between Russia and Turkey will not be confined to Moscow’s economic sanctions or trade embargo imposed upon Turkey. Short of a war, it could be in any form that will increase tensions in an already volatile geopolitical arena. It might prove to be difficult to prevent it from reaching undesirable and unintended consequences.

It is perhaps harboring the most serious seeds of conflict between the West and a resurgent Russia in the post-Cold War period.

In irate Russian public reaction against Turkey, relatively sober analyses rarely find their way to the Russian press. The following lines from a Moscow Times article reflect such a rarity:

“Putin should think thrice before striking once. The chances of his strategy becoming clear in the end are great and this would anger Ankara and worry the West. Besides, Turkey is no soft target, Erdogan doubly so. The irony is that Turkey is in many ways similar to Russia, from its revisionist plans and the aggressiveness of its intelligence agencies, to the character of its ambitious autocrat-presidents. It may lack the excitement of a war in the shadows, but ultimately Putin would be best served sticking to the humdrum world of the boycott and the diplomatic rebuke.”

The psychological war seemed to be an important component of Russia’s escalation of the conflict with Turkey. In this, the Russian Defense Ministry also took part and alleged that Turkey and its president’s family are involved in illicit oil trafficking with the Islamic State (IS). Russia’s defense ministry had called journalists to a briefing at its command center on Dec. 2 to show slides and satellite imagery allegedly depicting proof that Turkey was profiting from the trade in IS oil.

“A unified team of bandits and Turkish elites operates in the region to steal oil from their neighbors [Iraq and Syria],” Deputy Defense Minister Anatoly Antonov said.

President Erdogan was quick to retort. From Qatar, he dismissed the Russian accusations, labeling them as “slander.”

Earlier, when Putin made similar allegations, Erdogan had promised “to vacate his post of Turkey’s presidency if the claims are substantiated by concrete evidence.”

It was bizarre that Erdogan, who was venomous and furious at such claims when put forward domestically, had never pronounced the word “resignation,” but whenever such a claim is voiced by Putin, he could bet on his head.

Prime Minister Ahmet Davutoglu, on his way to Azerbaijan, recalled the Soviet era of Russia, and said, "Nobody attaches any value to the lies of this Soviet-style propaganda machine,"

As a matter of fact, Turkey’s American friends were not eager to buy the Russian allegations. Spokesmen from the US Department of Defense and Department of State rejected the allegations put forward by the deputy defense minister of Russia.

Since Nov. 24, US President Barack Obama has said that Turkey has the right to self-defense. He has pressed Russia to hit IS targets in Syria rather than trying to shore up the regime of Bashar al-Assad. He also sent clear signals that the United States has no intentions to let Turkey down against an increasingly nervous Russia.

However, as “there is no free lunch” in Washington, the American support to Turkey could only come against Russia if Turkey remains in line with the rest of its NATO allies and the United States in the fight against IS.

Turkey is widely believed to have dragged its feet in fighting with its coalition partners against IS and has, most of the time, not seen eye to eye with its Western allies in its Syria policy.

Ash Carter, the US Secretary of Defense, in a tacitly critical tone, said recently that Turkey should do more in its capacity in the fight against IS. “France has been galvanized by the attacks in its capital, Britain is debating expanded airstrikes, Italy has made important contributions in Iraq, and Germany is making more contributions,” he noted. “All countries, including the United States, must do more. Turkey must do more to control its border.”

Ottoman Turkey, the predecessor of the Republic of Turkey, had a reputation of perennial confrontation with its mighty neighbor Russia. Both empires fought around 13 wars between the 17th and 20th centuries. Apart from the Crimean War of 1853-1856 that was fought in alliance with Great Britain and France, the Ottomans never won a war against the Russians.

Turkey’s fate in the 20th century was also sealed through its relations with Russia. Its entry to World War I, which brought the end of the Ottoman Empire, was prompted by the bombardment of the Russian Black Sea ports by the two German warships that had taken refuge in Bosphorus and then joined the Ottoman navy. The aftermath of World War II saw the threats of Stalin that led to Turkey’s application to NATO with Western shelter for its survival.

The latest conflict with Russia deprives Erdogan of the autonomy in foreign and security policy he was seeking against Turkey’s Western allies.

In 2014, Erdogan had gone the extra mile during the G-20 summit at St. Petersburg and had asked Putin in their joint press conference, “Why don’t you let us in to the Shanghai Group, so we could be liberated from our ties to the European Union?”

There were enough signs that he had wanted to emerge as the leader and spokesman of the Islamic world, a position that would not be compatible by being a faithful and regular member of the West.

Downing the Russian fighter jet put such ambitious objectives of Erdogan in jeopardy, if not made them impossible to realize.

Turkey once again finds itself under the Russian hammer while, this time, resting on the Western anvil.

Russian allegations of Turkish leadership’s transactions with IS will continue. The rejection of Turkey’s Western partners and primarily of Washington will have credence only if Erdogan contributes to the anti-IS fight much more than he has done and also if he toes the line with the Western coalition partners on many fields.

Such a trajectory, most probably, was not what Erdogan had envisaged in his term as Turkey’s president.