The rapid rise and fall of Turkey’s pro-Kurdish party

Selahattin Demirtas, who led the Peoples’ Democratic Party to electoral success in Turkish politics, is now presiding over its downfall. 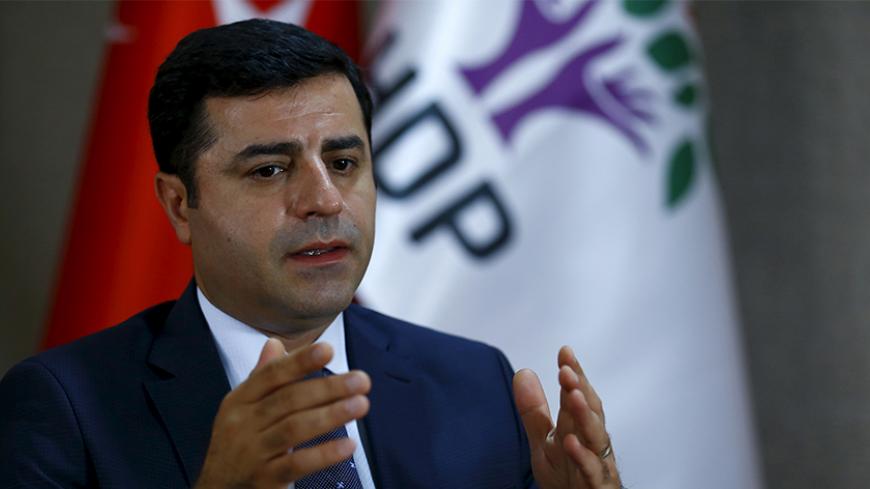 Half a year ago, the Peoples’ Democratic Party (HDP) spearheaded by Selahattin Demirtas, its young, charismatic leader, was the rising star in Turkish politics. The party, with its roots in the violent Kurdish political movement dominated by the armed and illegal Kurdistan Workers Party (PKK), had recast itself as a left-liberal, inclusive peacenik movement and a bulwark against President Recep Tayyip Erdogan’s growing authoritarianism. As a result, it emerged from the June 7 general elections with some 13.1% of the vote, doubling its usual mandate. Since then, however, the HDP’s meteoric rise has been reversed by a meteoric fall.

In the Nov. 1 snap elections, the HDP vote declined to 10.8%, resulting in the party losing 21 of the 80 parliamentary seats it had won just five months earlier. More recently, prominent voices in the mainstream, secular-liberal media who had supported Demirtas, or at least seemed sympathetic to his cause, began to oppose him and his party. Many political commentators believe the HDP “squandered” the opportunity it had created earlier in the year and will never regain it.

There is a clear and simple reason for this: In the wake of the June elections, the sluggish, yet still effective “peace process” remained ongoing between the government and the PKK. In June, however, the process collapsed, and the three-decade-old armed conflict resumed, with PKK attacks on security forces and counterterrorism responses by the government. Soon thereafter, the PKK initiated a strategy of creating “autonomous” zones in certain Kurdish towns, leading to urban warfare between its forces and government troops. The result has been a mini civil war in which more than 150 Turkish soldiers and 180 PKK fighters have died. Civilians caught in the crossfire have suffered the worst, sustaining more than 260 casualties and 750 injured, according to the Human Rights Association.

Why did the peace process fail and Turkey descend into bloodshed? Naturally, the PKK blames the government, and the government blames the PKK. I have argued mutual​ responsibility in addition to the toxic effects of the Syrian civil war spilling into Turkey. The conflict is not a war between Turkey and “the Kurds” — as often incorrectly asserted in Western media — but between Turkey and the PKK. In fact, Iraqi Kurdistan and its traditionalist leader, Massoud Barzani, find themselves closer to Ankara in this conflict than to the Marxist and “arrogant” PKK.

In any case, the collapse of the peace process has been a major calamity for Turkey, and the HDP could have played a helpful role by calling for peace and criticizing the violence on both sides. Instead, the party chose to fully ally itself with the PKK, legitimize its violence and even advocate its maximalist goal of an independent Kurdistan. That is why the HDP quickly lost its charm beyond its traditional ethno-political base.

Demirtas had orchestrated the HDP’s rise, and he also captained its fall through a series of blunders. First, he visited Moscow on Dec. 23 to meet with Russian Foreign Minister Sergey Lavrov and backed the Kremlin's position surrounding the Nov. 24 downing of a Russian warplane in Turkish airspace. At a time when Turkish-Russian relations were extremely tense, this love affair in Moscow was naturally perceived and slammed by the Turkish government as “treason.”

Meanwhile, also in December, Demirtas had defended the trenches dug by PKK militants in Kurdish areas and the organization's strategy of establishing “autonomy” by force. Kurds, of course, have the political right to campaign for autonomy, but fighting for it unilaterally with arms and booby-trapped barricades is something else. As noted by none other than the maverick HDP deputy Altan Tan, most Kurds do not approve of the violent campaign to establish autonomy in their name, which simply means PKK rule.

Demirtas spoke again, in Diyarbakir on Dec. 27, at the Democratic Society Congress, a Kurdish nationalist platform. He further defended the PKK trenches and called on “our people,” i.e., the Kurds, to support them. “This resistance will end with victory,” he vowed, adding that victory could well mean “Kurds having their own independent state.” His remarks, which seemed to herald an endless armed struggle until the carving of an independent Kurdistan from Turkey, sent shock waves not only through government supporters, but some liberals as well who had viewed the HDP as a political bulwark against the government. One such voice, Ahmet Hakan Coskun, a popular pundit from the daily Hurriyet, wrote of having been “fooled” by the HDP.

The official reaction from the government condemned Demirtas for “treason,” and the judiciary launched an “investigation” into the “terrorist” and “separatist” remarks by the Kurdish politician. It will be a total disaster if the investigation ends in stripping Demirtas of legal immunity and jailing him, as happened to several Kurdish deputies in the 1990s. It would mean Turkey forgetting about reforms on the Kurdish front and reverting to “Old Turkey's” authoritarianism, which will only intensify the armed conflict.

Demirtas and other HDP politicians should be able to voice their views without being threatened by the judiciary. Otherwise, the already dim hope for dragging the “Kurdish question” from armed violence into peaceful politics will be further diminished. Demirtas and his comrades must recognize the harm they have inflicted on their own political project by proving to be nothing more than the political mouthpiece of the PKK. It is likely that they will pay for this in the next elections by losing the votes of many liberal, left-wing Turks along with war-weary Kurds who just want a peaceful life, free from guns, bombs and barricades.