The PKK takes full advantage of children it recruits as "child terrorists" in Turkey, pushing them to the front lines and using their arrests and deaths to stir up sympathy. 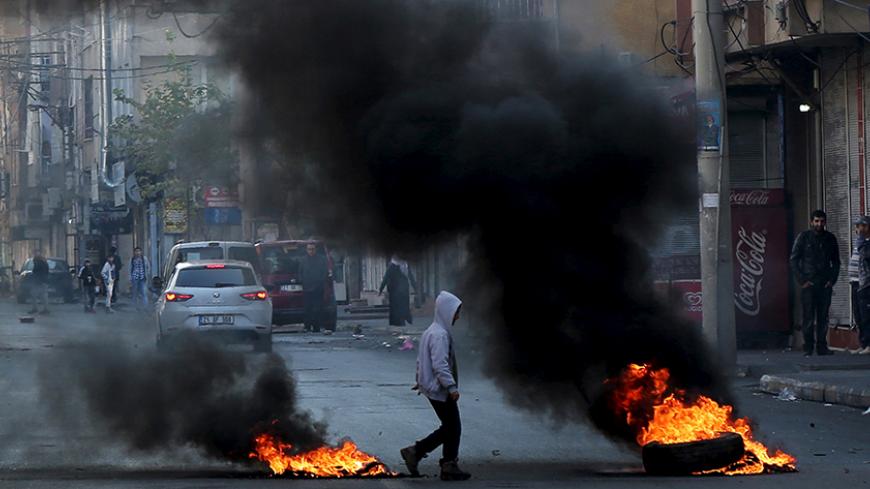 A boy walks past burning tires during a protest against the curfew in Sur district, in the southeastern city of Diyarbakir, Turkey, Dec. 14, 2015. - REUTERS/Sertac Kayar

These numbers could rise even higher this year, as the Kurdistan Workers Party (PKK) recruits children for its fight against security forces. The battles have been escalating since July.

Minors under the age of 18 made up 29.4% (22.8 million) of Turkey’s population of nearly 77.7 million as of December 2014, according to TUIK. In the predominantly Kurdish southeast, the rate was even higher — about 50% — meaning that one of every two people is a child.

In addition to those convicted, there are tens of thousands of minors being held in penal institutions under supervision or arrest, a criminal lawyer who wished to remain anonymous told Al-Monitor.

Turkish law defines minors as “individuals who have not turned 18,” while Article 31 of the Turkish Penal Code divides them into three groups in terms of criminal liability. Children who are younger than 12 when they commit an offense are exempt from liability. With children aged 12-14, officials consider an offender's capacity to understand the crime and control his or her behavior. Minors in the third group — those who have turned 15 — are considered to have criminal liability but are subject to a policy of reduced penalties.

Yet when it comes to “terror offenses,” minors are not that lucky. Under Article 2 of the stern Anti-Terror Law, those who are not members of terrorist organizations but commit offenses on their behalf are equally deemed to be “terror offenders.” The law does not distinguish between adults and minors regarding these offenses. In other words, a person who does not officially belong to a terrorist organization but is caught perpetrating an act of terror is automatically arrested as a terror offender, regardless of whether he or she is a minor or an adult.

The same lawyer told Al-Monitor that Kurdish minors aged 12-17 make up the vast majority of suspects who have been temporarily detained or arrested pending trial for terror offenses since the clashes between the security forces and the PKK resumed in the southeast in July. Most of them, the lawyer said, belong to the 15-17 age group. It follows that the same age group will make up the majority of Kurds being arrested and put on trial for “terror offenses” in a recent operation that security forces launched to overcome resistance in six urban centers in the southeast. The operation began Dec. 17 and is likely to continue for at least 10 more days.

To determine the criminal liability of these minors, called "child terrorists" in Turkey, a meticulous investigation is required. However, in conflict zones, where the abnormal has become the norm, escalating clashes mean local security forces and the judiciary lack both the means and the time to conduct such investigations. When it comes to terrorism, the need to protect minors, especially those who have been “dragged into crime,” is inevitably reduced to secondary importance.

And what is the logic leading the PKK to push untrained and inexperienced minors to the forefront of the clashes? To start with, these children are residents of the cities and neighborhoods where the clashes take place. By using these minors, the PKK is able to turn local sentiment against the security forces.

Similarly, the deaths and funerals of the minors are instrumental in keeping popular pro-PKK mobilization alive.

Furthermore, when most of the PKK’s experienced fighters are deployed in Syria, using minors in urban clashes in the southeast allows the PKK to wage the conflict in Turkey in a manner that is less costly, less risky and more efficient.

Finally, once these children have criminal records, the PKK is able to tear them away from society and recruit them at a relatively low cost.

The PKK nowadays is creating “urban guerrilla” units, combining experienced “staffer terrorists” and “accidental child terrorists.” The children take to the streets as casually as they would to a neighborhood soccer match — perhaps out of curiosity and youthful excitement, peer pressure and/or ideological convictions.

The Turkish General Staff said Dec. 17 that 69 terrorists had been killed in operations launched by army troops in the southeast. How many of those killed were staffers and how many were accidental child terrorists is unknown. Yet one thing is clear: The more the urban clashes intensify, the more they amplify the problem of child terrorists facing Turkey’s security forces and judiciary.

Judging by their actions, decision-makers in Ankara seem concerned mainly with the “terrorist” aspect of the problem, ignoring the “child” aspect. And this perfectly serves the PKK’s aim to enlist popular support in neighborhoods and towns through the deaths and arrests of the local youngsters it drives to the forefront of the unrest. Regardless of whether the child terrorists are apprehended or killed, the PKK wins in both cases.