Will Qatar's investment in ancient pyramids bring tourists to Sudan?

With funding from Qatar, archaeologists from around the world are gathering in Sudan to excavate the country's forgotten pyramids. 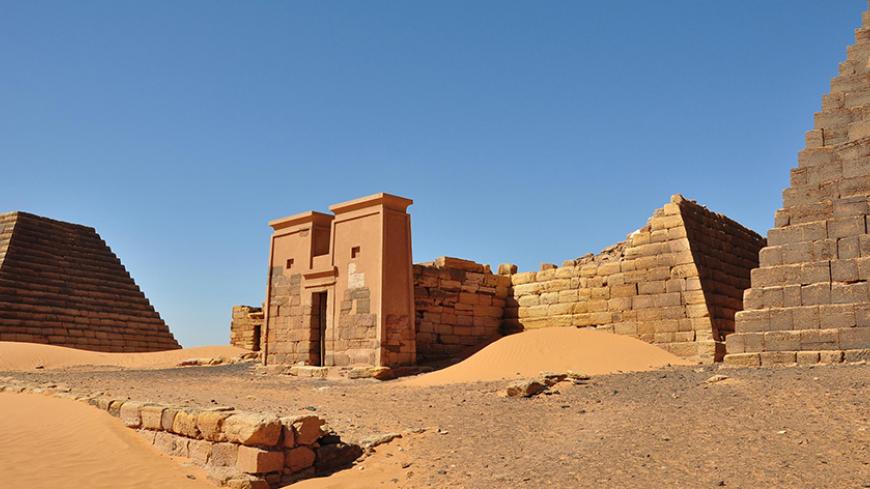 Among the pyramids of Meroe is the temple of Kandake Amanishakheto, a Nubian queen regent who is thought to have reigned from 10 B.C. to A.D. 1, Feb. 22, 2010. - Wikimedia Commons

BEJRAWIYA, Sudan — The remains of the heartland of the ancient Meroitic kingdom (circa eighth century B.C. to the fourth century) are scattered across a string of villages collectively known as Bejrawiya, 250 kilometers (155 miles) north of Sudan’s capital, Khartoum. While pyramids are synonymous with Egypt, this sandy part of Sudan is also a lesser known home to many of these remarkable structures.

The Meroitic civilization got its name from the seat of its ruler, Meroe Royal City, to the east of which lie the royal burial grounds. Three sets of pyramids dominate the landscape here: the northern and southern pyramids, constructed for royal internments, and the western pyramids for nobles and elites. These structures have long drawn attention from scholars and travelers, and several of them today bear the marks of destructive European treasure-seeking. But they have been largely abandoned for the past century. The last archaeologists to carry out excavations at the site were American George Reisner and his Sudanese colleague Saeed Ahmed in the early 1900s.

Enter Qatar Museums. Since late 2013, it has sponsored the ambitious Nubian Archaeological Development Organization (NADO), with 39 archaeological projects overseen by the Qatar-Sudan Archaeological Project (QSAP). Each of these projects has received a share of $135 million — an unprecedented amount of funding — to conduct research over a five-year period. This year, QSAP launched its 40th project, the Qatari Mission for the Pyramids of Sudan (QMPS). Now, a multinational team is working at the pyramids of Bejrawiya, a United Nations Education Science and Cultural Organization (UNESCO) World Heritage Site and the most famous archaeological monuments in Sudan.

Under the co-direction of Mahmoud Suliman Bashir and Alexandra Riedel, QMPS has so far conducted nonpenetrative work, such as geophysics, gradiometry, magnetometry and surveying, and is on the cusp of conducting test excavations to discover new features in this ancient landscape. Of particular importance is the work the archaeologists are carrying out in Pyramid 9, which belonged to first-century B.C. King Aqrakamani. While all the pyramids' antiquities were looted, it seems that the European antiquarians who visited the pyramids in the 1800s were unaware of the existence of the subterranean grave shafts, which extend from the pyramid some meters to the east. Unlike the famous Giza Pyramids in Egypt, it is these shafts that lead to the burial chamber; the pyramid superstructures themselves were simply filled with rubble. By the early 1900s, however, when Reisner conducted his seminal fieldwork, he knew of and even used the burial shafts to dump surplus excavated material. As truncated material, this spoil can no longer be used to create a chronology via analysis of stratified layers. However, any organic material found here can be used to give an accurate date for the grave in question.

Pawel Wolf, a consulting archaeological expert from the German Archaeological Institute, told Al-Monitor that the work of QMPS will for the first time reveal an absolute date for Meroitic burials, “allowing key chronological questions to be answered.” Furthermore, considering the likely date for King Aqrakamani’s reign, the material may also shed light on the wars between the Meroites and the Roman rulers of Egypt, who repeatedly sought to push south but never succeeded in gaining control of the harsh terrain that now makes up Sudan.

The idea to fund archaeological teams in Sudan, thus jumpstarting work of this scale and importance, was first brought up by Sheikh Hassan Al Thani, the vice president of Qatar Museums. But why would the Gulf Arab sheikhdom initiate such an enterprise, especially as there had been no excavations at the site for almost a century?

Salaheldin M. Ahmed, general coordinator of QSAP and QMPS, told Al-Monitor, “The [Qataris like to] promote museums. They promote art in general … and I think most of it is a true motivation to promote culture.” Indeed, archaeological investigation is only one of the aims of QMPS; conservation, site management, and tourism and development are other key features of the project. Pyramid 9 is therefore of further importance to these aims, as Reisner’s records show that it houses well-preserved painted reliefs and is impressive in its dimensions: The grave shaft is 35 meters long, 10 meters deep and 4 meters broad, making it one of the deepest burials in the cemetery. These unique attributes have encouraged QMPS to present the grave shaft to the public and allow tourists to enter the burial chamber. Alongside work done by Friedrich W. Hinkel from 1975 to 2005, who restored and rebuilt a number of damaged pyramid superstructures and their relief-laden chapels, this will significantly enhance the touristic experience and improve understanding of Meroitic funerary architecture. Ahmed told Al-Monitor that “the plan is to present the Meroitic civilization to the world … the pyramid fields, the southern, the northern and the western, and also Meroe.”

The first task is to address a number of ecological, climatic and man-made factors that have led to the buildup of several major sand dunes in the pyramid fields over the past decades. While, for some, these dunes add a certain mystic to the site, they are hugely destructive to the integrity of the structures — which are made of friable Nubian sandstone — and to their unique relief decoration. Site presentation is a key component of attracting both domestic and international tourism, and QMPS’ immediate aim is to clear the northern cemetery of sand to facilitate the movement of tourists across the site.

As the project develops, the QMPS team is simultaneously creating a working model to be used as a framework elsewhere. Indeed, the team’s remit extends to all other pyramid sites in Sudan: Gebel Barkal (Sudan’s second UNESCO World Heritage Site), Kurru and Nuri — all of which in fact predate the Bejrawiya pyramids. Ahmed told Al-Monitor, “Our ambition is to create, with Meroe Royal City, an example of a site that millions of tourists around the world will dream of coming to visit.”

Sudan’s rich cultural heritage deserves this level of attention, and the rural communities surrounding the pyramids are in dire need of the hard currency that tourists bring. In comparison with its northern neighbor Egypt, which over 10 million foreign tourists are expected to visit this year, Sudan’s tourism numbers have been consistently low. The World Travel & Tourism Council projects that only 912,000 international tourists will visit the country this year — not nearly enough for tourism to benefit local communities in a transformational manner. Bashir, co-director of QMPS, told Al-Monitor, “We want to involve the local community in our management plan … so they will benefit from the site.” This approach seems to have had at least some effect. Fadiyya Ahmed, a souvenir seller who has worked near the pyramids for over 10 years, told Al-Monitor that it is only now that she feels confident about her future. “I remember when Hinkel worked here ... we were excited because of his work. God willing, this new project will bring benefit as tourists will visit from different countries to see the history of Sudan.”