What suspending security coordination with Israel would mean for the PLO

PLO Executive Committee member Hanna Amireh predicts that the Palestinian National Council will not be able to convene in the future if the Palestinian leadership decides to suspend security cooperation with Israel. 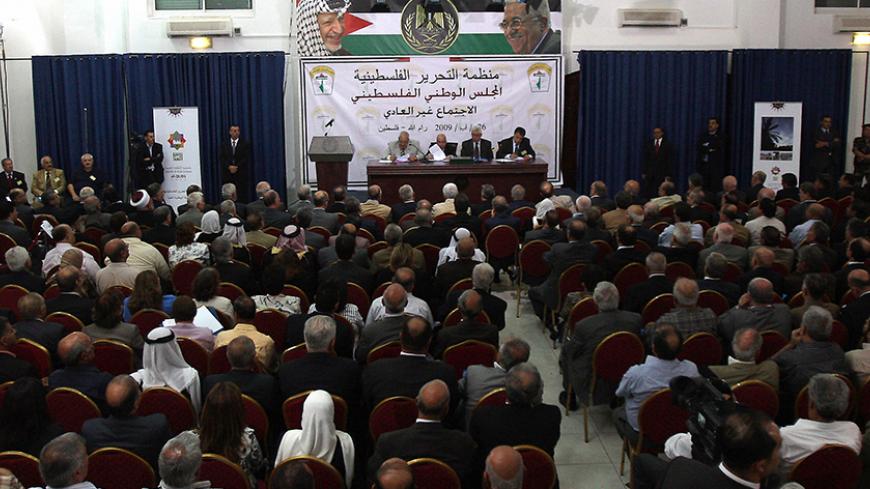 A member of the Palestine Liberation Organization’s Executive Committee has predicted that a possible decision to suspend security and economic ties with Israel will make it impossible for the Palestinian National Council (PNC) to hold a meeting planned for next February.

Hanna Amireh told Al-Monitor that plans are set to hold the Palestinian parliament in exile late February or early March 2016. “But if certain decisions are made, especially in relation to security and economic relations with Israel, then it is unlikely that the PNC will meet," he said. "Israel will most likely take measures that will prevent us from having enough people to attend, and as a result we will not have a quorum.”

Amireh, who is also a member of the political bureau of the Palestinian People’s Party, said that hard choices regarding security cooperation with Israel have not yet been fully agreed on out of fear of Israeli retribution. He told Al-Monitor, “There are some, for example, who expect that Israel will place a full siege on all Palestinian areas and separate them from each other and that Israel will confiscate all Palestinian funds, which are the right of the Palestinian people, and that the Israeli army will reoccupy all areas.”

He said that it is unlikely that Hamas and Islamic Jihad members will attend the upcoming meetings because of the unresolved conflict between the leading Palestinian groups, and noted that the Palestinians are planning to decide soon on going to the UN Security Council with a new resolution through the Arab League.

The full text of the interview with Amireh follows:

Al-Monitor:  What are your expectations from the upcoming meeting scheduled before the end of the year between the Executive Committee and the PNC’s preparatory committee?

Amireh:  As per a previous decision, the PNC was to meet within three months. These three months will be over soon without anything happening, and we will soon extend the delay another three months. In order for the PNC to meet, we need to have finalized a political statement including the future of the relationship between the Palestinian National Authority and Israel. We also need to reach agreement on membership in the PNC, which can reflect a wide political base and include all groups including Hamas and Islamic Jihad. All this requires subcommittees that work hard to produce positions, and this takes time.

Al-Monitor:  In terms of the inclusion of Hamas and Islamic Jihad, it appears until this moment that they are not agreeing to join the upcoming meeting. What can you do to encourage them to attend?

Amireh:  It is true that their reaction has been negative until now. They are demanding a new PNC — in other words, a review of the current membership and new elections to the council. The current factions within the PLO say that Hamas and Islamic Jihad should attend the current PNC — which they are members of — by way of the elected Palestinian Legislative Council and other forums, and then we can decide the format of any new PNC. But I believe these are superficial reasons. The real problem is the struggle between the PA and Hamas, and it is unlikely that Hamas will attend until these differences are resolved.

Al-Monitor:  In terms of the PA and the possibility of dissolving it, what is the PLO Executive Committee’s position? Israel has said it has no problem with dissolving the PA. Do you believe it is advantageous or disadvantageous to dissolve the PA?

Amireh:  I want to state clearly that there is no one in the PLO and in the Executive Committee who is calling to dissolve the PNA. There are talks about reform and changing the path of the PA in terms of its relationship with Israel on the security or economic fronts. At present, the concern is what Israel will do as retaliation. There are some, for example, who expect that Israel will place a full siege on all Palestinian areas and separate them from each other and that Israel will confiscate all Palestinian funds, which are the right of the Palestinian people, and that the Israeli army will reoccupy all areas. This is what we expect as an Israeli reaction. As to the PNA, we have little fear of Israel and its potential control of Palestinian areas, because it is already doing that, as seen by the regular infiltration into PA areas. There are fears that what might happen is the takeover by Islamists and the current situation replaced by total chaos.

Al-Monitor:  The PLO Executive Committee had agreed to end all issues related to the Oslo Accord. When will that decision be carried out in terms of security cooperation?

Amireh:  The Oslo Accord has been rejected by Israel, which has not been committed to its clauses. Israel has returned to a near total reoccupation of all Palestinian areas, except daily livelihood issues. The civil administration is back and there is no safe passageway [between Gaza and the West Bank]. All these commitments in the Oslo Accord have been violated by Israel. That is why there is talk about what to do as the Israeli violations and lack of commitment continue. This will be the content of the letters we intend to send to the Israeli prime minister and a number of world leaders, letting them know in exact detail what the Israeli violations are and that if these violations continue, we are no longer bound by the Oslo Accord.

Al-Monitor:  President Barack Obama has all but opened up the opportunity for Palestinians to challenge Israel internationally. Why has the PLO been slow in taking up this challenge? What is holding up the PLO’s efforts on the various international forums?

Amireh:  We are considering going to the United Nations Security Council with a call to the international community to condemn the continued settlement expansion and the takeover of Palestinian lands.

Al-Monitor:  Will you be seeking a resolution similar to the French one that calls for a time frame to end the occupation? And will you do it through the Egyptian envoy?

Amireh:  This will be a totally new resolution based on Palestinian decisions. This will be different than the French resolution — which, by the way, the French have backed away from. And we will deliver our ideas to the Arab Follow-up Committee, which we hope would accept our recommendations.

Al-Monitor:  It has been suggested that the upcoming PNC can be elected by secure online voting. Will you support such an idea in order to have a genuinely representative PNC?

Amireh:  The issue of membership will be discussed, but will not be applied immediately. The regular session of the PNC based on the current membership must meet first and decide how the new PNC membership and work will be.

Al-Monitor:  When will the PNC meet?

Amireh:  If things continue as they are now, we should be able to hold the next session within three months from now — in other words, late February, early March 2016. But if certain decisions are made, especially in relation to security and economic relations with Israel, then it is unlikely that the PNC will meet at that time because we would be in the middle of a crisis with Israel.

Al-Monitor:  Why would such a decision affect the holding of the meeting of the PNC?

Amireh:  The reason is simple: Israel will most likely take measures that will prevent us from having enough people to attend, and as a result we will not have a quorum.