Has Bibi given up his battle against Iran nuke deal?

Prime Minister Benjamin Netanyahu, who dedicated years to claiming that Iran was working toward a nuclear bomb, has been silent on the IAEA's decision to close its investigation into the matter due to a lack of evidence. 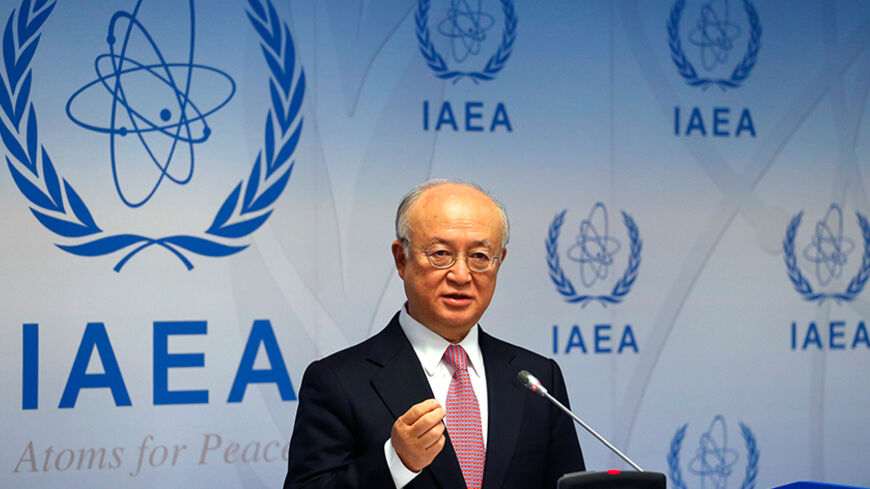 On July 14, just hours after six world powers signed the nuclear deal with Iran, Israeli Prime Minister Benjamin Netanyahu called a press conference. In dramatic fashion, he announced, “The world is a much more dangerous place today than it was yesterday.” He went on to warn, “The leading international powers have bet our collective future on [the] deal,” because Iran will now have the capacity to build an enormous nuclear arsenal. He concluded his statement with a threat and a promise: “Israel is not bound by this deal with Iran because Iran continues to seek our destruction. We will always defend ourselves.”

On Dec. 15, the International Atomic Energy Agency (IAEA) released a statement that it was ending its investigation into Iran's nuclear program because there was no evidence that Tehran had continued its research on the development of nuclear weapons after 2009. Considering Netanyahu's dramatic press conference less than six months ago, one question comes to mind: Why is Israel, at least officially, content to issue a relatively low-key response to the IAEA’s decision to end its investigation into whether Iran had either developed or attempted to develop nuclear weapons? After all, Tuesday’s statement effectively sealed the case opened 12 years ago in response to suspicions that Iran was actively trying to obtain nuclear weapons for military purposes. The United States congratulated the IAEA for its decision.

If one were to rely on Netanyahu’s previous statements and his decadelong international struggle against Iran’s nuclear program, the decision should be viewed as nothing less than Israel’s worst nightmare. Beginning in the mid-2000s, when he served as leader of the opposition, and later, during three terms as prime minister, Netanyahu made stopping Iran’s nuclear program his primary objective, putting the issue on the international diplomatic and political agenda. He brandished this accomplishment proudly, when sanctions were still in place, and issued veiled and open threats that Israel might even attack Iran to defend itself and prevent a “second Holocaust.”

For years, Netanyahu hardly delivered a speech that didn't mention the Iranian bomb, regardless of whether he was speaking overseas or to an Israeli audience. Now, however, he seems to be letting an important statement by the IAEA from its Vienna headquarters slip right by. His government’s only official response has been a statement by the Foreign Ministry that there are still "serious doubts" about Iran's nuclear program.

Over the past few years, Israelis have grown accustomed to receiving high doses of information about the Iranian nuclear bomb. It was regularly splashed across the headlines. In this instance, however, Israelis are not being given the kind of explanation they have come to expect in response to the recent development. It hasn't been forthcoming from the prime minister or even from the defense minister. Neither of them is prepared, it seems, to look the public squarely in the eye and explain the significance of the IAEA's decision. Neither of them has made any mention of how Israel intends to respond. There's certainly been no insinuation that the military option remains on the table. That would have been de rigueur just a few months ago.

Obviously, no one expects Netanyahu to disclose state secrets concerning military preparedness. Still, Israelis might expect a brief update at the very least from someone who spent more than a decade intimidating them with tales of their impending destruction and who regarded the nuclear deal with Iran as a milestone on the route to that terrifying scenario.

As to be somewhat expected, when the prime minister isn’t focused on the Iranian issue, the media and political establishment tend to ignore it. Netanyahu is not only the best political player in Israel today, he also has the sharpest instincts when it comes to using the media to his advantage to spin events. Luckily for him, none of his political rivals has been sufficiently astute to attack him over the IAEA decision, which in fact is a resounding defeat for him. Thus, Netanyahu reaps the benefits of the political system’s failure to understand or take an interest in the latest developments.

What, in fact, caught Netanyahu's interest in the days following the IAEA decision to close the case against Iran? On his very active Facebook page, Netanyahu had plenty of time to tell Israelis about his visit to the Southern Command, during which he inspected “our forces’ readiness,” on the day of the IAEA's announcement. He went on to say that he found the forces well prepared, adding that they were acting methodically and aggressively against Hamas in Gaza. He later took the time to attack Palestinian President Mahmoud Abbas for his ongoing incitement (so claimed Netanyahu) and for fabricating propaganda. There was not a word about the Iranian bomb.

In another post that same day, Netanyahu told his followers about “something you won’t hear about in the press.” He was referring to the United Nations' annual Human Development Index, which ranked Israel the 18th most advanced country in the world in 2014. It had been 19th in the previous index. Netanyahu crowed, “This is further evidence that the policies of the governments I headed have led to an improvement in the quality of living in Israel.” OK, but what about the international community's other important decision, which ushers in a new era for Iran and opens the country up economically? Israelis didn’t hear a word about that from their prime minister.

It is quite possible that Netanyahu is waiting for another opportunity to bring up the IAEA, but it is more likely that he has simply gotten everything he can out of the Iranian issue. He recognizes that Iran is no longer on the international community’s agenda, that the nuclear deal is already part of US President Barack Obama’s legacy and that a unilateral attack by Israel is no longer a viable option. In addition, Netanyahu has in the meantime succeeded in creating new, alternative threats to Israel’s security, the foremost being the Islamic State. He assumes the tangible threat of terrorism nearby will cause Israelis to forget about Iran, and of course, he is right. The Iran file has been closed. No one in Israel seems interested in it anymore.