Amid the imminent lifting of sanctions, Iran's complicated licensing and permit regulations continue to deter investment — despite the Rouhani administration's efforts. 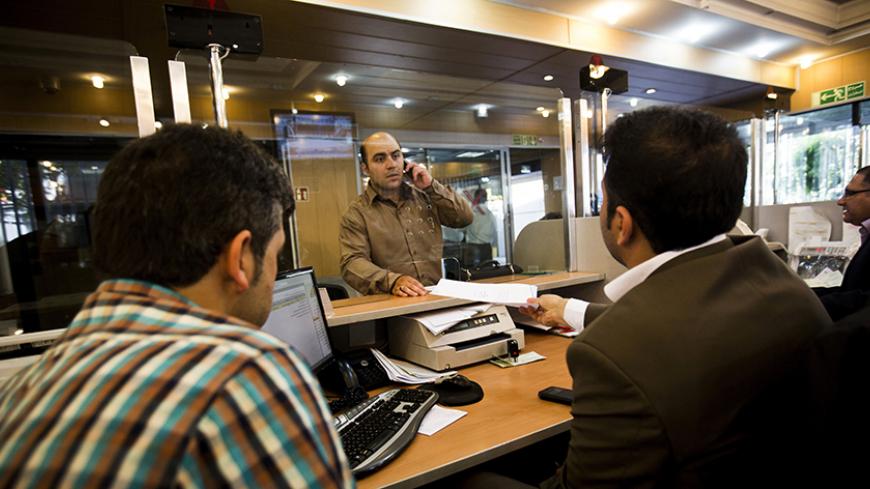 An Iranian customer speaks with a bank clerk at the Export Development Bank of Iran in the capital, Tehran, July 27, 2015. - Getty Images/Behrouz Mehri

TEHRAN, Iran — Reform of Iran’s cumbersome permit system has come under the spotlight in recent months. Yet, efforts to minimize the number of licensing documents required for doing business in various sectors of the economy have made slow progress due to resistance from state organizations, among other reasons.

An investor may need to obtain several permits, intermediate approvals, consents and authorizations — out of 2,000 listed ones — from different organizations to start business activity in the country. This complicated bureaucracy consumes considerable time and energy. In its latest effort to address this matter, the administration of President Hassan Rouhani gathered local business officials and experts for a conference in Tehran on Dec. 14. Addressing the one-day event, Minister of Economic Affairs and Finance Ali Tayebnia said his colleagues are working hard to improve the business environment in the post-sanctions era. Indeed, the latter is a prerequisite for the economy to achieve its ambitious medium-term growth targets.

It is noteworthy that Iran’s ranking in terms of ease of doing business has recently improved; while it stood at 152nd in 2014, it stands at 118th in the World Bank Doing Business 2016 report. Tayebnia acknowledged that many more efforts are needed to bring Iran to a two-digit ranking by next year, but expressed hope that this objective is achievable thanks to ongoing efforts to identify disruptive permits.

Tayebnia was referring to a specialized committee created seven years ago within the Ministry of Economic Affairs and Finance to deregulate the economy and facilitate the procedures for obtaining business permits under Article 44 of the Iranian Constitution, which pertains to privatizations. However, the law was revised in 2014, and the panel’s tasks were thus reduced to only one; that is, to facilitate the issuing, extension and abolition of business permits. The committee’s eight-member board was also reorganized, and the minister of economy is now the chairman.

Under Tayebnia, the committee has appointed a working group to examine some 700 permits that need to either be merged or dropped altogether. The review process has so far been tedious. Morteza Ezzati, head of the working group, has lamented the resistance of state organizations and sloth on the part of the committee’s board as the principal reasons for the sluggish progress his team has made. However, he still hopes that the working group will be able to cut at least 400 of the permits currently under review by the end of the current Iranian calendar year (March 20, 2016).

In theory, when the business environment improves, manufacturing and industrial investment will increase and more jobs will be created. The latter have been major objectives of the Rouhani administration’s deregulation policy, given that the unemployment rate has remained above 10% in the two years that the moderate president has been in office. However, the streamlining of permits will not automatically be achieved. Critics are calling for far firmer action — on a legal basis — that could force “certain” organizations to compromise on the issue.

Ezzati says his team has tried to discuss the issue with every single organization involved in the process, in a move to persuade such entities that deregulation efforts will also benefit them in the long run. However, he adds that many of the relevant organizations have rejected the call for merging or abolishing the unnecessary licensing documents in some way or another. The immediate benefit that the existing permits may carry does not appear to be negligible, he says.

The resistance to change comes as neither the government nor the unions are allowed to deprive a citizen of running a “legal” business, according to Article 44 of the constitution. Ezzati, the head of the deregulation working group, believes many of the constraints imposed on aspiring investors are “illegal and illogical.” Yet, there are some entities that have already agreed to voluntarily remove many of the documents they have so far demanded. The Ministry of Agriculture, for instance, has vowed to cut 300 of its total of 360 different permits.

There is also the issue of the deregulation committee’s capabilities. Its board members only meet for two hours once a week. In this vein, Ezzati suggests that the board must put further trust in the working group, should it remain unable to spend more time reviewing the working group’s reports and making final decisions on whether to abolish a permit. To accelerate the work process, the parliament could also play a role, Ezzati said.

Shapour Mohammadi, deputy minister of economy and president of the Dec. 14 conference, said a list of unnecessary business permits has already identified. The administration will soon send a bill, including the list, to parliament to build a legal basis against the entities opposing the deregulation efforts.

The parliament’s support would be essential as the huge investment Iran needs is unlikely to be attracted under the current centralized and bureaucratic practices. The Iranian economy needs a total of $150 billion to $250 billion in foreign investment over the next five years. This figure is far lower than the $750 billion officials hope to raise from domestic sources, including the private sector.

The changes outlined above, if implemented swiftly, can help attract investment, facilitate doing business and eliminate fraudulent and corrupt practices in conducting business activities that require licensing documents. If not, the economy could enter a more difficult period than that Iranians witnessed while sanctions were in place. Last but not least, even if the administration adopts smart regulations, it has yet to address concerns about investment, business and job security as well as undue market interference by influential groups and labor laws — just to name a few. In short, despite the imminent lifting of sanctions, the Rouhani administration certainly has its work cut out for it.