The Israeli army has closed three Palestinian radio stations in Hebron so far, a step that concerned parties say will only escalate the violence witnessed in the Palestinian territories. 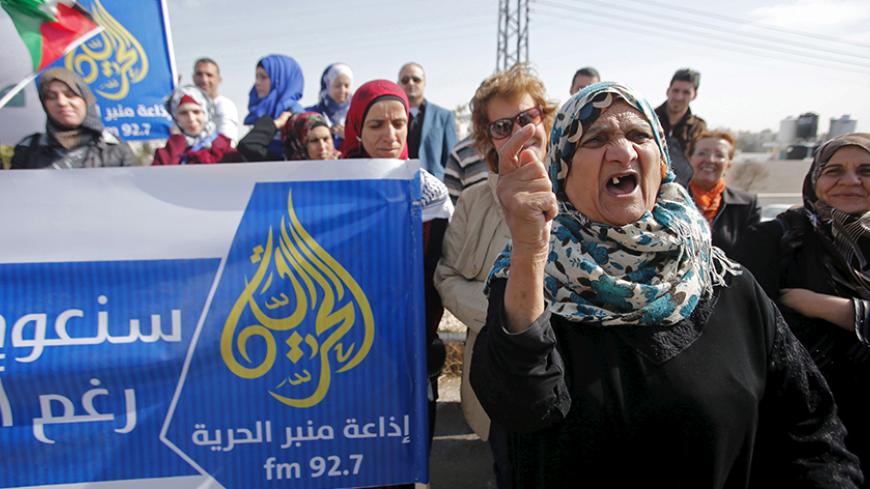 A Palestinian woman gestures during a protest against the shutting down of the main radio station by Israel in the West Bank city of Hebron, Nov. 3, 2015. - REUTERS/Mussa Qawasma

During November, the Israeli army confiscated broadcasting equipment and closed three Palestinian radio stations in the Hebron area. While the unprecedented move coincided with the increase in anti-Israeli attacks in the Hebron area, this action against private media reveals a change in Israeli policy.

Until November 2015, Israel has blamed Palestinian President Mahmoud Abbas and the official media, Palestine Radio and TV, with incitement to violence. No proof was ever given by the Israelis to substantiate the accusations against the official Palestinian media.

The attacks against the commercial private Palestinian stations began in the early hours of Nov. 3. Ayman al-Qawasmi, chairman of Manbar al-Huriya radio station, reported to the Palestinian Center for Development and Media Freedoms (MADA) the details of what happened: “Thirteen Israeli patrols surrounded the headquarters of the radio station, which is located in the Harizat building near the traffic department in Hebron. At approximately 1:50 a.m. on Tuesday, Nov. 3, 2015, dozens of IOF [Israeli Occupying Forces] raided the office and searched it, stopped the broadcasting, confiscated broadcasting equipment and carried out destruction to several equipment [such] as [computers, microphones, mixers rather than the furniture and the decor of the office].”

Qawasmi told MADA that two of the radio station’s workers were in the station at the time: presenter Mahmoud Agueniba and audio engineer Mohammed Abido. Both men, along with the station owner, were summoned by the Israeli army, who handed them a six-month closure order for allegedly “exercising incitement.”

Qawasmi told Al-Monitor that what happened to his station is a crime. “The Israeli occupiers carried [out] a crime against Manbar al-Huriya radio station. They are trying to kill the Palestinian narrative. They are upset because we have exposed the lies in their narrative, including the fact that our citizen journalists have documented that Israel plants knives near killed Palestinians to justify their killings.”

Palestinians have regularly accused Israeli soldiers and settlers of planting knives after killing a suspected Palestinian in order to justify their acts. Israeli journalist Amira Hass wrote a column about this issue Nov. 16 titled, “Does the Israeli army plant knives on Palestinians?”

Qawasmi vehemently denied Israeli charges of incitement. “This is a baseless justification. The occupiers are the real inciters. When we call a Palestinian a martyr, they call it terror and incitement.” In addition to the occupation being the biggest incitement, Qawasmi argues, one should listen to what the settlers' Kiryat Arba radio station says. “They regularly call for the killing of Arabs and attack our prophet,” he said.

The chairman of the board of Manbar al-Huriya also questions the incitement claim by citing what happened in November. “Since they closed our station, the violence has increased. So if we were the source of incitement, how do they explain what has happened?” he asked in an interview with Al-Monitor.

Qawasmi positively reflects on the last few weeks jokingly, saying that the Israelis have made him a local hero. “We are receiving serious acts of solidarity from the Palestinian, Arab and international community. They might have closed Manbar al-Huriya, but they opened a lot of platforms. I am on local and satellite media daily talking about what happened to us. They have made me a hero.”

To remedy the closure of his radio station, Qawasmi has had to find ways to pay the 42 staff employees on the station’s payroll. “A local station, OneFM, has kindly given us space to air some of our sponsored programs and our advertisements. This allows us to recover some of the lost revenue.”

In addition to the closure of Manbar al-Huriya, a similar action took place against Radio Hebron Nov. 21 and Dream Radio Nov. 29. Ezz Haddad, the head of programming at Radio Hebron, was quoted in the media as saying that Israeli troops confiscated broadcasting equipment, barred workers from coming to its offices and handed them a six-month closure order.

Amjad Shawar, the station’s director, called the Israeli action “criminal and barbaric.” Shawar noted that the radio station has 30 Palestinian journalists, technical and administrative staff on its payroll.

Fouad Jabarin, a founding member of a local community radio station, Dahriya Radio, south of Hebron, told Al-Monitor, “Media is playing an effective role, and the occupiers don’t like that. What really bothers them is the use of citizen journalists especially by Manbar al-Huriya, which allowed the public to have information in real time on the situation on the ground.”

Jabarin concedes that the Israeli actions against the three stations has had a chilling effect on all other stations. About 25 private radio stations are licensed by the Palestinian government to broadcast in the Hebron district. “Station owners and staff are bracing themselves worrying if they will be next in the continuous Israeli attacks against the Palestinian press,” he added.

The closure of Palestinian radio stations follows the Israeli narrative that attempts to blame the current violence on a small group of inciters rather than accepting the Palestinian narrative that it is the result of a sense of frustration and hopelessness by a population that sees no political horizon. The interesting development in the attacks on private radio stations is that it reflects an admission that the previous attacks against the Palestinian Authority and official Palestinian media were baseless. A new front, however, has now been opened against private commercial radio in Hebron.