Bootlegs of American franchises in Iran may very well fall victim of the nuclear deal as Western companies consider expanding their businesses there. 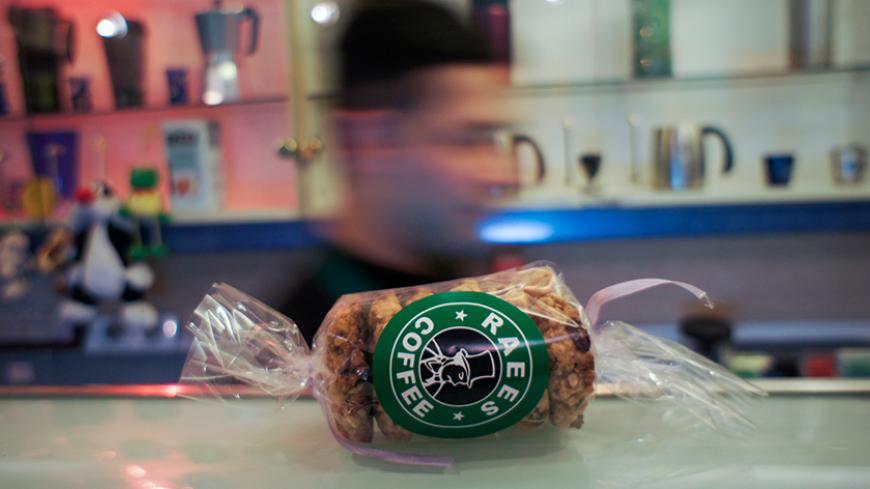 A product displaying the Raees Coffee logo is seen on a counter at a branch of the coffee chain in central Tehran, Feb. 5, 2011. - REUTERS/Morteza Nikoubazl

The line was around the block. When the Baskin-Robbins first opened on Valiasr Street in Tehran, you’d have to wait a good 30 minutes to get in the door, and even then, you might not get the flavor you wanted. Everything from the sign to the cups and signature pink spoon — not to mention all 31 flavors — were on point.

I had to know its secret. After all, it’s an American ice cream parlor in Iran, a country that hasn’t had direct relations with the United States for some 30 years. “It’s actually Italian gelato,” the manager said, grinning from ear to ear, when I visited the store in 2009.

The Tehran "Baskin-Robbins" was a bootleg American franchise, but, in my opinion, with better ice cream. Surprisingly, it wasn’t alone in emulating American fast food franchises. Over the past decade, everything from Burger King, Carl’s Jr., Chipotle, Domino’s Pizza, KFC, McDonald’s, Pizza Hut, Starbucks Coffee and Subway has found its way to the Islamic Republic of Iran in the same manner. Some of the fake franchises were exact replicas, while others had slight modifications, including the names. Burger King became Burger House, McDonald’s became Mash Donald’s, Pizza Hut became Pizza Hat, Subway became Subways and Starbucks became Raees Coffee. And in all, there was always a friendly reminder that these restaurants were in Iran: framed photos of Supreme Leaders Ayatollah Ruhollah Khomeini and Ayatollah Ali Khamenei and a sign telling women to respect their hijab.

In 2010, that "Baskin-Robbins" was nowhere to be found. Rumors circulated that it went under for financial reasons, while others pointed at a more likely culprit: corruption. But the truth was that Shirin Salamat, an attorney who advises on brand protection strategy, licensing and trademark enforcement, represented the real Baskin-Robbins while working at a law firm in Tehran and single-handedly closed all five Iranian shops for their client.

“There is a huge misconception about the power of brands in protecting themselves in Iran,” says Salamat, who now works at Salamat & Associates. “The Patent and Trademark Office of Iran is part of the World Intellectual Property Organization and the Madrid Protocol, and there is a specific court that handles these infringement cases. They are fairly knowledgeable about international brands, international best practices and regulations.”

The firm Salamat was employed at prior to opening Salamat & Associates also represented Starbucks in its case against Raees Coffee. She said, “[Starbucks] decided not to move forward as they did not see themselves entering the market anytime soon. Many of the brands didn't want to spend additional funds prosecuting, since their brand was getting exposure in a country where they could not do business themselves.”

She added, “However, considering the recent events, they are now looking at the possibility of entering the market and will proceed with full force.”

KFC has a similar problem. Countless versions of the Kentucky chicken franchise have popped up all over the country, such as Kabooky Fried Chicken and Super Star Fried Chicken. That was before Amir-Hossein Alizadeh, the owner of Tehran's "KFC, " managed to convince the Iranian government to let him open shop with a smiling Colonel Sanders and the signature buckets after five years of haggling.

But just like the others, this one turned out to be a fake. KFC hadn’t reopened since closing during the 1979 revolution. A Yum! Brands spokesperson said in a 2012 statement, “We have filed a legal action against the company and individuals claiming to have rights to open KFC restaurants in Iran.”

The process to file a trademark infringement lawsuit in Iran is similar to those in other countries. The registered brand must provide proper documentation and file a complaint with an Iranian court. The brand titleholder must then register it with the patent and trademark office in Iran. As long as the brand’s home country is party to a relevant international treaty, their registration will be honored in an Iranian court, claims Salamat.

The future of Western brands

With the nuclear deal between Iran and six world powers in place, a tsunami of Western investment is heading Iran’s way. A recently published World Bank report estimates that foreign direct investment inflows will reach $3 billion to 3.2 billion in 2016-17, assuming that sanctions on Iran are lifted and economic growth reaches 5.5% in 2017. Already, Asian and European companies are pouring into Tehran to discuss the potential of investing in Iran’s oil and energy, manufacturing and tourism sectors.

A few days after the nuclear deal was signed this summer, it emerged in the media that McDonald’s had its eyes on Iran. Its official website even included an application form for those interested in representing the American franchise and included the following message:

It’s unrealistic to assume that the golden arches will find their way into Tehran anytime soon. It is seen as a quintessential symbol of American cultural imperialism, what Iranians call "gharbzadeghi," or "Westoxification." Even the supreme leader has voiced dismay and said he wouldn’t allow any American cultural or economic influence inside Iran.

With the potential for Western investment after the nuclear deal, it’s important to know that there are ways to prosecute and prevent infringements on foreign brands — regardless of their presence in Iran.