Iran sets its sights on Armenia

Competition between US, Iran in Caucuses heats up as Iran identifies a new trade partner. 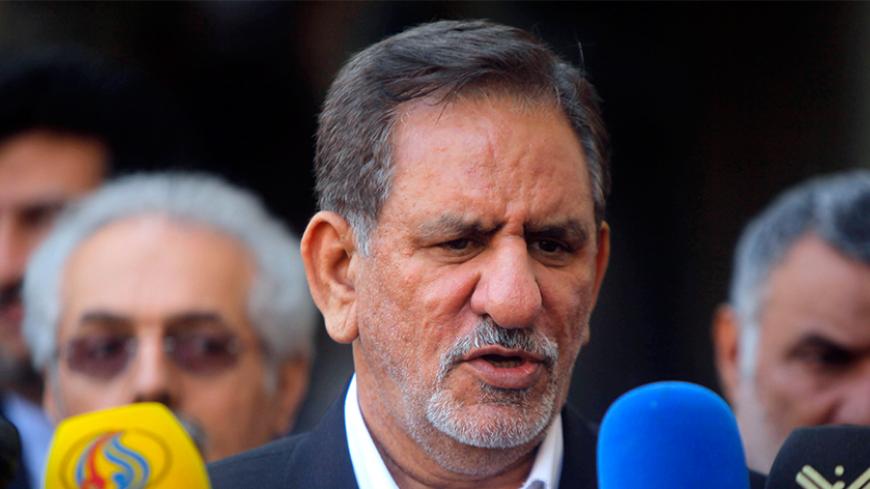 TEHRAN, Iran — If one thing is certain about Iran’s recent move to step up relations with Armenia, it’s that it’s for very good economic reasons. On Oct. 14, Tehran took the opportunity of impending sanctions relief under the nuclear deal signed in July to send First Vice President Eshaq Jahangiri to Armenia to see about expanding bilateral economic relations. Armenia is the sole Eurasian Economic Union member state that shares a land border with Iran, and could thus be a “gateway for Iranian goods” to the 5 billion-strong markets of Eurasia and Europe, according to Jahangiri, the most senior Iranian official to have visited Yerevan since 2011.

Iran and Armenia have already signed agreements that could keep their ties close for years. For instance, Armenia is providing Iran with electricity in exchange for natural gas imports. The swap is set to continue for the next 15 years, with the electricity generated from power plants built by Iranian engineers on the Armenian side of the border. Under the 2007 gas pipeline contract, Armenia generates and sends to Iran three kilowatt-hours per cubic meter of natural gas. When this contract expires, Iran will get paid for its natural gas exports, and Armenia will be free to use the generated electricity entirely for domestic consumption. It should be noted that Armenia’s political disputes with Azerbaijan and Turkey have left it with Georgia and Iran as the best options for meeting its energy needs.

Jahangiri’s recent visit was mainly aimed at reviving Iranian projects suspended due to sanctions and a shortage of financing. The delayed projects include a high voltage transmission line, connecting the Armenian power grid with that of Georgia and a third transmission line between Iran and Armenia worth around $120 million. The latter is set to come on stream in 2018, increasing the transmission capacity from Armenia to Iran from 300 to 1,000 megawatts. Among other matters raised by Jahangiri during his visit was an ongoing project to connect Iran’s rail network to that of Armenia, a plan that would provide Armenia with access to the southern Persian Gulf states through the International North-South Transport Corridor.

Jahangiri’s call for a focus on bilateral trade cooperation during his stay in Yerevan appears to have been welcomed by Armenian entrepreneurs, as soon after, a group of them announced that they will visit Iran on Nov. 9. According to the Iran Chamber of Commerce’s website, Armenia’s minister of economy will lead the delegation, which consists of about 50 top managers in banking, IT and agricultural businesses. This could be in line with a proposal offered by Jahangiri to create a trade hub in Armenia, from where Iranian goods could be re-exported not only to Belarus, Kazakhstan, Kyrgyzstan and Russia, but also to Europe and the United States.

The head of the Iran-Armenia Chamber of Commerce, Levon Aharonian, believes the new effort to facilitate trade could help curb corruption and cut import duties from Iran significantly. In an article in the leading Iranian Tejarat-e Farda economic magazine, Aharonian argued that Jahangiri’s proposal — if accepted by the Armenian government — could be a “great opportunity” for Iranian traders looking for broader markets. However, he wrote, traders and officials from both sides should first help come up with a new trade mechanism to make the idea feasible. Many of the 6,400 items the European Union allows to be imported from Armenia, Georgia and Azerbaijan at very low tariffs can be supplied by Iranian manufacturers, Aharonian noted.

Iran is currently Armenia’s fourth largest trading partner after the European Union, Russia and China. Moreover, the Islamic Republic’s annual trade with Armenia is set to increase to $1 billion in the near future, up from $300 million now. Earlier this month, Armenian Prime Minister Hovik Abrahamyan agreed with a proposal offered by the Iranian side to revive Armenia’s factories built during the Soviet era. Iran says the factories can be used as a base to process semi-finished goods imported from Iran to eventually be exported to third countries.

But the Islamic Republic is not alone in its interest in Armenia. The United States has provided millions of dollars in assistance to Yerevan since its independence from the Soviet Union in 1991. Moreover, Washington has long been negotiating with the Armenian government to expand bilateral trade and investment relations. Lastly, the United States has — as is also largely the case with Iran — supported the Armenian government in its political and territorial disputes with neighboring states since its independence. These parallel efforts by Tehran and Washington to court Yerevan could end up in a potential clash of interests, even in the aftermath of the Joint Comprehensive Plan of Action, which has repaired US-Iran relations to some extent.

The US 2015 budget provides $24.7 million in assistance to Armenia. Washington has also reached several economic agreements with Yerevan, including the Trade and Investment Framework Agreement (2015), Joint Economic Task Force (1999), Investment Incentive Agreement (1992), Agreement on Trade Relations (1992) and Bilateral Investment Treaty (1992) — all of which provide platforms for deeper economic and trade cooperation between the two countries. According to the Armenian National Committee of America, the two countries have several options to improve their trade relations — including adoption of the Double Taxation Treaty, which is needed to replace the outdated US-USSR Double Tax Treaty from 1974. The committee believes this treaty is an impediment to US investment in Armenia and hinders economic relations between the two countries.

Iran sees Armenia as a regional strategic trade partner, while the United States has been investing in the Caucasian country for an extended period. A potential clash of interests between Iran and the United States thus appears as a serious challenge on the distant horizon. However, if this challenge is addressed wisely and in a timely manner, conflict can be avoided and the American market could even be accessible to Iranian manufacturers through Armenia in the medium term.