Is it time for China to step up its engagement in the Middle East?

It is time for China to capitalize on its position as the only great power with good relations with both Iran and Saudi Arabia to facilitate regional engagement. 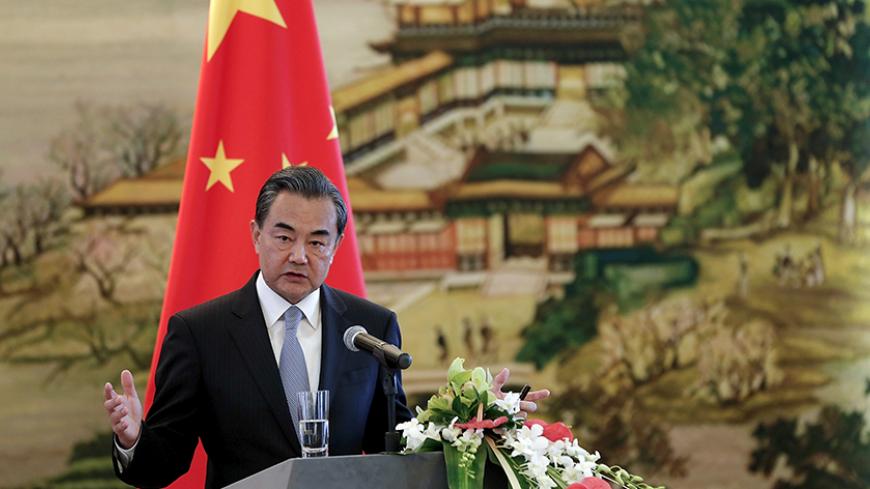 Chinese economic might is not a prospect in the distant future, but a current reality. Last year, China’s economy — in terms of purchasing power parity — overtook that of the United States for the first time. Yet, this momentous recalibration of the global economic power balance has not translated into a commensurate political shift. Nowhere is this more evident than in the Middle East, where China holds the position of top trading partner of several states, yet is effectively a third-rate power in terms of its political influence. If China wishes to become a true global power, it needs to step up to the plate, and it should do so on the foremost stage of geopolitical showdowns: the Middle East.

In recent conversations with Al-Monitor, several Chinese experts on the Middle East, on condition of anonymity, acknowledged the mismatch between China’s economic and political influence. One leading academic with close ties to the ruling elite pinned it down to what he referred to as core principles of Chinese foreign policy: “mutual respect, dignity and noninterference.” Yet, the trajectory of Chinese involvement in places such as Africa tells a different story. While short of relegating their stated noninterference to a thing of the past, it is apparent that the Chinese have been assertive when their interests in Africa have been threatened.

Indeed, the most striking example of China overlooking its noninterference policy is Beijing’s response to the instability in oil-rich South Sudan, where Chinese state firms have important energy interests. Chinese Foreign Minister Wang Yi has been directly involved in conflict resolution efforts there, while Beijing earlier this year took the unprecedented step of sending hundreds of combat troops to join the UN peacekeeping mission in the country.

In contrast, while China has maintained a high-level diplomatic representation in the multilateral forums on the two most recent and pressing crises engulfing the Middle East — the Iranian nuclear issue and the Syrian civil war — it has taken the backseat in deference to the United States and Russia. Indeed, this fits with the pattern of China’s criticism of Western policies toward the region while in effect relying on Western hard power to ensure its energy security. Despite this dynamic, the potential for a greater Chinese role in the region should not be underestimated — even though it may appear far-fetched.

China should utilize its economic gravitas and turn it into political power by adopting a more proactive posture toward West Asia. China should do this not only to pursue a position as a true global power, but also to secure core Chinese interests, including energy security and addressing the threat posed by the Islamic State (IS). Indeed, in various conversations with Al-Monitor, it became apparent that Chinese officials and Middle East experts view militant Islamism as a key concern. In this vein, it should not be overlooked that China has an Islamist problem of its own, and that individuals linked to the unrest in the western Xinjiang region are reported to have joined IS. Several Chinese experts on the Middle East who spoke with Al-Monitor on condition of anonymity all separately expressed deep cognizance of the threat posed by the prospect of these militants returning home — and more of their kin joining. Of note, reports surfaced Nov. 18 of the execution of a Chinese hostage by IS.

Beijing’s policy of mutual respect, dignity and noninterference has had its dividends. Yet, these dividends are what paradoxically have put China in the unique position of now being able to play an important role as a proactive facilitator of dialogue. The Saudi-Iranian cold war is one of the most important challenges facing the region today. China is uniquely equipped to facilitate direct engagement to address this rivalry for two main reasons.

First, China is the only permanent member of the UN Security Council that enjoys good relations with both Iran and Saudi Arabia. In response to this observation, one Beijing-based Chinese expert on the Middle East quipped to Al-Monitor: “We don’t have good relations [with Iran and Saudi Arabia]. We have normal relations.” Yet, this normalcy may very well be the key to effective conflict resolution. Indeed, in a climate where other major powers carry unhelpful baggage and are faced with deep mistrust by their own regional allies — Saudi Arabia’s hesitance about the United States is not very different from Iran’s reservations about Russia — China has a far greater flexibility due to its “cleaner” scorecard. The deep anxieties in Tehran and Riyadh about the potential for US-Russian collaboration over their heads should not be underestimated; even if great power convergence helps calm the situation in Syria, the anxieties it could unleash can very well spell trouble elsewhere.

Second, current economic realities also boost China’s unique opportunity to truly step up to the plate. Oil exports from South Sudan, where Beijing has not hesitated to roll up its sleeves, only account for a few percent of total Chinese oil imports. In comparison, Tehran and Riyadh have at some points this year provided one-quarter of China’s crude imports. The Chinese may view this as a liability that prevents interference rather than an asset that offers it great influence. However, in the context of the current climate of low crude prices, an oversupplied oil market and, consequently, troubled Iranian and Saudi economies, it is apparent that Chinese energy ties with regional powers could very well be the key to China’s successful adoption of a more proactive posture toward the region.

Beijing has several options to work to forge Saudi-Iranian engagement. Among these is using available multilateral forums to press for a Chinese-facilitated Saudi-Iranian channel and also pushing for such engagement in a trilateral setting. There are many other innovative approaches to jump-start Iranian-Saudi engagement.

China has the potential and capability to transform its role to become a true global power and, in this vein, convert its economic influence into political clout. Along with great power comes great responsibility; it is time for Beijing to assume this responsibility within the framework of mutual respect, dignity and noninterference.