The recent raid on Islamic State safe houses in Diyarbakir has shed light on the organization's activities in Turkey and prompted Turkey to reconsider its top security priorities. 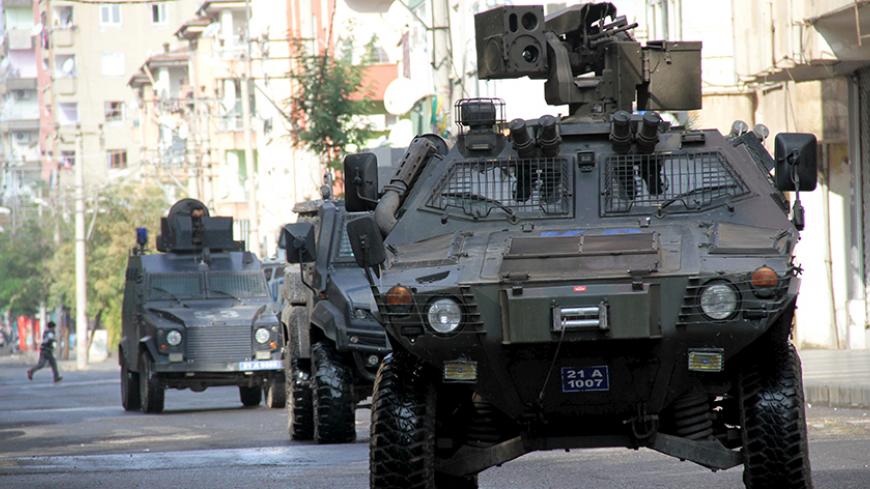 In the wake of the suicide bombing attack in Ankara by Islamic State militants that took dozens of lives Oct. 10, Turkish police have launched large-scale operations against the IS network in Turkey.

On Oct. 26, there were simultaneous raids in 17 different locations in Diyarbakir. Two of the targets were single-family houses on the intersections of 42nd and 53rd Streets and Dr. Sitki Gural Avenue, very close to the center of the city.

Unfortunately, these two raids did not go as well as the others and they became the scene of unprecedented clashes between the police and IS militants. According to the police, special operations staff and Al-Monitor's local sources in Diyarbakir, the raid that began as a routine arrest operation deteriorated into seven hours of bloody clashes.

Police teams isolated the area as usual and first moved against the house on 53rd Street. The inhabitants did not flee or surrender, as they usually do. First, one IS militant blew himself up by setting off the explosive vest he was wearing when the police were about to enter the house. The blast killed two SWAT team members, Sadik Ozkan and Gokhan Cakici, and wounded five other policemen.

Speaking to Al-Monitor, security forces said the casualties resulted from a lack of body armor. Then clashes broke out between the police and the remaining militant in the house. Another IS militant attempted to blow up the house but was killed before he could do so.

A search of the house yielded a sizable supply of TNT, RDX and C-4 explosives and some 200 kilograms (441 pounds) of ammonium nitrate.

The clashes on 53rd Street alerted the five IS militants in the other house about 300 meters (0.2 miles) away. While the police was surrounding that house, the fighting began. A police officer noted they were surprised when IS militants did not try to escape during those seven hours and did not respond to the calls for surrender issued every 15 minutes.

‘‘Honestly speaking, their continuing to clash with us for seven hours without trying to escape until they ran out of ammunition caught us by surprise. This is the first time they acted this way,” A policeman who had taken part in earlier operations told Al-Monitor on condition of anonymity.

According to local security sources who spoke to Al-Monitor, also on condition of anonymity, it was hard to say exactly why those seven IS militants reacted differently from the others apprehended in earlier operations, but they speculated that these militants might belong to a suicide bombing team.

The sources said five of the militants hailed from Turkey’s southeastern province of Bingol and two were likely foreigners. Two of the militants were women. According to the sources, the foreign militants had entered Turkey illegally about a month and a half ago and settled in Diyarbakir to plan suicide bombing attacks against pro-Kurdish Peoples’ Democratic Party (HDP) targets on the eve of the general elections. It is likely that the police were not aware of their identities before the raid.

Turkish newspapers reported that Siddik Bunul, who was killed in the raid, was an IS member and responsible for these cells and their organization.

One report said Bunul, a father of three from Bingol, graduated from a Saudi university and had been traveling to Syria frequently. Bunul reportedly contributed to building up the organization's structure and had recruited many members. He had been detained several times in the past but had been released for lack of evidence. There are also claims that Bunul was known as the “judge of Raqqa,” the authority issuing death sentence verdicts from the group’s headquarters in Raqqa and Tell Abyad.

What did the Diyarbakir raids that killed two policemen, seven IS militants and wounded 20 policemen tell us about the operational capabilities of the Turkish security forces?

According to the security sources, there are about 20 other "action cells" in Turkey similar to the one in Diyarbakir. What sets them apart from the other IS cells raided up to now is that these ones were established in Turkey for attacks on specific targets and have abundant explosives and weapons. These cells are ticking bombs that prefer to fight to the end if directly confronted by security forces.

Ankara is now exploring how to identify and stop these cells in time.

It’s worth noting that these were the first armed clashes between IS militants and Turkish security forces since fighting broke out in Turkey’s central Anatolian province of Nigde in March 2014.

Considering the death toll, the length of the clashes and the damage at the combat scene, security sources told Al-Monitor the Turkish security forces did not expect an operation of such scope and had planned for a routine arrest operation.

A SWAT team member and friend of Gokhan Cakici, who was killed in the raid, told Al-Monitor, “Cakici had taken part in an operation two days ago against the PKK’s [Kurdistan Workers Party] urban structure. The target of the IS militants killed was the HDP. In other words, this raid in which Gokhan lost his life was for the security of the HDP in Diyarbakir.”

It is now clear that Ankara has become immersed in a two-front struggle against the PKK and IS and is on the verge of important decisions. One of these is whether the PKK or IS is the primary threat to Turkey. Even more important is whether Ankara is going to adopt the principle of “the enemy of enemy is my friend.”