Three sisters from Gaza decided to open an all-female cafe that they say allows patrons to be more comfortable and can serve as a venue for cultural events. 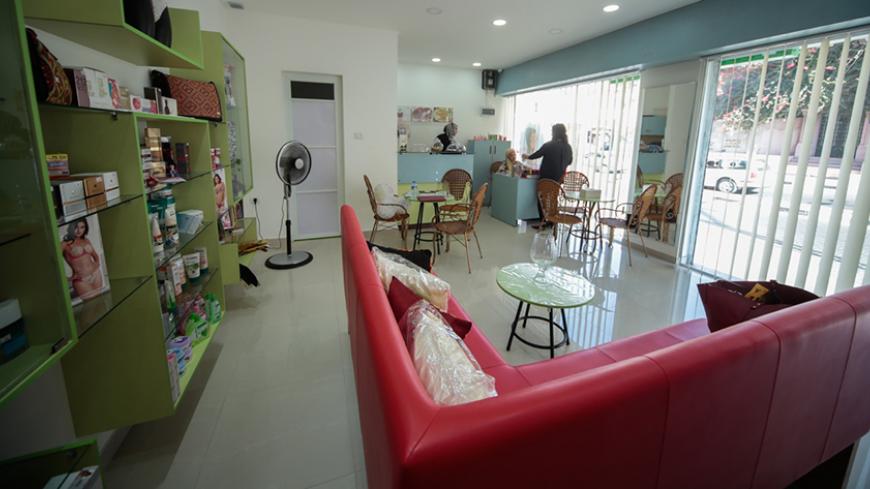 GAZA CITY, Gaza Strip — “We have forgotten that men and women are supposed to be different. As a result, our relationships are filled with unnecessary friction and conflict,” John Gray said in his 1993 book “Men Are From Mars, Women Are From Venus.”

Noon — a letter in the Arabic alphabet that is added at the end of verbs used for females in the plural — is an all-female cafe that opened Sept. 17 in Nasser neighborhood, west of Gaza City, far from the cafes and restaurants on Omar Mukhtar Street and al-Bahr Street.

The cafe manager, Nidaa Mhanna, 35, told Al-Monitor, “I thought about my sisters Nagham and Nihaya and decided to open the cafe to enhance women’s privacy, as they do not feel completely comfortable in restaurants and cafes with a mixed clientele. If a woman laughs or talks loud, everybody around her notices. So we thought of opening this cafe for women to be themselves without any fear.”

Al-Monitor visited the small cafe that is made up of a sofa in the center and two small tables facing it. Behind the sofa, wooden shelves showcase makeup and underwear. A small vitrine displays embroideries and accessories made by women. The cafe is painted in light green, blue and pink pastel colors.

“We want to provide women with special items, not just their coffee but books and clothes as well. Women might feel embarrassed to ask men in women’s clothes shops for these items,” Mhanna said.

She said that oftentimes when women pass by the cafe they express their appreciation for the all-female cafe or that the idea had crossed their minds, too. For this reason, Mhanna considers the cafe the result of collective female thought in the Gaza Strip, which indicates how much places reserved for females only are in demand.

She mentioned that the idea of establishing a female taxi company had crossed her and her sisters’ minds, but the cafe suggestion won. Gazan society doesn’t easily accept a female taxi driver, especially since she would also have to work at night.

Although the cafe is for women only, men contributed to its construction. Mhanna said, “Our father, Khodr Mhanna, offered us the place, and my husband, Mohammed Abu Hashem, who works in the human rights field, encouraged and helped me. Other men believed in our idea, such as interior designers Wael al-Hasanat and Nazir Mhanna.”

It is not only strong coffee that inspires women here, but there are books on the shelves by well-known Algerian novelist Ahlam Mosteghanemi, for instance. The three strong-minded sisters have made the small cafe into a special place with their fun presence. It is not just a commercial coffee shop, but a cozy one, too.

Nagham, 30, told Al-Monitor, “Some people thought it was a bad idea to separate men and women. But separation was not the goal. There are many mixed places, but our aim is to give special attention to women.”

Some men criticized the cafe, saying that it will harbor sexism and gossip or that it is a sort of luxury in Gaza. Mhanna said, “Gossip is everywhere and is not restricted to women. This in itself is a sexist misconception. Besides the cafe is not going against men, but seeks to honor women’s privacy. Most cities around the world have this concept, which they consider a necessity in social life. Why would its presence in Gaza be considered a luxury?”

Umm Khodr, 29, one of the cafe’s customers, said that she was able to breastfeed her 10-month-old son without having to worry about intrusive stares. She told Al-Monitor, “This is a great idea. My girlfriends and I didn’t know which suitable place to go to before.”

She added, “As females and mothers, we sometimes try multiple cafes to find a comfortable atmosphere for talking, laughing or maybe even ranting. But we rarely find a place where we aren’t being watched."

The atmosphere seems friendly and familial in the small cafe. Women talk to each other and joke, while others work. Tasnim Ishak, 27, was focused on her laptop screen while writing, when Al-Monitor interrupted her to ask about her opinion.

“I am not against men. This place is just like any other in Gaza, but I must admit that I am more comfortable here than in other coffee shops,” she said.

Noon's food and beverage menu includes Nescafe, cappuccino, hot chocolate, tea, fresh juice, donuts, crepes and cupcakes. The only employee, Waed Harazallah, 27, prepares everything patiently and skillfully. Mhanna often helps her, especially when it gets crowded in the afternoon and during holidays.

Harazallah told Al-Monitor that this is the first time she works at a cafe. She said that her husband’s encouragement, in addition to Noon being a women’s cafe, made her warm up to the idea. She said that the number of customers has increased and includes university students, mothers and professionals.

She talked about the challenges of the job, saying, “We suffer from long power cuts. The water is also too salty. I have to fill a large pot of mineral water every day.”

Mhanna interrupted Harazallah and said that another challenge is “the blockade that has impeded the entry of equipment and items specific for women.”

The Mhanna sisters look forward to adding another floor to their cafe. They also want to organize cultural and musical evenings for women as part of Noon’s future development plan.