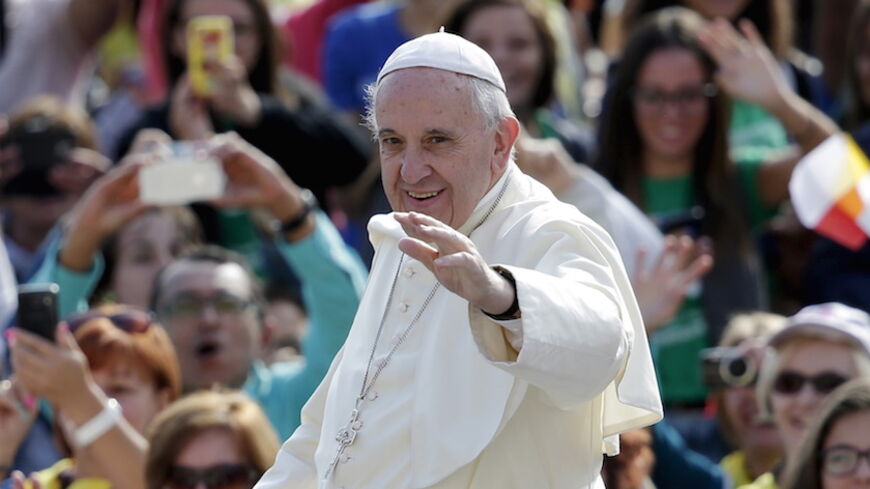 Pope Francis waves as he arrives to lead his Wednesday general audience in Saint Peter's Square at the Vatican, Sept. 9, 2015. - REUTERS/Max Rossi

Catholic Democrats are invoking the pope's moral authority as they make the case for the United States to resettle more refugees from Syria and elsewhere.

The lawmakers are leveraging the pontiff's upcoming visit to call for the United States to do more amid a growing migration crisis that has overwhelmed the Middle East and Europe. The White House said Sept. 10 it would seek to admit 10,000 Syrian refugees next fiscal year, up from 1,293 this year, while increasing the total number of refugees beyond the current 70,000 per year.

"Many in Washington are looking forward to a visit later this month by Pope Francis, who just this week asked the faithful throughout Europe to shelter refugees fleeing ‘death from war and hunger,'" Sen. Patrick Leahy, D-Vt., said in a statement on Sept. 9 following congressional briefings by Secretary of State John Kerry as part of his department's annual review of resettlement needs. "In the United States, we can do the same thing. We can respond, as we have before, with meaningful action that is worthy of a nation of immigrants with by far the largest capacity to act, as the world expects us to. I urge both the administration and leaders in Congress to do just that.”

House Minority Leader Nancy Pelosi, D-Calif., who is also Catholic, made a similar appeal on Sept. 10.

"We see Germany taking the lead on this. I hope that other countries will follow suit and that we will do something more substantial," she said at her weekly press conference. "But we have to have a conversation about it. It's not just about the number; it's about the reason why and what our moral responsibility is as well. And the pope is, of course, asking for countries to take in [people]."

The comments come after Pope Francis over the weekend called on every parish to take in a refugee family. He is expected to address the refugee crisis during his joint address to Congress on Sept. 24 and his speech at the UN General Assembly the next day.

"Facing the tragedy of tens of thousands of refugees — fleeing death by war and famine, and journeying toward the hope of life — the Gospel calls, asking of us to be close to the smallest and forsaken," Pope Francis said in Munich. "To give them a concrete hope, and not just to tell them: ‘Have courage, be patient!'”

The White House has also indirectly invoked the pope's authority in making its case. Asked Sept. 9 if the administration would announce a Syrian refugee figure before the pope lands in Washington, spokesman Eric Schultz said President Barack Obama "does believe the United States has a moral responsibility to play a role in addressing this issue."

"That's why we've launched a review of options that are available to be responsive to the global refugee crisis," Schultz said. "And we're also in regular contact with countries in the Middle East and in Europe that have been greatly impacted by the increased refugee flows."

The papal imprimatur may prove helpful in overcoming concerns about welcoming thousands of mostly Muslim refugees. Republican leaders on the House Homeland Security Committee immediately criticized Thursday's announcement, arguing that the administration cannot properly vet Syrian refugees given the conditions in which they're leaving their country.

“Today’s announcement by the White House that the US will admit at least 10,000 Syrian refugees next year will put American lives at risk," said Rep. Peter King, R-N.Y., the chairman of the Counterterrorism and Intelligence panel. "I oppose this decision. We do not want another Boston Marathon bombing.”

Others made no secret of their animus toward Muslims.

"If they're Muslims, why don't we resettle [them] in the Muslim states?" asked Rep. Steve King, R-Iowa, a member of the Judiciary Committee's immigration and border security panel. "Wouldn't they be happier? They wouldn't have to transform a society. They would just fit in like a hand in a glove."

The Middle East nations of Turkey, Lebanon and Jordan have resettled the vast majority of Syrian refugees.

Leahy has been leading the charge for Congress to allocate an extra $415 million for refugee aid in his position as the top Democrat on the Senate foreign aid panel. While the president has sole authority to set the annual ceiling for refugees after consultation with Congress, federal agencies need extra funding to deal with increased numbers.

While the White House announcement may set up a showdown over funding, Steve King made it clear he doesn't think Congress can do much to stop the Obama administration from carrying out its plans. Rather, he predicted the issue would be fought out as part of the 2016 presidential debate.

"When has Congress redirected the president in any way?" he told Al-Monitor. "Right now it's a matter of politics and how much of this objection gets into the presidential debate dialogue."

"As Pope Francis has reminded us, this is an international problem that demands an international response," she said Sept. 9 during an appearance at the Brookings Institution. "The United States must help lead that response."

So has former Maryland governor and long-shot presidential candidate Martin O'Malley, who — unlike Clinton — is Catholic.

"On Sunday, Pope Francis called on people of conscience to come to the aid of 'tens of thousands of refugees that flee death in conflict and hunger and are on a journey of hope,'" O'Malley wrote in a USA Today op-ed Sept. 9. "We are watching as Germany, Austria and Scandinavia heed the call. The United States must not be a bystander on the sidelines."

On the Republican side, Sen. Lindsey Graham, R-S.C., the chairman of the foreign aid panel, has called on the United States to accept its "fair share" of refugees. Sen. Marco Rubio, R-Fla., has also been open to the idea, while others have been more hesitant.