Will Jordan agree to set up a 'safe zone' on Syrian border?

Jordan is considering the option of establishing a safe zone along its border with Syria, amid lack of US support for Turkey’s attempts to do the same on its southern border. 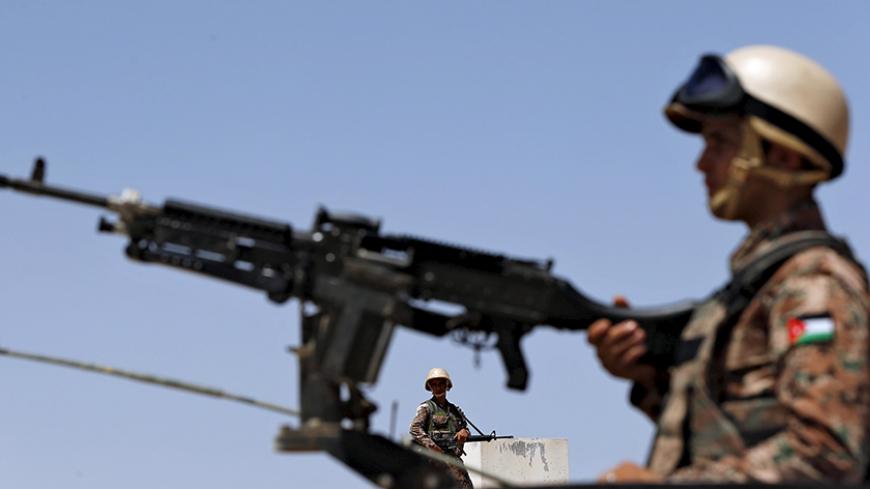 Jordan is weighing the risks and benefits of setting up a safe zone along its borders with Syria and is watching Turkey’s attempts to create a buffer or safe corridor in the north of the war-torn country, according to a source close to the Jordanian government who recently met with a senior government official. The source, who requested anonymity, told Al-Monitor that officials in Amman expressed interest in establishing a “safe zone and not a buffer zone with a depth of 60 kilometers [37 miles] into southern Syria,” but for this to happen, Jordan would need an international mandate. The source said that legal, logistical and political problems have put such plans on hold, and it is unlikely that a decision will be made unilaterally over this anytime soon.

The United States denies that it agreed with Turkey to set up a “safe zone” inside northern Syria as part of their campaign against Islamic State (IS) militants. This has added to Jordan’s reluctance. Feridun Sinirlioglu, undersecretary of Turkey’s Ministry of Foreign Affairs, told CNN Turk Aug. 11 that the two countries had agreed to create an area free of IS militants that would be 98 kilometers (61 miles) long and 45 kilometers (28 miles) wide, to be patrolled by members of the opposition Free Syrian Army. It was not clear if this would be a buffer or safe zone. “The control and protection of this region cleared of [IS] will be conducted by Syrian opposition forces and the necessary air defense and support for this … will be provided by the United States and Turkey,” Sinirlioglu said. According to Reuters Turkey, he hopes the zone will be a haven for more than 1.7 million Syrians who have fled across the border into its territory.

Until Aug. 16, there was no official comment on Jordan’s interest to establish a safe zone along borders with Syria. But on that day, Brig. Gen. Saber al-Mahayreh, head of Jordan’s Border Guard, told journalists touring the northern front that while the armed forces are keeping IS militants at bay, at least 70 kilometers (43 miles) from the borders, it would be a good thing if a safe zone was set up. But he added, “Such a zone needs the approval of the UN Security Council because it requires an infrastructure and security arrangements.”

Political columnist Omar Kullab told Al-Monitor that there are two views regarding the setting up of a safe zone. He said the first is backed by the military establishment — especially after the recent increase in incidents where projectiles have fallen on Jordanian border towns from the Syrian side. A mortar shell fell in a market in the border city of Ramtha June 25, killing one and injuring four. And on Aug. 13, six Jordanians were injured when a shell fell on a house in the same city.

The other view, according to Kullab, is that the political and security establishments are worried about Jordan getting further entangled in the Syrian scene. “Domestically, the safe zone will prompt Jordanians to call for the expulsion of Syrian refugees,” he said. “And externally, the safe zone requires huge logistical investments and may lead to Jordanian soldiers clashing with Syrian opposition or regime forces.” Kullab believes the political-security view will prevail in the end, especially in light of the lack of American support for this idea.

Proponents of the safe zone idea believe it will allow for the repatriation of more than 600,000 Syrian refugees, 80,000 of which are in the Zaatari refugee camp in northeastern Jordan. The rest are scattered in towns and cities across the Hashemite Kingdom. The Amman government continues to complain that the flow of international donations to help provide services to the refugees is decreasing, and such strains have compounded the economic difficulties of the Kingdom.

Head of Al Quds Strategic Studies Center and political analyst Oraib al-Rantawi believes that Jordan will not follow Turkey’s path in creating a safe zone along its northern borders. “Such a step will threaten the stability of Jordan’s north where population centers on both sides of the border are close,” he said. He added, “Without an international mandate, Amman will not risk venturing into southern Syria, especially as King Abdullah dismissed reports [on July 30] that Jordan was considering expanding beyond its borders.”

Jordan is part of a Military Operations Command that is based in Amman and is believed to provide logistical and military aid to members of the so-called moderate Syrian opposition in southern Syria. According to Al Quds newspaper’s correspondent in Amman, Bassam Badarin, Jordan has played a role in “foiling a recent campaign called Southern Storm to take over the Syrian strategic town of Daraa, because it was not sure if the Free Syrian Army will not be replaced by more radical groups like Jabhat al-Nusra or Islamic State fighters.” Badarin told Al-Monitor that Jordan is also keen not to antagonize the Syrian regime further. Damascus has repeatedly accused Jordan of supporting insurgents in southern Syria, something that Amman repeatedly denied.

Political columnist Fahd al-Khitan said that Jordan will not need to establish a safe zone in the near future. He told Al-Monitor that “unlike Turkey, which has been in collusion with extremist groups, Jordan was able from the beginning to build bridges with the moderate opposition in Daraa.” This, he said, helped “secure Jordan’s national interests and reduce the number of Syrian refugees.” Al Khitan added that Jordan “will not risk taking a unilateral action in Syria that may put it in the eye of the storm.”

The cost of maintaining military readiness in the northern areas is high, but despite occasional skirmishes with would-be infiltrators, the borders are secure. For now, Jordan is eyeing Turkish attempts to create a safe zone along its borders with Syria, but Amman is not yet ready to make a similar move.