Palestinian media outlets mine Israeli media sources for material to translate and present to their Palestinian readers, often using it to bolster their position and stick it to their political opponents. 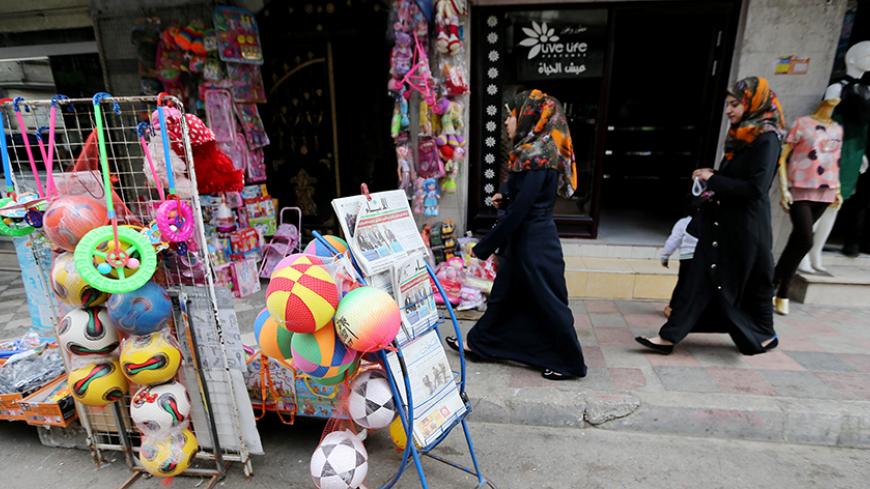 Palestinians walk past local newspapers, which feature the Israeli election on their front pages, in Khan Yunis in the southern Gaza Strip, March 18, 2015. - REUTERS/Ibraheem Abu Mustafa

When it comes to security incidents between Gaza and Israel, as well as the West Bank and Israel, Gazans follow Israeli media stories like breaking news. They also track news and statements issued by Israeli security officials and Israeli press reports about Palestinian officials.

Wissam Afifa, editor-in-chief of Hamas’ Al-Resalah, a biweekly newspaper in Gaza, said, “There is a great deal of interest [among Palestinians] in the sections of Israeli media translations. This is one of the most important sections in newspapers. Palestinians religiously follow it.”

Afifa told Al-Monitor, “We always like to publish news from Israeli media to show Palestinians the weak spots in Israeli society and strengthen the internal Palestinian front. This is important regarding security-related news.”

Afifa said, “The Palestinian political division is clearly reflected through Palestinian media outlets, which exploit news issued by Israeli media against their adversaries and widely publish this news in the Palestinian press.” For instance, media affiliated with or close to Hamas will highlight news potentially damaging or embarrassing to its rivals, like Fatah or the Palestinian Authority (PA) and vice versa, especially if it involves charges of corruption and communications with Israel.

Typically, Israeli reports disclosing information provided by Israeli intelligence sources draw different conclusions and have perspectives different from those relayed by Palestinian media. Take for example the Aug. 19 abduction of four Palestinians in the Sinai Peninsula. While Palestinian outlets reported that unidentified gunmen stormed the bus and took the four men, the Israeli news website Walla reported Aug. 20, “Egyptian intelligence abducted four Hamas naval commandos on their way to Iran.” This additional information about the abduction was neither confirmed nor denied by the Palestinian sources.

Ismail Muhra, who researches Israeli affairs, said the Palestinian media’s translations from the Israeli press are primary sources for local news websites. He told Al-Monitor, “The news is usually quickly transmitted as a Palestinian scoop if it reveals a piece of security information or leaks about Hamas, the PA or Palestinian figures. The news is also published without editing or revision.”

In December 2012 in the Gaza Strip, Hamas banned dealing with the Israeli press and prevented journalists from Gaza from working with Israeli media outlets. It also banned officials in Gaza from giving statements to Israeli media.

In February 2013, the Ministry of Education in Gaza decided to teach Hebrew in middle schools and eventually include advanced classes. In addition, some language centers began offering it as well.

Most Palestinian media outlets are affiliated with political factions. Over the years, the various factions have established newspapers, TV channels and radio stations as well as websites to publish news to bolster support for them and present their perspectives. Moreover, most of their journalists are young and lack proper journalistic training and experience.

Mustafa Ibrahim, a Palestinian writer, said that the Israeli media has a higher degree of credibility among Palestinians, because it enjoys more freedom and access than the Palestinian press.

The reasons behind the weaknesses within Palestinian media are varied. These include precarious financial situations and lack of professional journalism experience, Palestinian officials’ dereliction in dealing with the Palestinian media, the fledgling state of Palestinian journalism and media ties to political parties. In general, readers' interest in news and reports from the Israeli media can be explained in that Palestinians simply want information that can help them understand the reality surrounding them, regardless of its origin.