Nablus library seeks to catch up with modern times

The Nablus Municipality Public Library is a Palestinian cultural landmark, but its current inability to keep up with technological advances has limited scholars' access to its holdings. 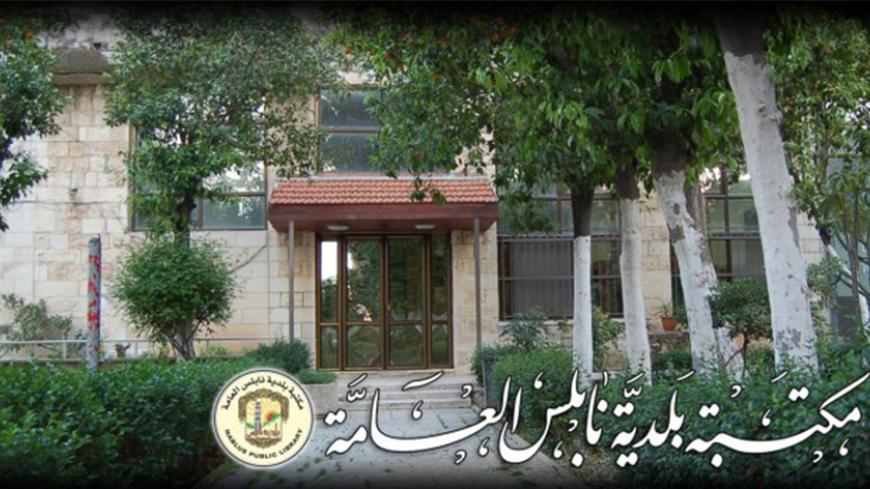 NABLUS, West Bank — On the second floor of the Nablus Municipality Public Library in the northern West Bank, the personal collection of Palestinian scholar Qadri Tuqan steals the spotlight with its rare items. The array consists of more than 5,000 books, references and manuscripts in both English and Arabic.

His collection also includes everything he gathered during his travels in search of knowledge around the world in the fields of science, mathematics and astronomy. In addition, it contains his desk and chair, as well as pictures of him with figures such as King Hussein bin Abdullah and Mahatma Gandhi.

Before he passed away in 1971, Tuqan asked for his collection to be donated to the library, in recognition of its role as the first public library in Palestine.

The city founded the Nablus Municipality Public Library in 1960 under a royal decree from King Hussein Bin Talal of Jordan. It gathered dozens of archival manuscripts from before the 1948 displacement of Palestians (the Nakba) up until the 1960s, a step that was seen as a cultural and civilizational revolution in the city — which at the time was full of intellectuals, writers and thinkers such as Tuqan.

The library’s director, Dirar Tuqan, told Al-Monitor, “This library was a cognitive and cultural turning point. It is the first public library in Palestine that depended on the Dewey Decimal Classification, which coincided with a cultural, intellectual and scientific movement in the city of Nablus.”

According to Tuqan, the current library building was erected by the Ottoman state in 1917 to serve as a rest house for senior Ottoman officers, at the then-farthest western part of the city.

“At the time, this building was one of the most luxurious Ottoman buildings. It was famous for its extremely well-kept garden, where flowers imported from Turkey were planted as well as Papaver [plants]. Throughout history, the building was used as headquarters for certain parties, a movie theater and headquarters for the municipality. It also sheltered families whose homes were damaged by the earthquake that hit the city in 1927,” Tuqan said.

The library also contains the personal collections of other Palestinian scholars such as Rasim Sweilem and Mohammed Ezzat Zuayter, as well as the Asir Library, which includes books from the Junaid prison and Nablus jail, after the Israeli forces’ withdrawal and the advent of the Palestinian Authority in 1994.

“There are books that date back to over 800 years, such as Al-Hadith al-Sharif collection and books about herbs and literature, some of which are in English. There are also 1.3 million documents, most of which date back to the Ottoman era and highlight the role of the municipality of Nablus, as well as an archive that dates back to the eras of the British Mandate, the Israeli occupation, Jordanian rule and the Palestinian Authority,” said Tuqan.

In addition, the municipality has the Sharia courts’ records of Haifa and Jaffa, as well as the archives of certain Palestinian figures in the 1948 period.

Library science expert Hani Jaber, director of An-Najah University Library, said, “The Nablus Municipality Library has been one of the oldest, most important and distinctive libraries in all of Palestine until this day. After its founding, the Jordanian Library and Information Association was established in 1963, and it was the first library in which people trained in library science in Jordan and Palestine. Despite the importance of this library and the one-of-a-kind documents and manuscripts it contains, it still relies on a traditional system in handling references and documents.”

“Ever since it was founded and for several years, the library had been a cultural beacon in both Jordan and Palestine. It should be given the attention it deserves to keep up with the times and be able to cope with the great technological development,” Jaber told Al-Monitor.

“These documents are supposed to be transformed into an electronic archive for safekeeping and in order to keep up with modern [technology] and development. This way, it would be available for students on the one hand, and avoid getting damaged or lost on the other. We need resources and an official administrative decision to improve the library because we have no Internet access to classify the books or search for them when needed, which makes it fall behind when it comes to [modern] development,” Jaber noted.

Tuqan said, “A plan has been set to improve the library, and it is on its way toward being implemented. The first step is to create a Web page for the library as part of the municipality’s website, after which we would classify the books and provide a summary for each. The plan also includes converting all physical manuscripts into digital copies and uploading them onto the library’s website.”

However, Jaber considers the plan late in coming, given the library's significance and historical status. “The plan should be comprehensive in order to modernize the library and connect it with other libraries in Palestine, so every student and researcher could easily access the cultural treasure it holds.”

Despite the delay in modernizing the library, students and researchers in Palestine have no alternative but to resort to using its manuscripts and priceless books, and to enjoy their time in the great nature of its garden overlooking Mount Ebal.